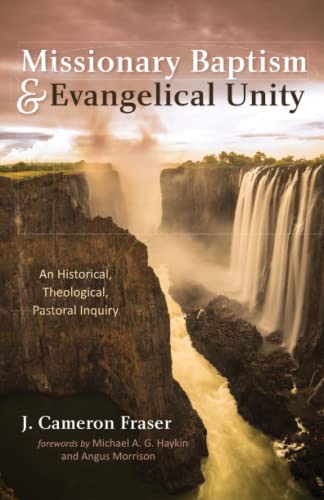 Written by J. Cameron Fraser Reviewed By A. T. B. McGowan
History and Historical Theology

When a book on baptism has two forewords, one by a Baptist and one by a Paedobaptist, it probably merits some attention. When the same book has commendations by Clair Davis, John Frame, Liam Goligher, David Feddes and Kenneth Stewart, the interest levels are raised further. When that same book offers the hope of evangelical union, it becomes almost irresistible!

J. Cameron Fraser was raised in a conservative Presbyterian denomination in Scotland but has spent most of his ministry among Dutch Reformed Christians in Canada. The purpose of this book is to examine the doctrine and practice of baptism with a view to seeking evangelical unity, despite varying practices. He does this by focusing on the “household baptisms” of the New Testament, which he calls “missionary baptism.” He argues that, in most Paedobaptist churches, the normal practice is infant baptism and that this has somewhat skewed their understanding of baptism. In missionary situations, on the other hand, where the majority of baptisms are of converts and their families, a somewhat different understanding of baptism develops. Similarly, in most western countries, individualism has caused churches to view baptism in a particular way, whereas in cultures where family and tribe are held to be more important than individuals, a different view of baptism often persists.

Fraser wants to argue that, if the missionary baptism position were to be held, then baptism would be seen in its true light. In such a scenario, adult baptism would be the norm and infant baptism would be seen in that light. To support this case theologically, Fraser looks to the Scottish 19th-century theologian William Cunningham. Fraser notes that Cunningham’s view of baptism stands in opposition to that of his friend and contemporary, Charles Hodge, who believed in presumptive election. It also stands in opposition to the view made famous by the Dutch theologian Abraham Kuyper, who believed in presumptive regeneration. Fraser sums up Cunningham’s position: “He believed that the biblical and confessional model was of adult (or believers’) baptism and that infant baptism, while defensible in its own right, was a modification of adult baptism” (p. 19). Fraser demonstrates that Cunningham was supported in this position by his colleague James Bannerman and by the later Principal of the Free Church College, John MacLeod. Cunningham went so far as to argue that, when the Westminster Divines wrote about baptism, it was adult baptism they had in mind.

Fraser is honest enough to present the case against Cunningham’s view of baptism (and particularly his view of the Westminster Divines), as argued by a formidable group of scholars: John Murray, Sinclair Ferguson, Bob Letham, Tony Lane, and David Wright. Despite this, Fraser continues to maintain that, at its heart, Cunningham’s view presents a strong basis for a new consideration of baptism. Rejecting the views of Hodge and Kuyper, Fraser presents his thesis in this way: “This study argues instead that a view closer to Cunningham’s will help clear up misunderstandings between fellow-believers, and further, that a dual practice of infant baptism and baby dedication will promote the unity of Christ’s church” (p. 41).

The remainder of the book consists of a defence of this thesis and a consideration of related issues, highlighting both individuals who have written on the subject and also the practice of the CRC church. There is a particular emphasis on covenant children and the contrasting (but yet similar) ways in which these children are treated in Reformed Presbyterian and Reformed Baptist churches.

It is a very short book, less than 100 pages, but what shines through is a passionate desire for evangelical Christians to be united and for a consensus (or accommodation) to be reached on the matter of baptism, so as to allow that greater unity which he seeks. Whatever your view of baptism and whether or not you are persuaded by the argument, this is a book worth reading.