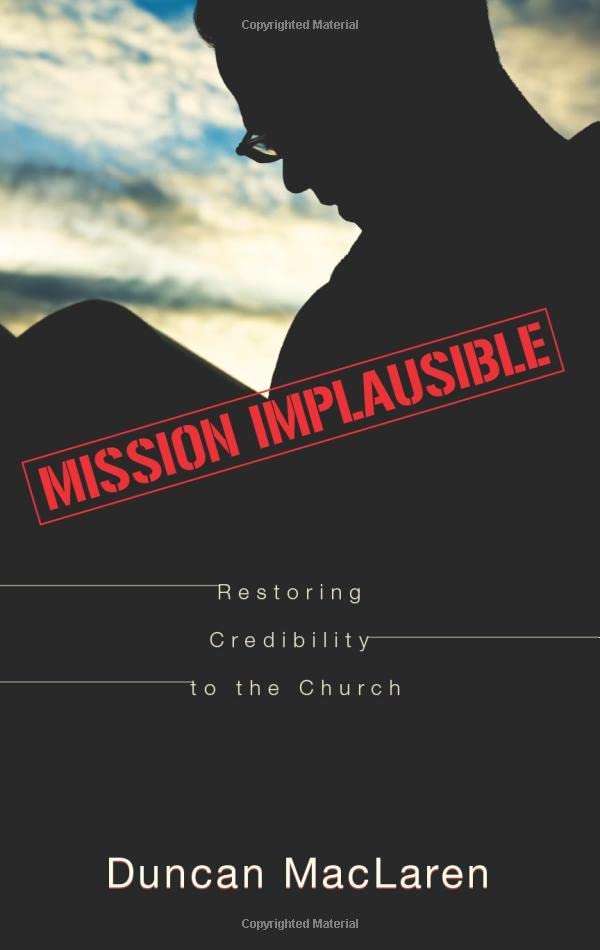 MISSION IMPLAUSIBLE—RESTORING CREDIBILITY TO THE CHURCH

One of the back-cover commendations of this book describes it as a study which ‘turns assumptions upside down and forces us to re-examine the rhetoric of much contemporary discussion on mission and emerging church in Britain’. This is an accurate statement in that Duncan MacLaren’s detailed analysis of the state of Western Christianity and the cultural context within which it undertakes its mission today, is far from conventional and does indeed challenge many widely held views concerning ‘mission to the West’.

At the heart of the book is a careful description of the work of leading sociologists of religion which charts the development of the theory of secularization within that discipline. MacLaren draws upon the work of scholars like Bryan Wilson, David Martin and Peter Berger and notices that the evidence which has accumulated from such analyses concerning the relationship between religion and modernity seems to be capable of supporting contradictory conclusions. On the one hand, it suggests an inexorable growth in secularization; churches continue to decline, and society grows ever more detached from the influence of the Christian story. The ‘strong’ theory or secularization uses such data to conclude (in the phrase used by the Aberdeen sociologist, Steve Bruce as the title of a recent study) that ‘God id dead’ in the West. Such an outcome may be deeply regrettable, but it looks to be the consequence of the embrace of modernity and the only future for religion will be found in sectarian enclaves at the margins of culture. And yet, other sociologists examining similar data reach quite different conclusions: while secularization is an undeniable reality, there are indications that it reaches a point at which it triggers a reaction in the form of what has been called ‘the return of the sacred’. Thus, Berger, whose own views on the subject have changed considerably over the years, can claim that the world is today ‘as furiously religious as it ever was’.

Duncan MacLaren’s thesis is (if I have read him correctly) that Christians have generally latched onto the first aspect of the sociological analysis, internalising the ‘secularisation story’ and shaping their ecclesiology and missiology accordingly. But what, he asks, might be the implications of the alternative interpretation of contemporary social and religious reality? What if the real challenge is less one that involves the communication of the truth of Christianity, and more that of restoring its credibility?

Much in this stimulating book is helpful; in particular I found the author’s prescription for the churches’ response to the situation he describes, his pathway to renewed credibility, to be worth serious reflection. However, the divide between MacLaren and those who advocate what may perhaps be described as the dominant view with regard to mission in the West, centres on two issues: how should we evaluate the legacy of the Christian past in Europe? And what approach do we need to take toward contemporary culture? So far as the first issue is concerned, the author challenges negative stereotypes concerning Christendom and denies that Europe has now decisively turned away from its Christian heritage. Christendom, he says, ‘represents the successful inculturation of the gospel in the societies of Europe’ and it ‘has by no means vanished’. The widespread assumption that Christendom is over, and even the tendency to welcome this fact, is here challenged on the basis that such a strategy ignores what could be ‘a valuable vehicle for mission’.

So far as the culture is concerned, MacLaren argues that it contains a multitude of points of contact for the presentation of the gospel, but that our assumptions concerning its secular character blind us to these. It is this that leads him toward the end of the book to make the radical proposal that in a consumerist society there is much to commend ‘consumer religion’ and that the consumer mentality may deserve our careful attention rather than ‘hasty condemnation’. Clearly there is a debate to be had here!

A final thought: Duncan MacLaren is an Episcopal Rector and one wonders how far the cleavage in missiological thinking which is highlighted by this study actually reflects a division between Anglicans (and others who affirm some form of established church) and those of us who represent various types of what was once called ‘nonconformity’? Attitudes toward Christendom and responses to Christianity’s present crisis in Europe are obviously shaped by these contrasting backgrounds and I suspect that a sociology-of-knowledge analysis would reveal the shaping influence these have. If that is so, then the debate between us needs to take place because, given the missiological opportunity which exists in Europe at the present time, we simply cannot afford to get these things wrong.