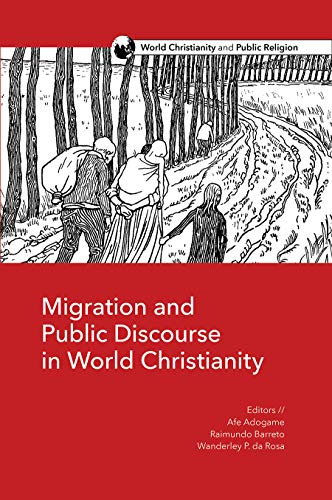 This book gathers fifteen authors from five continents to promote a worldwide interdisciplinary conversation on the theme of migration and public discourse in world Christianity. The book divides into five sections.

Part 1 (chs. 1–3) focuses on the impact of transnational networks and cross-cultural interactions in shaping religious identities and theologies. In chapter 1, Edmond Agyeman and Justice Richard Kwabena Owusu Kyei investigate how the engagements in transnational religious fields help to create space for construction of transnational religious identity among second-generation Ghanaians in Amsterdam. In chapter 2, Eduardo Albuqerque highlights the non-Catholic central Americans’ migration to the United States and the religious market exchange through the mega churches on both sides. Moses Biney, in chapter 3, discusses transnationalism, religious participation, and civic responsibility among African immigrants in North America. African immigrants are contributing their share to the good of all, both transnationally at a global scale and in their host countries through religious participation and civic engagement.

Part 2 (chs. 4–7) details the migrants’ experience and religious discourse. In chapter 4, Joao Chaves presents how Brazuca Baptist pastors are pushed to revise their “theopolitical” conservativism because of their church membership that is largely comprised of undocumented immigrants. In chapter 5, Shalon Park highlights the connection between Juche, Christianity, and subjectivity. The chapter discusses how North Koreans come to understand their identity (Juche) through conversion to Christianity in South Korea. In chapter 6, Sonia Maria de Freitas takes the case of Orthodox Russian immigration to Brazil and explains the resistance they have faced in Brazil because of their religious identity. In chapter 7, Janice A. McLean-Farrel looks at the feminization of migration. She argues that the Afro-Caribbean females’ lives in New York City are shaped by the intersection of family, faith, and personal development, drawn from both traditions and values of their countries of origin as well as the women’s lived experience in the country of destination.

The third part (chs. 8–10) brings out migrants’ own voice in developing theologies of migration. Christian J. Hong, in chapter 8, highlights the importance of intergenerational storytelling in the formation of identity, spirituality, religion, and theology. In chapter 9, Henrietta M. Nyamnnjon reflects on the lives of Cameroonian migrants in Cape Town, how they cope with their challenges by seeking God through Pentecostal churches trans-locally and transnationally. In chapter 10, Fabio Baggio presents a theological reflection on his concept from “neighborhood” to “proximity.” He uses four stories and Pope Francis’s four verbs in parallel with the parable of the Good Samaritan.

The fourth part (chs. 11–13) examines the role of migration, public policy, and civil discourse in theological formulation. In chapter 11, Luis N. Rivera-Pagan highlights the need for an ecumenical, international, and intercultural theological perspective that counters xenophobia with xenophilia, a concept that seeks to perceive issues from immigrants’ perspective. In chapter 12, Gioacchino Campese offers theological reflection on “refugee crisis.” In particular, it is not essentially a humanitarian and emergency crisis, nor a capacity and resource crisis, but a warning light of major structural change in Europe which leads to fear and xenophobia (p. 217). In chapter 13, Francisco Pelaez-Diaz reflects on Central American migration as the “Way of the Cross” for theological framing of the migrant. The reenactment of the Way of the Cross is the theological framework which helps denounce the violence directed to the immigrants and enables them to cross political/geographical, religious, and social boundaries.

Migration and Public Discourse in World Christianity has several strengths. One is the contribution of diverse views by authors from different continents. Another is the bringing of migrants’ own voices, their different stories, and practical experiences, to develop migration theology. The book also covers key issues in the discourse between world Christianity and migration. Some of the issues include theology of migration, transnationalism and identity, feminization of migration, and migration and civic responsibility.

The book also has some shortcomings. Even though it covers several issues, migrants’ stories, and experiences, it does not connect them so as to develop a comprehensive migration theology. For instance, the Ghanaian transnational experience and Korean intergenerational storytelling approach could have been brought together to better understand their commonality and develop a theological framework which works among the second-generation of both immigrant communities. Migration from the Arab world and public discourse in world Christianity are major phenomena in the contemporary migration yet are not discussed in this book.

Despite these concerns, I commend the book to students, professors, and church leaders who seek to better understand the interdisciplinary conversation on migration and public discourses in world Christianity.