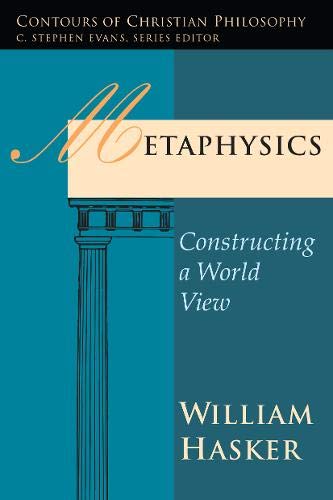 The aim of this series is to introduce readers to important philosophical areas with the strategic purpose of fostering a greater philosophical awareness among Christians particularly. This is of crucial importance and this particular book makes a solid contribution to the goal. It will be very useful to the theological student and also, I dare to hope, to the layman whose church is bothering to encourage intellectual Christian development.

The book begins with a ‘common sense’ type of justification of metaphysical issues and the necessity for such thought for believers. Metaphysical systems are to be evaluated in terms of ‘empirical fit’, inner consistency and explanatory power. The following three chapters deal with the great themes of ‘Freedom and Necessity’, ‘Minds and Bodies’, and ‘The World’, which underlines the fact that we are all, albeit unknowingly, metaphysicians. Hasker is particularly clear on the issue of freedom and necessity, and is fair to positions not cohering with a theistic interpretation. He deals with the ‘ghost in the machine’ issue of mind and body similarly, juxtaposing naturalistic and more idealist types of interpretation, before offering a tentative proposal of his own to satisfy both sets of demands. He has a useful sub-section on immortality and resurrection to jog not only the mind but also the imagination.

On ‘The World’ he again discusses realist and idealist proposals, and is helpful, to the likes of this reviewer with an arts background, in a review of scientific theory and metaphysical implications. The final main chapter ‘God and the World’ once more reviews the more positivistic and idealistic views, including Pantheism and Panentheism. He is very American in giving a sharp focus, and sympathetic consideration, to process theology. He prompts us to rethink the character of God’s relation to the world.

Altogether a fine little book. European readers could have asked for a review of a Hegelian idealist metaphysic, as well as the process view, because of the renaissance of Hegelian thought in such major theologians as Pannenberg and Moltmann, not to mention the dialectically structured New Hermeneutic. This book will, however, help students interpret subtle theologians such as Macquarrie and will stimulate theological enterprise, as well as being a good, solid, although by its own intention not comprehensive, discussion of key metaphysical themes.