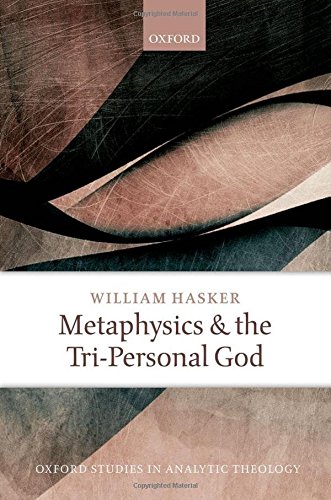 Metaphysics and the Tri-Personal God

William Hasker’s latest monograph, Metaphysics and the Tri-Personal God, marks the first installment of the new Oxford Studies in Analytic Theology series edited by Michael C. Rea and Oliver D. Crisp. This new series arises out of the burgeoning analytic theology movement comprising philosophers and theologians interested in utilizing the various “tools and methods of contemporary analytic philosophy for the purposes of constructive Christian theology” (p. ii). Hasker is not only a leading participant within analytic theology, but also a proponent of “Social trinitarianism” (henceforth, ST), or what some have called the “new orthodoxy” in Trinitarian theology.

Hasker contends that his contribution to the contemporary Trinitarian discussion will provide “an enriched theological synthesis” of the three major developments within trinitarian thought since the mid-twentieth century: (1) the recent shift in scholarly reception of fourth-century Trinitarian formulation; (2) the revival of interest in Trinitarian speculation instigated by Karl Barth; and (3) the new surge of interest in the Trinity apparent among analytic philosophers of religion (p. 1). This aim is accomplished in three parts. The first part is an attempt to demonstrate the essential continuity between fourth-century Trinitarianism and Hasker’s minimal ST. The second comprises a sprawling review of the twentieth-century literature on the Trinity, culminating in a series of issues that together establish the state of the question. Hasker finally develops his own constructive proposal by further refining the various components in parts I and II.

In “Part I: Trinitarian Foundations,” Hasker lays out a detailed account of ST based on a definition of the persons of the Godhead being “distinct centers of consciousness” (p. 22). His objective in this part is twofold: first, to show that his minimalist definition of ST is in accord with the pro-Social character of more recent renderings of pro-Nicene Trinitarianism (e.g., Lewis Ayres, Khaled Anatolios), and second, to demonstrate that this is an appropriate reading of the Fathers themselves (especially Gregory of Nyssa and Augustine). Positively speaking, Hasker’s minimalist definition by itself seems to avoid the most common pitfall of ST, namely, that it often contains too inflated a concept of perichoresis. Moreover, it is an immense task to show conclusively that early Trinitarian contemplation stands in alignment with ST. Although his claims here are debatable (among patristic historians), Hasker is to be commended for engaging the question. While Hasker’s new base definition of ST is intriguing, its success will depend on the cogency and synthetic coherence of his constructive proposal (considered below).

In “Part II: Trinitarian Options,” Hasker canvases the theological possibilities provided by four theologians and six contemporary philosophers. He first reviews and assesses the most definitive twentieth-century theologians on the Trinity: Karl Barth, Karl Rahner, Jürgen Moltmann, and John Zizioulas (pp. 85–108). Then, he provides similar accounts of Brian Leftow (pp. 109–118), Peter Van Inwagen (pp. 119–128), Jeffrey Brower and Michael Rea (pp. 129–138), William Lane Craig (pp. 139–146), Richard Swinburne (pp. 147–154), and Keith Yandell (pp. 155–161), who together comprise a majority of the analytic philosophers who have written on the Trinity. Hasker situates these various authors on a continuum that spreads from anti- to pro-ST, summarizing and responding to them each succinctly. The discussion is masterful in both scope and detail and, by itself, worth the price of the book for anyone trying to navigate the landscape of contemporary philosophical reflection on the Trinity.

“Part III: Trinitarian Construction” contains a step-by-step formation of Hasker’s own constructive proposal for the doctrine of the Trinity. The argument in its most basic form includes 8 steps, which are worth putting in summary form here:

The heart of Hasker’s approach is an analogical use of the metaphysical constitution theory that allows the persons together to obtain in one trope of deity, a single concrete nature. This stems from steps six and seven, but together, these eight steps in Hasker’s argument constitute a metaphysical answer to the Trinitarian question. That is, by the collocation of these eight interdependent arguments Hasker believes that he has provided an intelligible way of understanding the triune God of Christianity.

In his account, Hasker makes skillful use of various analytic concepts, but what remains unclear is the extent to which they (a) really do match up with fourth-century Trinitarian development, (b) cohere with biblical concepts, such as the divine processions, and (c) fit together to form a synthetically coherent Trinitarian Godhead. Altogether, however, Hasker’s proposal merits a meaningful response from theologians and philosophers of various philosophical persuasions. This book will serve as mandatory reading for anyone hoping to stay up to date on discussions of the Trinity within the discipline of philosophical theology, especially those doing analytic theology. It must be said that for pastors and students not accustomed to this approach, however, Hasker’s compendium of Trinitarian synthesis will most certainly prove to be a challenge.