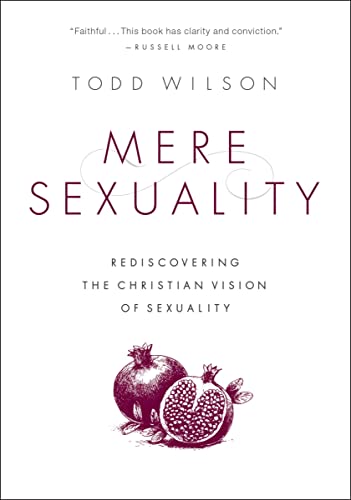 Questions about the “Christian sexual ethic” are never ceasing. No less is this true today than is the fact that the Christian sexual ethic has gone from being the dominant ethic of society—one nearly universally assumed—to one that is almost scorned at present. A radical moral revolution is underway in our society. From Obergefell to Bruce Jenner, the idea that sexuality is endlessly plastic and deferential to personal desire is the new modus operandi. Moral instincts and plausibility structures have shifted that result in the Christian vision for sexuality being less appealing and frankly, less tenable.

Enter Todd Wilson’s helpful, accessible volume, Mere Sexuality. In less than two hundred pages of what is physically a small book (meaning, it can be read quickly), the reader is exposed to a helpful primer on a vision for sexuality that is much broader than just narrowly focused proof texts. In Wilson’s owns words, his aim is to put the question of sexuality “in a larger theological context” (p. 14).

Of the issues the book addresses, homosexuality plays a major backdrop. And that’s because, as best as I can tell, Wilson sees how evangelicals have discussed homosexuality as evidence of how anemically we’ve addressed sexuality more broadly. For Wilson, the question is not first and foremost “why is homosexuality wrong?” in a narrow sense but why in God’s larger purpose for sexuality something like homosexuality is a deviation and rebellion against this original grand design. Too often, Christians base their judgments only in the negative, failing to depict their vision for sexuality in a larger affirmative framework.

But, first, what is “mere sexuality”? Reacting against a “truncated vision of human sexuality,” Wilson argues that Christians have “lost our grip on the deep logic that connects our created nature as male and female with how we ought to live relationally and sexually with one another” (p. 32). Wilson is impassioned with retrieving a grander vision for sexuality, one that he insists has a pervasive consensus within Christian history but has been presently overshadowed. The heartbeat of mere sexuality springs from the reality that that sexual differentiation—male and female embodiment—is morally and theologically foundational to human existence. We are not automatons. We are not asexual. That God created enfleshed humans with sexual capacity means that our design is bound up with our destiny: “We need to recover the moral logic behind Christian sexuality: how babies relate to marriage, and marriage to sex, and sex to identity, and identity to being male and female—and how all of this relates to the person of Jesus Christ” (p. 38).

One of the most compelling aspects of Wilson’s book is his reliance on the humanity of Jesus to understand the sexuality of Jesus. Jesus had a Y Chromosome. He was birthed through the vaginal canal of his mother, Mary. Jesus was sexual, Wilson insists; not sexual in that he engaged in a romantic relationship, but sexual because he was an enfleshed, sexually differentiated human. Jesus was not hermaphroditic or just a spirit. He was, and is, a man. Though God could have manifested his deity in any number of ways, “he chose to reaffirm the basic binary sexuality by becoming a man” (p. 45). This may seem like a fact to overlook, but Wilson makes the provocative observation that the narrative of Scripture is unveiled through sexed realities: A baby boy was born of a woman. To downplay the centrality of the sexed experience in Scripture is to downplay how the narrative unfolds and its centrality to our own experience. The incarnation represents God’s profound blessing of the embodied experience, and the resurrection is God’s reaffirmation that sexed matter, well, matters.

But here, Wilson makes an even more interesting turn that rebuts so much of the sentiment running through our culture and through progressive Christianity. By looking at Jesus, “we learn that sexual activity isn’t essential to human flourishing or personal fulfillment” (p. 49). This is a particularly helpful insight because it rebuts the insistence that sexual fulfillment is necessary for human flourishing. More than that, it exposes the argument that Jesus was unfulfilled or underwent some type of dignity harm because he never had sex as a form of Docetism—the heresy that denied that Jesus was fully human. It’s at this exact point that Wilson helpfully critiques all attempts to elevate sexual desire to the level of personal identity. In a punchy quote from Oliver O’Donovan, Wilson cites him arguing against the rise of “psychological positivism” (p. 67).

Wilson goes on to explore in greater detail the meaning of our sexual complementarity, the idea that men and women come to know what it means to be a man or woman in reference to their counterpart. Here, I applaud Wilson for his careful analysis of the meaning of the “one flesh” union, the symbolic yet visceral description of the sexual union of man and woman that seals the covenant union, but is also capable of bringing forth new life. It is the procreative element that makes the marriage union deeply and ontologically corporeal. As Wilson writes, the rejection of the procreative primacy of the one flesh union results in the inversion of sexuality more broadly. It turns it into a recreational activity instead of a solemn activity shared within the context of covenant. Here I want to commend Wilson for speaking forcefully against same-sex marriage and less forcefully, though still cautiously, about contraception. In Wilson’s view, these contemporary realities indicate a vision for sexuality that vitiates the biblical picture of sexuality. In place of the comprehensive union that the Bible speaks of, same-sex marriage facilitates emotional union only. And instead of orientating marriage toward the reality of children, contraception thwarts bodily design and subjects the begetting of children to the pleasure of those engaging in sexual intercourse. Wilson should be commended for introducing natural law types of arguments without necessarily stating his reliance on natural law (fraught as that conversation can be with Protestants).

The last thing I’ll highlight is Wilson’s call for a reinvigorated concept of friendship. According to Wilson, “singleness” as a category within the church is sub-biblical. As he writes, “Singleness isn’t a particularly biblical idea. In fact, the language of being single assumes that marriage is the preferred norm, which it isn’t” (p. 118). While I would quibble with his notion that marriage is not the “norm,” I do think Wilson is onto something powerful. We form better friendships when we realize that marriage is not the resolution to all loneliness and human existence. Marriage is not self-sufficient to overcome every human longing. As much as I value marriage, Wilson is right to call Christians to a view of marriage that does not exalt it beyond what it was originally designed for. Once we do, we realize that those whose who are not married are not defective or odd, but capable of teaching those of us who are married what intimacy and depth can look like in friendship without it being sexualized.

Wilson’s book is stellar and warmly recommended. The one shortcoming in an otherwise terrific book is Wilson’s failure to be more fulsome in defending the intelligibility and universality of the Christian sexual ethic to broader human society. To be fair, he broaches this subject, but where he could have offered more explanation that would bolster Christian confidence in explaining how our ethics are creational (meaning, not simply sectarian), he did not. And this is probably the book’s only real weakness. At a time when Christians are having difficulty explaining the relevancies of Christian sexual ethics to the broader culture, we need to learn that we are not irrational or simply fideistic in our beliefs about how God made every human being, male or female.