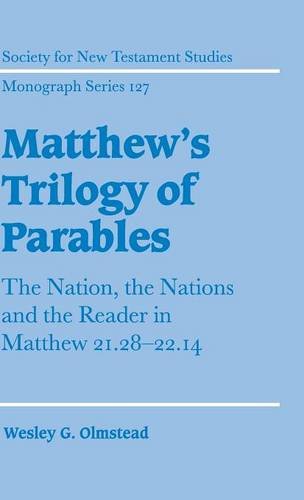 This book is a revision of the author’s PhD thesis at King’s College London completed under Professor Graham Stanton in 1999. In it Olmstead argues that rather than the trilogy of parables (that of the Two Sons, the Tenants and the Wedding Feast) asserting judgement upon Israel’s leaders, they instead announce judgement upon Israel as a whole, simultaneously pointing to the future inclusion of the nations (including Gentiles) in the nation that God had promised to raise up from Abraham.

The first section serves as a ‘Prolegomena’ to the study, and consists of chapters 1 and 2. The first chapter (‘Introduction: Of Authors, Readers and Approaches to the Parables’) is a helpful introduction to methodological approaches to reading the Gospels in general and parables in particular. Olmstead’s second chapter (‘Matthew’s Trilogy of Parables: 21:28–22:14’) surveys the different theories of composition and interpretation of the trilogy based on the recent scholars which propose them.

The next section examines the trilogy from a narrative-critical perspective and includes chapters 3, 4 and 5. Chapter 3 (‘Jesus’ Encounter with Israel: The Nation, its Leaders and their People’) surveys Matthew’s portrait of the nation of Israel and devotes special attention to the contrasting characterisation of the Jewish leaders and the people, concluding that the judgement that this trilogy announces falls upon Israel and not only upon her leaders, though they remain chiefly responsible for the nation’s catastrophic fall. Chapter 4 (‘Jesus and the Nations: Characterisation, Plot and the Reception of Matthew 21:28–22:14’) argues that these parables point to the future inclusion of ‘the nations’ (ta ethne) in ‘the nation’ (to ethnos) that God had promised to raise up from Abraham. Chapter 5 (‘A Narrative-Critical Reading of the Trilogy’) focuses upon the reader, offering a narrative-critical reading of the parables that pays special attention both to their setting in this trilogy and to the rhetorical strategies employed in the trilogy that seem designed to entangle the reader in the concerns of these stories and to shape his response to the parables.

The final section considers the trilogy from a redaction-critical perspective (ch. 6) and is followed by a conclusion (ch. 7) and an appendix. Chapter 6 (‘The Trilogy in Redaction-Critical Perspective’) focuses upon the author, employing a more traditional redaction-critical approach that highlights the distinctive Matthean features of the trilogy, but once more brings the results to bear on the question of anticipated response and contends that the trilogy builds towards the paraenetic climax achieved at 22:11–14. Chapter 7 (‘Conclusions’) is followed by an appendix (‘The Text of the Parable of the Two Sons’), which offers a fresh analysis of the parable of the Two Sons complex text-critical problem. The volume uses endnotes, has a bibliography, an index of passages and another of topics and authors.

Olmstead’s thesis seems quite plausible, though he has a tendency to conflate quickly such issues as judgement and destruction and Jewish leaders and common people and gives no attention to texts which seem to affirm either the cult (5:23–24; 8:4; cf. 23:21) or the priesthood (8:4; 17:27; 23:3). Nevertheless, this book is particularly admirable for bringing together the often mutually exclusive tools of literary and redaction criticism, and it opens the door for further exploration of the corrective they can serve to one another in ‘composition’ criticism.