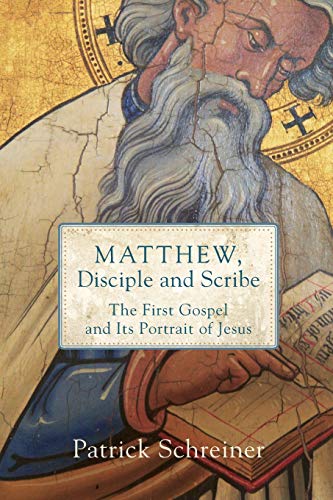 Matthew, Disciple and Scribe. The First Gospel and Its Portrait of Jesus

In this volume on Matthew’s narrative theology, Patrick Schreiner elucidates the portrait of Jesus found in the First Gospel and with it the role of the author as faithful disciple and scribe. Schreiner takes his cue from Matthew 13:52: “Therefore every scribe who has been trained for the kingdom of heaven is like a master of a house, who brings out of this treasure what is new and what is old.” Matthew, according to Schreiner, is a “discipled scribe,” who “expounds the wisdom of Jesus by becoming a scribe and teacher to future generations, mediating the instruction of his sage” (p. 2).

Part 1 (chs. 1–2), “The Scribe Described,” presents the thesis and sets out the methodological parameters of the study. “Matthew, the Discipled Scribe” (ch. 1) becomes wise by learning how to interpret Torah from his sage-king and then passing that wisdom on through writing. By calling and training disciples, Jesus establishes a new scribal school at odds with the old scribal tradition, passing on the true wisdom of the kingdom of God.

Chapter 2, “The Scribe’s Convictions and Methods,” sets out Matthew’s conviction that Israel’s hopes have been fulfilled through the arrival of the apocalyptic (= mystery-revealing and new-age creating) sage-messiah. Since Jesus has fulfilled all things, Jewish history (and all history) is now unified. All the events of Israel’s history (exodus, exile, etc.) are now seen through the lens of the Jesus event. Consequently, one can read Matthew’s Gospel most profitably by asking three questions. How does this echo Israel’s story? How does Jesus fulfill Israel’s story? And how does it move the story of Israel forward? (p. 8)

Rather than adopting just one term to describe Matthew’s use of the Old Testament (typology, intertextuality, inner-biblical exegesis, figural representation, etc.), Schreiner is eclectic, using the general term “shadow stories” to comprehend Matthew’s broad vision of fulfillment, which encompasses persons, events, institutions, things, offices, and actions. Matthew also reads the OT text both retrospectively and prospectively. “He sees things latent in the OT text before Christ’s advent and also sees things that can be recognized only retrospectively, after the coming of Jesus.” (p. 57)

Part 2, “The Scribe at Work” (chs. 3–7) shows by illustration how Matthew brings forth things old and new by describing Matthew’s presentation of Jesus as persons (David, Moses, Abraham, Israel) and concepts (kingdom, exodus, family, exile). Jesus comes as Moses accomplishing a new exodus and as the nation Israel, passing through exile to restoration. This is storied Christology. Chapters 3 (“Jesus and the Journey of the Davidic King”) traces Davidic messianism in Matthew’s birth narrative and passion. Through the motif of journey, Jesus, the legitimate heir to the throne, follows in the footsteps of David through appointment, conflict, exile, and enthronement to ultimately install and reunite the kingdom. For Matthew, kingship is the “root metaphor” to describe Jesus, around which all other images revolve. Matthew’s birth narrative is permeated with royal and Davidic themes, from the genealogy, to the birth in Bethlehem, to the title “king of the Jews,” to the visitation of the magi (= kings), and the identification of Jesus as a Nazarene (= the “branch” of Isa 4:2; 11:1; Jer. 23:5; 33:15). At the climax of Matthew’s story, Jesus returns to Jerusalem in the same way that David returned from exile (after expulsions by Saul and Absalom) to claim his throne. Yet this throne is achieved shockingly not through conquest, but through suffering and death—an enthronement on the cross as Isaiah’s servant of the Lord.

While chapter 3 deals with Davidic messianism in the birth narrative and the passion narrative, chapter 4 looks at Jesus’s activities in Galilee (= exile) through three specific actions: living out the law, functioning as the righteous shepherd watching over the flock, and enacting justice as the Davidic merciful healer. While most commentators focus in the Sermon on the Mount on Jesus as prophet, Schreiner emphasizes his continuing function as king, embodying and living out the law. In contrast to the religious leaders, who are false shepherds, Jesus is the true shepherd king after the model of David (five Matthean texts employ shepherd imagery: 2:1–6; 9:32–38; 15:21–28; 25:32–46; 26:30–35). Finally, Matthew uniquely links Jesus’s healing activity to the title “son of David.” Although David was not known as a healer during his life, prophetic texts from Isaiah 11 and Ezekiel 34 emphasize that the coming Davidic king would heal the nation.

Chapter 5 examines Mathew’s presentation of “Jesus in the Mosaic Exodus.” As with his study of David, Schreiner looks beyond the explicit references to Moses to broad ways that Jesus’s story follows that of Moses. Jesus not only fulfills the role of Moses, he exceeds it. While Moses delivered Israel from slavery in Egypt, Jesus delivers from slavery to sin. While Moses received the law, Jesus fulfills the law. While Moses fed the people with manna in the wilderness, Jesus prepares the messianic banquet on the mountain of God, etc. (p. 167).

In chapter 6, “Jesus and Abraham’s New Family,” Schreiner moves from David and Moses to Abraham. While David is associated with kingdom hopes and Moses is linked to the new Exodus, Abraham is defined by familial metaphors. Abraham was promised that through his family all the nations on the world would be blessed. Abraham’s children are now all who do the will of God (Matt 12:50).

Chapter 7, “Jesus and Israel’s Destiny,” presents Jesus as fulfilling Israel’s story. Not only is Jesus the new Adam, Abraham, Moses, Joshua, David, Solomon, Elijah and Jeremiah, “but Matthew also has Jesus recapitulate a broad chronological structure of the history of Israel, and therefore stands as the new Israel, who leads his people out of exile.” He comes out of Egypt, is tested in the wilderness, returns from exile, and rebuilds the temple (p. 239). Where Israel failed to be God’s light for the nations, Jesus succeeds.

The book concludes with a chapter reviewing Schreiner’s results and describing the discipled scribe as one who faithfully follows Jesus, wisely interprets the law, and lives it out in their daily lives by practicing justice and mercy.

There is much to commend in this volume. Schreiner demonstrates a solid mastery of Matthean theology and writes with an energetic style, suggesting a genuine enthusiasm for Matthew’s agenda. Schreiner’s description of the theme of fulfillment in Matthew is also particularly helpful. He rightfully points out that “fulfillment” for Matthew is not always tied to predictive prophecy, but rather means that “Jesus fills up Jewish history, he completes the time of Israel, and he brings Israel to its logical telos” (p. 39).

Another strength of Schreiner’s work is the breadth of Matthean scholarship that he draws from, and his inclusion of a wide range of perspectives. When it comes to background proposals, intertextual connections, and other debated issues, Schreiner tends to be less contrarian and more inclusive (more “both … and” than “either … or”).

Of course, the most innovative parts of an author’s work can also be the most problematic. I was not convinced, for example, that Mathew is intentionally modeling Jesus’s ministry after the chronology of David’s life (ch. 3). It seems a stretch, too, to say that the gifts of the magi indicate the return of the temple treasures taken during the Babylonian exile or that Nazareth is meant to indicate a place of exile from the Davidic king’s true city.

There are other minor points of Schreiner’s presentation that I would not necessarily affirm, such as the claim that Matthew views Jesus’s crucifixion as his enthronement as the Messiah (pp. 93–99). It seems more likely to me that Matthew, like Luke, sees the enthronement announced in Psalm 110:1–2 as fulfilled at Jesus’s ascension/exaltation/enthronement rather than on the cross.

Despite these minor issues, this is an exceptionally well-researched, well-organized, and well-written volume that gets to the heart of Matthew’s theological portrait of Jesus.