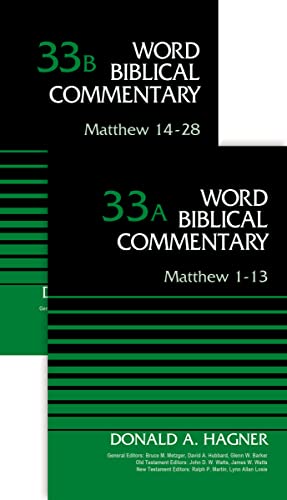 At last this long-awaited work by the George Ladd Professor of New Testament at Fuller Seminary in California is complete. These two volumes rank with the best the Word Biblical Commentary has produced to date. Hagner sees Matthew’s writing as largely historical narrative. He follows Markan priority and a form of the Q-hypothesis that admits the possibility of the apostle Matthew having penned a first draft of the logia of Jesus in Aramaic (so Papias). The final Greek draft we have maybe the later work of a disciple of Matthew’s, still pre-70, written to help Jewish-Christians understand their faith as the fulfilment of the hopes of Israel. It is also based on a generally stable and reliable oral tradition. Hagner discerns no detailed structure beyond major groupings of pericopes.

As we have come to expect of the WBC, each passage is introduced with thorough bibliographies and helpful, fresh translations. The ‘Form/Structure/Setting’ sections are not as helpful as some in the series, generally being limited to brief comments on narrative flow and subdivisions, an itemized listing of the differences between Matthew and his sources, and occasional comments on historicity. This ‘Comment’ sections, however, are uniformly strong. Hagner has clearly read a remarkable amount of the literature in his bibliographies and interacts with a broad cross-section of it, yet without overwhelming the reader with parenthetical data (both contra various other volumes in the WBC). The commentary blends the best of conservative and mainline contributions to scholarship. Specific interpretative positions adopted usually convince and always are worth considering. The ‘Explanation’ sections are brief but capture the heart of each passage without unnecessary repetition from previous sections.

Illustrations of the numerous strengths of Hagner’s exegesis would include his handling of typology in Matthew 1–2 and the Sermon on the Mount as kingdom ethics: ‘a proper antidote to a Paulinism that (unlike Paul himself) champions a gospel of cheap grace’ (p. 192). Jesus fulfils the law (5:17–20), including the Sabbath (12:1–14), by ‘bringing it to its intended meaning’ in his own person and teaching (p. 106). Hagner correctly stresses Matthew’s christological focus in the miracles (chs 8–9, 14), the role of chapter 16 (Peter’s confession) rather than chapter 13 (parables) as the key turning point in the gospel, and the need for a limited recognition of allegory in the parables. Jesus did intend to found a messianic community (the ‘church’), actually predicted his sufferings and death, and viewed the latter as substitutionary (20:28). Hagner sensitively handles the ‘anti-Semitic’ passages in chapter 23 and the passion narrative without denying their authenticity or generalizing beyond their immediate historical context. He recognizes that the ‘parable’ of the sheep and the goats is not about helping all the needy in the world but about the nations’ responses to Christian witnesses (25:31–46). And he closes volume two with a vibrant defence of the historicity of the resurrection of Jesus.

Occasional questions might still be raised about this or that interpretation. Hagner seldom considers the possible influence of pre-Markan sources in the material Mark and Matthew share; hence, the exception clause in 5:32 and 19:9 must be inauthentic. He demonstrates a marked ambivalence to harmonization. For example he believes that Matthew and Levi must be the same person, and he solves the contradiction with Josephus in 14:3–4 by allowing for there to have been two Herod Philips. Yet he dismisses as inappropriate all of the proposed harmonizations of John and the Synoptics concerning the date of Christ’s death and abandons any attempt to harmonize the resurrection narratives in detail (notwithstanding the fact that an entirely convincing harmonization was made by the very professor after which Hagner’s chair is named—G.E. Ladd, in I Believe in the Resurrection of Jesus (1975)). In two instances, Hagner argues that pairs of similar miracles are doublets—variant accounts of only one historical event (the feedings of 5,000 and 4,000 and miracles of sight for the blind in 9:27–31 and 20:29–34). The resurrection of the saints in 27:51–53 never happened; it is a piece of ‘realized and historicized apocalyptic’ (p. 851). Perhaps the biggest weakness of all is Hagner’s treatment of Matthew 24 and related eschatological material. In a curious inversion of Schweitzer, Hagner believes that although Jesus clearly separated the destruction of the temple from his second coming, the disciples, including Matthew, could not imagine the former without the latter, and so made the two indistinguishable in the Olivet discourse. The bottom line of the excursus on p. 711 is that Matthew misunderstood and was convinced Jesus would return in the first century.

These caveats notwithstanding, the commentary overall is a masterpiece. Luz and Davies/Allison will be the exhaustive, critical standards for years to come. Evangelicals have already been well served by the short contributions of Carson and France (and, I could hope, perhaps by my offering in the NAC series). But for a length of treatment in between these, Hagner’s stands as unrivalled. Here will be all any pastor or lecturer could normally want or use, and much of what scholars in their more detailed studies need. Anyone considering writing a commentary on Matthew today, unless it is for some highly specialized purpose or unique audience, should invest their efforts in a less duplicated enterprise. Hagner has rendered most commentary-writing on Matthew redundant, at least for a generation.