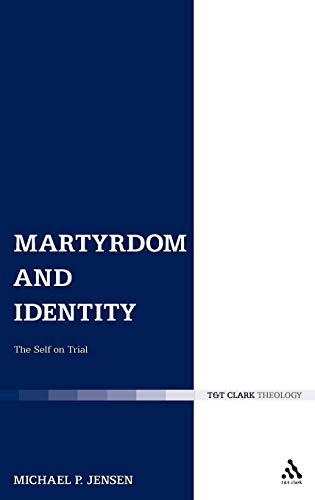 Martyrdom and Identity: The Self on Trial

Many theological and philosophical discussions concerning humans of late have centered less on questions of human essences or capacities and more upon the question of the self and human identity. In his book Martyrdom and Identity: The Self on Trial, Michael Jensen puts various versions of the self to the test of Christian martyrdom. That is to say, any theory of the formation of the self that cannot accommodate the possibility (or reality) of martyrdom fails to be a viable Christian option.

In an introductory chapter, Jensen introduces his theme and approach. Central to Jensen's project is the narration of the self. Jensen points to many prominent figures (e.g., Paul Ricoeur, Alasdair MacIntyre, Charles Taylor, and Anthony Giddens) who have argued for the role of narrative in the construction of the self. To the issue of narrative Jensen adds two further elements in a view of the self: (1) a view of the good and the path to its achievement and (2) a description of the nature of relationships between selves. Jensen proposes to use these three elements as questions posed to various accounts of the self available in the contemporary discussion.

Jensen then turns to consider two specific versions of the self in the philosophy of Charles Taylor and in the narrative of Salman Rushdie. Jensen interacts primarily with Taylor's The Ethics of Authenticity rather than with Sources of the Self or A Secular Age. Ultimately, Jensen determines that Taylor's retrieval of authenticity falls short of offering a truly Christian rendering of the self that can incorporate martyrdom. Jensen's critique of Taylor, however, is insufficiently developed. Jensen likewise applies the questions of the narrated self, the good, and relationship among selves to the view of the self espoused in Salman Rushdie's The Satanic Verses. Rushdie rejects the notion of the narrative of the self including martyrdom because it tends toward a victim mentality and is often distorted to devastating effect. Jensen counters that Rushdie disallows the rich understanding of religious belief that lies behind true Christian martyrdom and ends up only endorsing a form of self-determining freedom, a view whose track record is no less marred than that of religious martyrdom.

From his application of Christian martyrdom to selves suggested by Taylor and Rushdie, Jensen dedicates four chapters to consider the alternatives to martyrdom (and the alternative narratives of the self that they entail) offered to Thomas Beckett by the four tempters of T. S. Eliot's Murder in the Cathedral. In each of these chapters, which are resistant to brief summary, Jensen exegetes the temptation in Eliot's script, then presents the work of a contemporary thinker whose work on the formation and narration of the self parallels the temptation Thomas faces. He concludes each chapter by tracing themes through the biblical narrative that serve as a corrective to the way of life suggested by the tempter's and contemporary's voice.

One example will suffice. In the first temptation, Thomas is reminded of past harmony in his relationship with the king, now estranged. Though the current situation is out of his control, Thomas, motivated by the pleasant past, is tempted to pursue a risk-management procedure to increase the chance of security and open the possibility of reconciliation. Jensen sees this temptation to be similar to Martha C. Nussbaum's advocacy of a passive/active position in contrast to martyrdom's more strident activism. For Thomas this would involve tempering his commitment to Christ so as not to exacerbate the situation. Jensen counters the tempter (and Nussbaum) with the biblical orientation not to the past but to the promises given about the future. He also gives attention to the biblical presentation of the place of ease and security, themes central to the temptation and to Nussbaum's position. Succeeding chapters attend to the temptations to collaboration, idealistic opposition, and honor and reward. These chapters find Jensen interacting with the pragmatism of Richard Rorty, the patriotic vision of Roger Scruton, and the Greek honor ethic. The biblical-theological themes surveyed are equally broad.

In closing chapters Jensen explains the link between martyrdom, temptation to other narratives, and divine providence in the narration of the self. To demonstrate the integration of these elements, he reviews a recent production of Eliot's play that was evacuated of its religious and theological content to disastrous effect on its narrative coherency.

Perhaps what is most challenging about this book is the immense amount of philosophical, theological, and biblical terrain that it seeks to cover. In each of the four main chapters to survey the work of a major thinker, exegete the text of Eliot's play, and bring not mere biblical passages but distinct biblical themes and storylines to bear is ambitious. Jensen's survey of countervailing biblical themes is sweeping yet selective and space disallows consideration of dissonant themes in the biblical narrative.

Jensen's work is interesting both materially and formally. The issues of self and identity are not only au courant but useful in articulating the gospel in the contemporary milieu. At the same time, Jensen's incorporation of narrative both in the critique of a view of self as in Rushdie's work and as a heuristic device through the use of Eliot's play is unique, though not without flaws. It embodies a narrative approach to theology that succeeds in the application of narrative theology where so many texts about narrative theology have failed. Yet, while the themes that Jensen addresses may have broad relevance and appeal, the target audience of his book is considerably narrowed if not by the price, then by the broad range of prior knowledge that the book assumes. Accordingly, it will find its greatest use in anthropology classes at the graduate level.