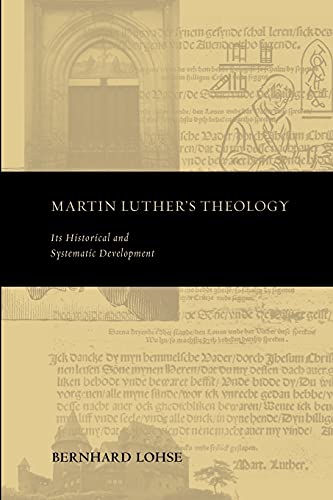 Professor Bernhard Lohse has left us this magisterial treatment of Martin Luther’s thought. A lifetime’s engagement with the theology of the reformer has resulted in a generally reliable guide, full of measured and mature judgements, and detailed interaction with the primary material. The distinctive feature of this volume arises from the author’s awareness of the ease with which modern interpreters have read their own concerns and perspectives into Luther’s writing. Lohse is convinced that Julius Köstlin, who produced a similar work one hundred years before him, was on the right track when he decided to approach Luther’s theology from two different perspectives. The first was in terms of its historical development, and the second in a systematic presentation. Both men have held out the hope that as these two perspectives are brought together the distorting influence of contemporary issues might be minimalised.

The first section of the book sets the scene for examination of Luther’s thought in the context of the sixteenth century. The situation in the church of the period, the particular academic ethos in the universities of Erfurt and Wittenberg, and the atmosphere and character of Luther’s homelife are examined in outline. This leads Lohse into his second section, a study of Luther’s theology in its historical development. The major phases of Luther’s life, the events that surrounded him and the major pieces of writing he produced in those contexts are studied chronologically. A sense of the development of Luther’s thought, the gradual abandonment of some of the methods and presuppositions of his teachers, the refinement of his own insights in the face of controversy, and especially the occasional rather than systematic structure of much of his thinking is highlighted by such a method. The third section looks at various aspects of Luther’s thought in a more logically structured way, beginning with Sola Scriptura and concluding with Luther’s view of the end and an excursus on his attitude towards the Jews.

Lohse’s volume has much to commend it. However, it is not beyond criticism. Three points are worth mentioning here. Firstly, Lohse attempts to cover so much material in such a short space that at points the treatment must be frustratingly brief. Luther scholars will be left crying out for more. Some important questions are not dealt with, Secondly, on a few occasions Lohse seems unable to detach himself from the reigning consensus among Luther scholars. This is particularly evident in the chapter on Scripture where he perpetuates Barth’s misquote from the Adventspostille: ‘no book but Holy Scripture can comfort … for it contains God’s word’ (188). In the original context it is the believing ‘soul’ (die seele), rather than ‘the Holy Scripture’ (die heyligen schrifft), which ‘takes hold of God’s word’ (sie fasset gottis wortt). Modern Luther scholarship has been reluctant to acknowledge the directness of Luther’s appeal to the biblical text as the Word of God and Lohse proves to be no exception. Thirdly, there are a number of annoying errors in the translation which should have been picked up. On page eight ‘toward the end of the sixteenth century’ translates ‘in den späten dreißiger Jahren des 16 Jahrhunderts’, distorting the chronology of Luther’s debates over law and gospel. On page 13 Lohse is made to say that ‘even Thomists and Augustine himself followed Occam’, an obvious anachronism which arises from a mistranslation of ‘und selbst Augustiner’.

Despite such minor blemishes, this is a volume that anyone seriously interested in Luther’s theology will want to own and study. Here is Professor Lohse’s impressive legacy to the next generation of Luther scholarship.