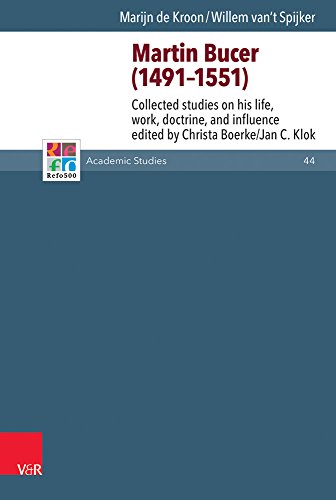 In recent years, an upsurge of interest in Reformation and post-Reformation figures has been seen the continuing stream of monographs on John Calvin, contributions to the study of Luther, and the recent translation of Peter van Mastricht’s magnum opus, to name a few. Yet, Martin Bucer remains for those less acquainted with Reformation history something of a footnote in the life of John Calvin. As Herman J. Selderhuis notes in the introduction to this volume, “research of the biography and theology of Martin Bucer … can still be called rather new” (p. 15).

This brings us then to the aim of this book. Recognizing the relative lacuna in Bucer studies, this work offers essays by De Kroon and Van’t Spijker, two widely recognized Dutch Bucer scholars, in order “to stimulate Bucer-research” (p. 15). The essays are divided into seven different sections: (1) Bucer and tradition; (2) Bucer compared with Calvin; (3) Bucer involved in dispute; (4) Bucer and justice; (5) Bucer’s person; (6) Bucer and city reformation; and (7) Bucer and ethics. Of the twenty-two essays contained in this volume, only eight are translated into English, with three being accessible to an English-speaking readership for the first time and the remaining five bringing together in one volume essays found elsewhere.

The first section consists of three essays touching on Bucer’s use of Augustine, his relationship to the church fathers and scholasticism, and a broader essay offering insight into the relationship between the Reformation and Scholasticism.

The fourth essay of this volume, which is mistakenly listed under first section (cf. p. 7 and p. 439), discusses the relationship between Bucer and Calvin regarding predestination. Van’t Spijker provides four of the five essays in this section, building a case for a relationship of reciprocity and respect between Bucer and Calvin. Here, we find comparison and analysis of their shared view of the Holy Spirit over against that of Luther and Zwingli as well as other significant points of theological and ecclesial continuity between them. De Kroon’s one essay in this section reinforces the findings of Van’t Spijker with his exploration of Bucer and Calvin’s respective views of Romans 13.

If the second section is characterized by agreement, the third is characterized by theological dispute and contention. The first essay here surveys the controversy between Johannes Marbach and Jerome Zanchi regarding predestination, which is a telling controversy as the latter was clearly in continuity with Bucer both theologically and methodologically. Another essay discusses Luther’s infamous rejection of Bucer’s attempts at unity, which again highlights the differences that existed between figures in the Reformation period. In two additional essays, Bucer is seen also as a disputant with the Catholic Reformation theologian Ruard Tapper as well as with Konrad Braun on the relationship between church proper and faith, and the role of laymen in “religious talks” (pp. 250–53).

The fourth section consists of two essays dealing with what amounts to the complex yet thoroughly Reformational (i.e., state as protector of the church) approach of Bucer to the question of the church/state relationship. The fifth section explores Bucer’s relationship to Pietism and what his wills and testaments demonstrate about him as a person. The sixth discusses Bucer’s role in Cologne and details correspondences between Bucer and Gereon Sailers during the Augsburg Reformation. The last section provides a look at Bucer’s approach to ethics, treating such topics as freedom, tolerance, political leadership, and the Lord’s Supper.

This collection of essays gives us a fascinating look at the Strasbourg Reformer Martin Bucer from many different perspectives and angles. What emerges then from these essays is the complexity that characterized both the man himself and the times in which he lived. They ably demonstrate that Bucer should not be relegated to a mere footnote in the life of John Calvin. In fact, the second section helps us to see how indebted to Bucer Calvin truly was and moreover how much Bucer shaped and influenced the broader Reformation movement.

We gain the picture of a man who loved Christ, loved the church, and firmly believed in the Reformation. Yet, Bucer was a man that knew great suffering as well, as seen in the essays on his personal life, his correspondences, and his failed attempts to unite with a Luther-lead Wittenberg.

In sum, the aim of this collection of essays to stimulate “Bucer-research” is largely met. Many of the essays are crafted so as to encourage the reader to explore further areas that are only touched on. Also, the relative brevity of the essays leave room for more development. At the same time, these essays are able to hold the interest of both the beginning student and scholar of Reformation studies. One of the greatest challenges to the overall aim is that just over a third of the essays are translated into English thus reducing the usefulness of this volume for those unable to read the remaining fourteen German essays. But for those able to read German and English, this is a superb and highly recommended volume of essays characterized by clear writing and historical erudition.