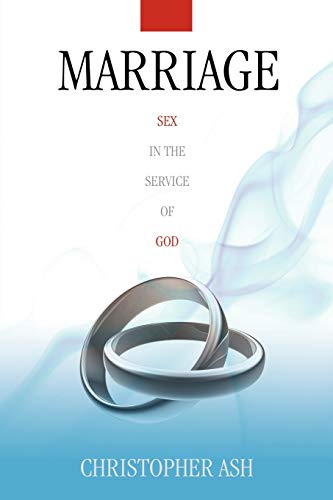 MARRIAGE—SEX IN THE SERVICE OF GOD

Christopher Ash’s thorough and intelligently argued study on marriage will be greatly appreciated by the academically—minded pastor. It is remarkable not just in building a foundational ethic of marriage, but also as an excellent model of how, as an evangelical, to approach ethics in general. Before reaching anything like the central themes of his study, he carefully treats the questions of personal prejudice in ethics, of law and gospel and of OT/NT ethical continuity amongst others. Some readers might be frustrated by the detailed response to ground-clearing questions and the constant defence of method (sections on ‘why the why before the how? and ‘why start with Genesis?’), but there is a lot to learn from Ash on how to go about constructing a Christian ethic, combining solid exegesis with biblical theological insights.

The main argument of the study is that protestant theology (notably following Barth) has reacted against Roman Catholic teaching and consequently placed too much emphasis on the value of sex for the purpose of relationship-building. This has placed undue pressure on the sexual relationship and thereby contributed to relational breakdown. In searching for the biblical purpose for sex, Ash argues that the Genesis concern that it was not good for the man to be alone is to be seen in the context of his God-given task of dominion or of caring for the garden. Thus:

marriage is not in principle God’s remedy for human loneliness … Marriage ought to be considered under the umbrella of the governing ethic of human responsibility (to the Creator) and of the human task (over the creation) (122).

This gives a ‘transcendent purpose’ for coming together, remaining together and raising children, and Ash considers how the traditional ‘goods’ of marriage (procreation, relationship and public order) fit into this overarching goal. In an otherwise persuasive argument, I am not totally convinced when he argues that relational intimacy is to be pursued in order to serve God. I was left wondering why intimacy is necessarily to be pursued under his model. His suggestion that it is only lovers absorbed in each other who can bear fruit in relationship with other (199) did not seem an adequate justification; despite his criticisms of the ‘marriage for relationship’ model, he has to admit that, although service of God may be God’s ultimate purpose, the nature of an intimate relationship is a focus on the other person (love is ‘non-deliberative’). Although there is perhaps more to be teased out here, the main argument is a very significant corrective to what is often taught or implied in our churches. In defining marriage, he also includes thorough treatments of thorny issues such as contraception, incest laws, polygamy in the OT and common law marriages (making some interesting and controversial comments on the latter in particular), and of key texts (notably in his chapter on the pattern for marriage). Comprehensive and fair-handed, his book is one to refer to again and again for summaries of the important arguments on relevant topics and texts.

Although his pastor’s heart is occasionally worn on his sleeve, Ash restricts himself mainly to foundation-laying. This reader, for one, hopes that he will work through more of the implications in future volumes. Already this study challenges how sloppily we often think and speak about marriage and the dangerous implications that can have for marriages we may influence. It is a must-read for all involved in teaching or counselling on marriage and highly recommended for any who are married themselves.