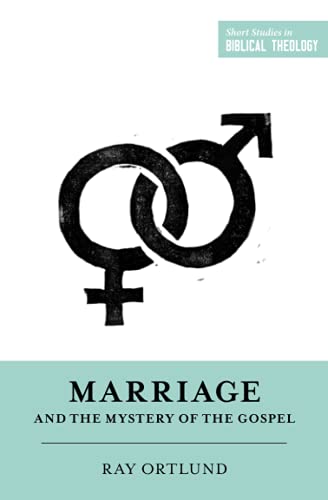 Ray Ortlund, pastor of Immanuel Church in Nashville, contributed this welcomed little volume on marriage to the growing number of texts in the Short Studies in Biblical Theology series published by Crossway. Marriage and the Mystery of the Gospel is a good foundational text on the theology of marriage as taught in Scripture. It is foundational in that Ortlund begins in Genesis, with Adam, Eve, and God. It is important to note “and God” from the previous sentence, for what is enjoyed about biblical marriage comes from God himself. Ortlund states in the preface that he wrote this book with two yearnings: “for a recovery of joyful confidence in marriage” as well as “for more men and women to experience enduring marital romance” (p. 13). This aim is a fresh pastoral perspective this subject deserves.

Ortlund does not interact with other marriage books or therapy studies in any detail as he is keen to present what the whole Bible teaches about marriage. He does this in three chapters that present marriage across the canon. He then presents a final chapter summarizing what is at stake in marriage, offering a final apologetic for sexual ethics and the ultimate reality of the believer’s union with God that biblical marriage represents.

The first three chapters of this study work through the process of God’s revelation as it pertains to marriage in its good state in the garden with Adam and Eve. It quickly moves to the fall of the race through sin and its effects on the relationship between man, woman, and God. Ortlund’s first and most substantial chapter on Genesis sets the backdrop and foundation of his work. He primarily explores the issues in Genesis 2 and 3. While there are many illustrations of marriage gone wrong in Genesis, Ortlund used the relationship between Adam and Eve and the glory of marriage to speak God’s truth into the brokenness of the marriage relationship after the fall. He highlighted the gift of gender and human complementarity in contrast to the desire of the wider culture for all to be functionally the same in marriage and gender. He continued to explore the biblical defense of the definition of marriage from the Bible against the sexual revolution today. In addition, Ortlund encouraged his readers in their struggle for a godly and peaceful marriage saying, “Nothing is more natural in our world today than trying to build a marriage on a foundation of God avoidance. But it cannot work. Without peace with God, we inevitably shatter, the peace we desire with one another” (p. 42).

The second chapter explores marriage in the Law, Wisdom books, and Prophets. In an apologetic tone, Ortlund also reminds readers of all the marriages gone wrong in Genesis and not to take these as examples that God is pleased with: “What the Bible records, it does not always condone” (p. 57). The section on the law gave a keen and penetrating insight to the law of God as it pertains, not just to the letter of the law, but the “humanitarian ethos” behind the law. The main take away from this section is the holiness of marriage, both as ordained by God and its effects on a husband and wife. In the next section, the Wisdom books give much real-life teaching on the marriage relationship. Ortlund views Proverbs and the Song of Songs as primary texts to teach the glories of the marriage relationship as it plays out in daily life. Ortlund draws his readers toward the balanced view of sexual wisdom taught in Proverbs, rejecting the false conservative view “Restraint and control” as well as the progressive view of “freedom, openness and choice” in favor of a “form and freedom” view that allows us to “focus our romantic joy and to unleash our romantic joy” (p. 65). The book’s shortest section covers the Prophets and deals mostly with God’s marriage to his people. This section offers insight into the union God desired to have with his people, as well as Israel’s idolatrous rejection of that relationship with God.

In the third chapter on the New Testament, Ortlund began by pointing out the multiple reaffirmations of the realities of marriage as a one-flesh union God ordained in Genesis 2:24 in the teachings of Jesus in the Gospels. Moreover, Paul reaffirms the Genesis 2:24 reality in connection with the husband and wife relationship, but moved it further, incorporating the “entire drama of the redemption of Christ,” keeping this relationship between man and wife from being just “a merely human cultural construct” (p. 91). Ortlund rightly points out the interaction of both Jesus and Paul with God’s original plan in Genesis for the marriage relationship in contrast to the divorce allowances made for the people in the law of Moses. This chapter on the New Testament is the most clarifying on the husband and wife relationship in a Christian marriage. Ortlund concludes this section connecting the analogy of marriage in the New Testament to the true reality it represents, namely, the union of Christ and his church.

The last chapter served as a final summation of the core aims in this book as a call to the glories of biblical marriage, as well as an apologetic for biblical marriage against the other forms of so called “marriage” in our culture. The strength of this chapter is its connection of the gospel, particularly marriage as a picture of the gospel, to people in contemporary times. Ortlund points out that if the biblical story is true then the truth about marriage cannot be ignored.

This book is essential reading for any Christian to understanding the theological defense of biblical marriage. It makes great strides in few pages. Ortlund keeps to his central aims and defends his position for biblical marriage well. His contrasts with the wider culture show clearly what is at stake for marriage in the world. The pastoral tone of the book allows the reader to feel the care Ortlund has for his readers as he warns of the dangers of departing from God’s view of marriage, desiring for them instead to experience the joy of gospel-centered marital romance.