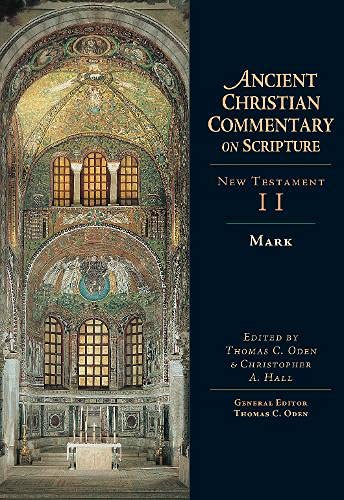 With this volume a distinctive new commentary series is inaugurated. Tom Oden’s passion for ancient Orthodoxy, born of his dramatic conversion from liberal Methodism and coupled with the possibilities of current computer technology, has created this 27 volume project on both Testaments and the apocrypha. All of the extant Greek and Latin Fathers up to ad 750 are mined for their exegetical remarks on Scriptural texts and a representative sampling is printed, pericope-by-pericope, in the fashion of ancient Christian catenae or the Jewish Talmuds.

An introduction to the commentary surveys the ancient evidence for the authorship of Mark (supporting John Mark, the companion of Peter and Paul), provides an apologia for this kind of book (not supplanting but supplementing historical-critical work) and explains the procedure for discovering the sample comments that are printed (not limiting the search to explicit works on Mark since they are quite rare, especially vis-a-visMatthew and John). An appendix elaborates on the latter. In between one encounters a delightful potpourri of ancient commentary. An extremely helpful part of the book’s format is an ‘overview’ section, between each passage of Scripture and the actual quoted remarks, that summarises the main points made in the excerpted selections along with their authors’ names in parentheses.

As one who has authored commentaries on Matthew and 1 Corinthians and felt guilty for not researching more ancient exegeses than the readily accessible works of Chrysostom and Augustine, I found this volume very reassuring. What has been bequeathed to us in the more standard secondary literature of the Greek and Latin fathers is largely representative. I did not find all kinds of new views on texts I had never read before. And, as conservative scholars have been arguing for some time, the Patristic period did not just allegorise narrative. That appears in these selections, to be sure, but so does much sober, responsible observation of the meaning of Mark.

What does dominate is theological reflection, especially about such issues as the union of Christ’s divine and human natures or the nature of the Trinity, even though Mark’s Gospel normally does not seem to have had these topics consciously in mind.

Occasionally, there are some surprises: Palladius on being holy yet drinking wine in moderation (under 2:19) early Christian appropriation of the Phoenix myth (on 4:3), Ephrem the Syrian on a virtually immaterial conception of resurrection bodies (on 5:13), and Tertullian on women having the same sexual respect as men (on 7:26; cf. also on 10:8) and on spouses married for all eternity (on 12:25). It is also unclear what textual basis this series will adopt. The translations of Mark follow the RSV (why not the NRSV?) and include Mark 16:9; 20 without footnote or asterisk (probably because there is significant Patristic comment on these verses), yet elsewhere disregard variants of the Byzantine tradition, even when some of the snippets of comment cited presuppose them.

Overall this is a landmark series that will fascinate scholars and lay-people alike.

Specialists will undoubtedly quibble over the selection of certain writers and remarks rather than others. However, for all of us who have neither the time nor inclination to read the enormous volume of potentially relevant writings from antiquity just for an occasional biblical insight, the Ancient Christian Commentary will be a vast improvement over the ‘hit-or-miss’ citations found in most modern commentaries, and further volumes in the series should be eagerly awaited.