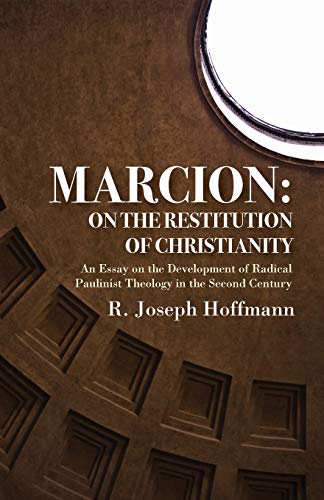 Marcion: On the Restitution of Christianity

This book is a published thesis, which gained its author a PhD at Oxford in 1982. It comes complete with a commendation from Professor Maurice Wiles of that university, who praises the author’s boldness of vision and readiness to check the assertions he makes against the known facts, whilst reserving judgment as to how far his argument will succeed in convincing other scholars of his thesis.

Of the author’s boldness of vision there can be no doubt. He is a conceptual thinker in the mould of Harnack, whose general opinions he follows at many points, though seldom slavishly. He attempts to redate Marcion, putting his death somewhat later (c. 150–154) than the traditional date (c. 144), and claiming that he was actively founding churches by 117 at the latest. The evidence which he offers in support of this hypothesis is necessarily fragmentary and inconclusive, consisting as it does mainly of obscure references to heretical teachers in the writings of Polycarp (d. 156), and to the Latin prologues of the Pauline epistles, which he believes to have been of Marcionite inspiration.

His reconstruction of Marcion’s background and the history of the early church follows the line taken by Walter Bauer, Harnack and others, and must therefore be regarded as highly suspect. He not infrequently acknowledges the existence of material which could provide contrary evidence to his thesis, and sometimes even admits the weakness of his own case, only to go on developing his hypotheses on the assumption that these highly questionable positions are solid fact. The most difficult of these is his assumption that there was a decline of Pauline theology in the late first century, and that Marcion spearheaded an attempt to recover it for the church. This thesis is certainly familiar to readers of Harnack, but students of early Christianity will not swallow it with such ease. In particular, it is impossible to accept that Luke’s gospel (as we have it) and the pastoral epistles were intentionally anti-Marcionite compositions.

The book contains a long discussion of the meaning of apostleship, and claims that Marcion was devoted to Paul to the extent of condemning the twelve apostles as perverters of the gospel. His early dating of Marcion’s activity makes a confrontation between Marcion and John at Ephesus seem highly likely, and one or two rather obscure references are cited in support of this improbable event. Here much depends on dating, and the author unfortunately puts the New Testament books as late as he possibly can, in order to support his contention that Marcion’s ‘heresy’ was a perfectly legitimate development of Christian teaching, at least in its earlier stages.

There is a chapter on the relationship between Marcion and Gnosticism which is broadly sound, though again subject to unproved hypotheses, like the assertion that Apelles was a disciple of Marcion, which forms a major part of his argument. There is then a treatment of Marcionite dualism, ‘Paulinism’ and even Judaism; contrary to popular opinion, Marcion is here presented as being more Jewish in outlook, and more sympathetic to Judaism than any of his major adversaries. He believed that Jesus Christ had come from a God who was superior to the God of Moses, but that did not in itself mean that he rejected the Old Testament as a revelation for Jews. Christ had come to supplant the law by fulfilling it, not by repudiating it completely.

In all this there is much food for thought, though the reader must be warned to keep a sharp eye open for the distinction between fact and hypothesis, which is often blurred in the text. Perhaps the main problem with a book of this kind is that it starts from the wrong end, given the available evidence. It tries to reconstruct the teachings of a man who is known to us only through his opponents, a procedure which is hazardous at the best of times and liable to produce any amount of distortion. It might have been more useful to concentrate on what his opponents said and why. There is a chapter on this at the end, but it is not very satisfactory, relying as it does on the highly improbable assumption that Ephesians and Colossians were post-Pauline anti-Marcionite tracts, and that the unknown letter to the Laodicaeans was in fact written by Marcion!