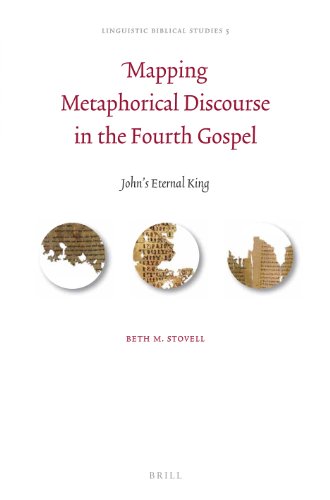 The question of the prominence of the kingdom or kingship of God in John’s Gospel is a pertinent one and not least with regard to the relationship between the Fourth Gospel and the Synoptics as well as to questions relating to the historicity of John. It is almost universally accepted that the reign of God is of key importance to the first three evangelists and that this emphasis reflects the centrality of this theme in the historical ministry of Jesus. But what of John? Can a Gospel in which the common synoptic phrase hē basileia tou theou (the kingdom/reign of God) appears only twice and within the same discourse (John 3:3, 5) be regarded as placing a similar emphasis on the theme of the kingship of God?

The question is tackled admirably by Beth M. Stovell in this study, which is a revision of her doctoral dissertation for McMaster Divinity College. Stovell takes a linguistic approach and analyses the centrality of metaphors relating to the kingship of God in John. She argues that to speak of Christ as king is to discuss the kingdom of God in a very real way (p. 18). She, therefore, aims to show the centrality of the theme of the kingdom of God in John by demonstrating that metaphors relating to Jesus’ kingship can be constantly identified throughout the Fourth Gospel.

In chapter 1, Stovell introduces her study and places it within the context of foregoing scholarship on the question of the kingdom of God in John’s Gospel and notes that there has been a shift in recent years towards a greater recognition of its presence in the Fourth Gospel.

Chapter 2 then discusses Stovell’s methodology for this study by describing the linguistic-literary approach she uses to analyse metaphors of kingship throughout John. She analyses the place of kingship metaphors within the discourse at hand, then considers the internal structure of the metaphor and its relationship to other metaphors culminating with a discussion of the implications of these metaphors.

In Chapter 3 Stovell lays further groundwork for her study by analysing the metaphors associated with kingship in the Hebrew Bible. She shows that Yahweh is described metaphorically as the divine-warrior, the judge and the shepherd-king from whom the human-king derives his authority and whose character the ideal human king should reflect.

In Chapter 4 she examines the metaphorical conception of the Messiah and shows that it is used in close proximity to the title Son of God and to the theme of Jesus’ authority over life arguing that in the ‘blending of these anointing, familial and life metaphors’ Jesus is described as king in a manner similar to Yahweh the Great King (p. 136).

In Chapter 5 Stovell focuses on John 3 and discusses the ‘blending’ that has occurred between the metaphors of kingdom of God and eternal life in the Nicodemus discourse. She argues that ‘the kingdom of God and eternal life function as blended metaphors through the conception of Yahweh the King’s reign as eternal and directly dependent on his own eternal life for its character and for its ability to give life to others’ (p. 199). Stovell then argues again that Jesus is described as king in the manner reminiscent of Yahweh, i.e., the king who possesses and grants life.

In Chapters 7 and 8 Stovell demonstrates how this developing theme of Jesus’ kingship culminates and climaxes in John 12 and John 18–19, chapters which are widely recognised to be replete with kingship metaphors and which are ironically juxtaposed with expectations of the Jewish leaders and Pilate. Chapter 9 then concludes the study.

Stovell’s thesis is an important step forward in demonstrating the centrality of the theme of the reign of God in the Fourth Gospel. She has clearly demonstrated that metaphors of kingship are a prominent part of John and that the Fourth Evangelist is concerned to convey Jesus’ identity as the divine king in a manner that is reminiscent of Yahweh. This is an excellent and well written thesis, but I must respectfully offer the following critical observations of the study. First, Stovell’s methodology can be hard for a non-linguist to get to grips with, and this may deter some readers who would otherwise be interested in the theme of kingship in John. Second, the study reads rather repetitively at times, particularly throughout chapters 4–8. However, this may be understandable given that it is a revised doctoral dissertation. Lastly, Stovell designates as metaphorical certain aspects of the Fourth Gospel that do not seem to be functioning metaphorically within the narrative. This seems most apparent with regard to the theme of eternal life. Jesus’ eternal possession of life and his authority to grant eternal life are indeed the primary ways in which his kingship is conceived of in the Fourth Gospel, and Stovell is correct to emphasise this. Does this mean, however, that the eternal life which Jesus has within himself, or which he grants to his followers, is itself a metaphorical conception?

These criticisms aside, this study gives some fascinating insights into John’s representation of a theme that is so widely recognised in the first three Gospels, and I would recommend this study to anyone wishing to examine the theme of the kingship of God in the Gospels.