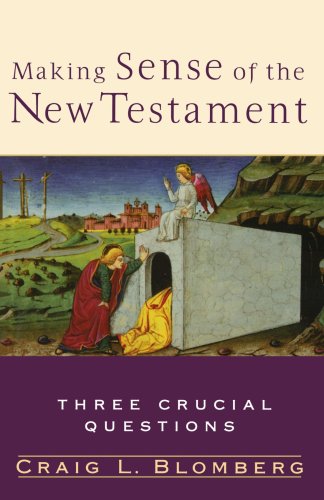 The first crucial question (‘Is the New Testament Historically Reliable?’, 17–70) concerns the historical reliability of the sources regarding Jesus and the early church (‘do the apparently historical portions of the New Testament in fact communicate trustworthy history’, 14). Blomberg sets out with a fine survey of the current state of discussion before he approaches these narratives as a historian would do: ‘But even if we limit ourselves to the approaches taken by the classical historians who stuffy other people, events, and institutions from the ancient Jewish, Greek, and Roman worlds, a cumulative case emerges which suggests that the Gospels and Acts are very historically reliable’ (21). Blomberg’s discussion includes textual criticism, question of authorship and date and the genres of the Gospels and of Acts. Then Blomberg assesses the success of the evangelists’ enterprise by asking whether they had an historical interest, whether they were able to write history and what accuracy is evident in the final product, including discussion of supposed contradictions. Further sections treat hard sayings and missing topics (‘Various early-church controversies described in Acts and the epistles never appear on the pages of the four Gospels’, 45), the evidence of non-Christian writers, archaeological evidence, other early Christian evidence and the miracles. According to Blomberg, by historical criteria alone an impressive case can be argued for the general trustworthiness of the NT narrative books: ‘People who choose to believe more of the accounts than historical reasoning by itself can support do so by a “leap of faith”, to be sure. But it is a leap in the same direction that the vast majority of the historical evidence is already pointing … Because the Gospels and Acts prove reliable in so many places where they can be tested, they should be given the benefit of doubt in those places where they cannot’ (70). Blomberg presents a well-argued persuasive case and raises arguments that cannot be ignored by those disagreeing. The section will be good reading for introductory courses on Jesus and the Gospel.

The second part tackles the question of the relationship between Paul and Jesus. Was Paul the actual founder of Christianity? Can the teaching of Jesus and Paul be reconciled? ‘Or did Paul so distort Jesus’ message that we must choose one over the other?’ (15). After a brief survey of the discussion Blomberg sets out with Paul’s knowledge of Jesus’ teaching and of other elements of the Gospel tradition (reference to the life of Jesus) before providing seven reasons for the remaining silence. Blomberg then makes a number of broader theological comparisons (including justification by faith, the role of the law, and eschatology). Blomberg concludes that Paul ‘Knew a considerable amount about the life and teachings of the historical Jesus, and his central proclamation depended on the veracity of the death and resurrection of Christ, precisely as described in the Gospels and predicted by Jesus himself. Theological distinctives between the two men remain … But in numerous central topics the two find themselves in profound agreement’ (106). This section will make good reading for introductory courses on Paul and on NT theology.

Finally Blomberg raises the question: ‘How do we apply the New Testament today?… more precisely, what varying principles emerge for applying the New Testament’s diverse literary forms?’ (15). Blomberg begins with the plea that valid application cannot be separated from legitimate interpretation. He emphasizes the different approaches to application required by the different literary genres in the NT and the smaller forms that appear within its books. Blomberg discusses general and specific principles for the Gospels, Acts, the epistles of Paul (‘Normative or situation-specific?’, 131) and the remaining NT. A summary of the three chapters notes and indices round off the small volume.

Blomberg has provided a succinct, easy to read but not simplistic introduction to three crucial issues in NT studies from an evangelical perspective. While aimed at and suitable for a wider readership or undergraduate students, the volume also has its challenges for advanced students.