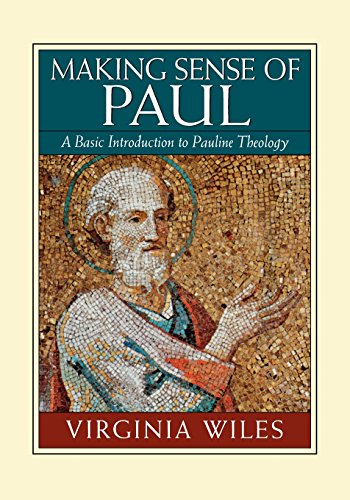 Making Sense of Paul: A Basic Introduction to Pauline Theology

This book has been written primarily for the benefit of that peculiarly North American constituency, college students, and therefore it would be appropriately used in a UK context by beginning theological students and interested lay people. It is very much a student textbook with the now familiar devices of boxes inserted in the text, helpful diagrams and the occasional illustration, reading checks at the end of each chapter, and a brief bibliography (almost entirely North American: Tom Wright scrapes in, but James Dunn doesn’t!). The aim is to communicate to students, whether Christians or not, that Paul has something to say of value for the modern person. The treatment is thus focussed on people trying to make sense of themselves and their experience and is intended to get them to think about themselves in helpful ways and to find in Paul a valuable aid to this process.

Part I deals with Paul’s heritage as a Jew. He was not a convert from Judaism to Christianity, but remained a Jew who gained a new understanding of Judaism. The crucial terms righteousness and law are carefully analysed in a fresh way. Part II, takes up his understanding of sin, slavery and death, areas in which he saw the problems that had been recognised by Greco-Roman philosophers from his Jewish standpoint. Part III considers Paul’s creative contribution to dealing with this problem. Christ was central to Paul’s experience, and fundamentally: ‘Christ means simply this: the revelation of God’s righteousness’. (Always beware of sentences containing ‘simply’ or ‘merely’!) Grace is displayed in the cross, but the author rejects the view that the cross delivers us from a future death because Christ has intervened and died for us; rather we are sinners who have already entered into death, and Christ joins us in this death and dies with us. Just how this participation of Christ in our death saves us is not really made clear; his death seems to show how God is for us, and thus gives us a new perception of God. This leads into a new life in which the Spirit is determinative and delivers us from misperceptions of the law. The Spirit sets us free to be ourselves as God intends us to be. Finally, the author comes to the resurrection of Jesus, and develops the familiar ‘now/not yet’ pattern of eschatology, before concluding with some attention to faith, hope and love.

The structure of this book tends towards that of the typical fairy story in which after much adventure ‘they all lived happily ever after’ but we never hear what ‘living happily ever after’ actually meant. So here it takes 82 pages to work through Paul’s background and the problem of sin, leaving a mere 60 pages to deal with the solution to sin and very little space indeed for the ongoing Christian life. There is some tendency to deal primarily with the human situation and not to focus sufficiently on Christ; the definition of Christ cited above does not do justice to him as a person who mattered supremely to Paul. And to say that the gift of justification comes with no qualification does not do justice to what is said elsewhere in the book about the necessity of faith-commitment.

These and other criticisms apart, the book is characterised by a real effort to involve the readers in rethinking what they may have learnt mistakenly about the nature of religion, Jewish and Christian. This is no detached approach to theology! It does more to show the relevance of the problems that Paul was discussing than some more conventional introductions to his theology. It is, then, an introduction, to get people thinking well, and it will at least get them excited and started on the road.