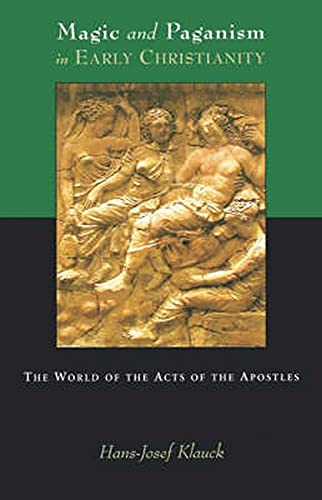 MAGIC AND PAGANISM IN EARLY CHRISTIANITY

This valuable and stimulating short monograph has its origins in a German monograph published in 1996 under the title Magie und Heidentum in der Apostelgeschichte des Lukas or ‘Magic and Paganism in Luke’s Acts of the Apostles’. This title describes the contents of the book rather better than the main English title Magic and Paganism in Early Christianity. The paperback edition announced to appear during 2003 is to be called The World of the Acts of the Apostles: Magic and Paganism—much more descriptive of the contents. This edition is a revision of the German original and not simply a translation; we owe thanks to Brian McNeil for his readable English rendering.

After a very brief introduction Klauck works through Acts chapter by chapter, highlighting and discussing any passage where the earliest Christians meet and engage with those outside Judaism—although he includes Cornelius the godfearer (Acts 10–11) in this category as well as what we might call ‘complete’ pagans and those who practise magic. Klauck begins by examining Acts 1–2 for issues which might be programmatic for the whole book in this area, noting carefully the implication of 1:8 that the Christian mission is to reach to ‘the end of the earth’. In the Pentecost account (Acts 2) Klauck highlights that the crowd consists mostly of diaspora Jews, but controversially and unusually claims that they are permanent residents of Jerusalem.

Klauck is eclectic in his methods, using some historical-critical methods (especially redaction criticism) but also, in other places, narrative criticism. In place after place Klauck illuminates the text by judicious citations from literary and epigraphical sources, and his readers will benefit greatly form his wide knowledge and careful research. In discussing Ephesus, for example, he considers ancient sources concerning the place of Artemis within the city’s religious, political and economic life and more widely (102–105). That said, he writes with a light touch and does not pepper the text with footnotes to the secondary literature (although he helpfully provides primary source references). This feature makes this a book that an undergraduate studying Acts, or the broader issue of Christian engagement with paganism and magic, could read with profit.

A frustration arising from the lightness of touch, however, is when Klauck expresses doubts about the historical value of a point or an episode or offers debatable interpretation (and he does both with frequency) and does not justify or substantiate his claim. For example, he suggests that the story of the Ephesian riot (19:21–40) may not originally have mentioned Paul, but does not explain why. This means there are quite a number of places where I found myself asking, ‘How does he know that?’. Behind this book lie a number of unexpressed assumptions and hypotheses about Acts which it is hard to engage with as a reader precisely because they are never argued explicitly. Klauck is by no means a convinced historical sceptic concerning the events that are narrated in Acts, but nevertheless, those who take a more positive view of the historical tradition behind Acts will find this feature of Klauck’s book disappointing.

In sum, we are in debt to Professor Klauck for his thoughtful and helpful book which illuminates his chosen theme both in Acts and the wider world in which early Christianity began and grew.