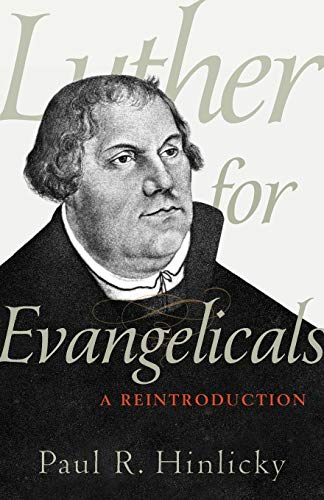 Luther for Evangelicals: A Reintroduction

Lutheran theologian Paul Hinlicky seeks to introduce “English-speaking evangelicals” to the thought of Martin Luther in Luther for Evangelicals. Hinlicky is not hostile to evangelicalism as he understands it but believes it can benefit from an encounter with Luther. He hopes this book will inspire people to read Luther himself and gain firsthand from the great reformer.

To define evangelicalism, Hinlicky draws on The Oxford Handbook of Evangelical Theology edited by Gerald McDermott (Oxford: Oxford University Press, 2010) and Molly Worthen’s Apostles of Reason: The Crisis of Authority in American Evangelicalism (Oxford: Oxford University Press, 2013). Hinlicky believes that evangelicalism is ultimately defined by a shared experience of the new birth. If so, Luther’s understanding of the new birth can provide a way of understanding David Bebbington’s celebrated four traits of evangelicalism: conversion, Scripture, mission, and the cross. Hence, in the first half of the book, Hinlicky expounds Luther through these four lenses in as many chapters.

In chapter 1, Hinlicky contends that the first mark of evangelicalism, conversion, is for Luther the believer’s union with Christ in his death and resurrection. Hinlicky then expounds Luther’s thought on this, covering topics like faith, baptism, imputed righteousness, the Spirit’s work, and various misunderstandings of justification. Chapter 2 turns to Luther’s view of the Bible. Hinlicky believes evangelicalism is experiencing “a crisis of fundamentals” (p. 41), not least because of its adherence to inerrancy. So, Hinlicky focuses on Luther’s idea that the gospel is the key to interpreting all Scripture. Amidst the Bible’s diverse voices and even errors, Christ is the Bible’s fundamental treasure. Chapter 3 covers the topic of evangelization. Hinlicky does this via Luther’s simul justus et peccator, showing how it informs the gospel believers preach (including hope for future full liberation) and the lives Christians live (not perfect but not what we were). Hinlicky then focuses on the atonement in chapter 4, the last mark of evangelicalism. He holds that Luther understood the atonement according to the three motifs of satisfaction, liberation, and imitation. But Hinlicky emphasizes Luther’s “innovative (in the Western tradition) understanding” of the atonement as a mighty “duel” between life and death (p. 87).

In the second half of the book, Hinlicky turns to Luther’s Large Catechism. He notes that many accuse Luther of being an occasional writer whose thought was unsystematic. However, Hinlicky believes Luther’s ideas do have “a theological coherence,” particularly seen in the Large Catechism. So, chapter 5 orients the reader to the genre of catechism, which teaches young believers the fundamentals of Christianity. Hinlicky points out that Luther innovated this tradition by reordering the three elements of the catechism according to his Law-Gospel emphasis: the Ten Commandments, the Apostles’ Creed, and the Lord’s Prayer. Chapter 6 covers Luther’s exposition of the Decalogue, explaining why he excluded its prologue as well as what these commandments now mean for believers in light of Christ’s coming. In chapter 7, Hinlicky explicates Luther’s presentation of the Apostles’ Creed in its three articles concerning Father, Son, and Spirit. It enables believers to begin fulfilling the Decalogue as it presents the one Father-Creator whose figure terrifies, except for the redemption provided by the Son, which is applied by the Spirit to produce “little Christs” who form the church, the mother which “bears every believer by the Word of God” (p. 132). Finally, chapter 8 unpacks Luther’s vision for the Christian life as “new obedience” (p. 135), which is the freedom to love. Hinlicky believes various Lutheran theologians have misconstrued Luther on this point by separating rather than distinguishing Law and Gospel. He avers that if the Spirit brings faith, new life must also be present in the believer. Hinlicky unpacks Luther’s understanding of new obedience in the latter’s exposition of the Lord’s Prayer (a divine command), baptism (objective incorporation in the church), the Lord’s Supper (sustenance), and confession (for pilgrims) in the final section of the Larger Catechism.

Luther for Evangelicals covers much ground and rapidly. Hinlicky mentions thinkers like Plato, Osiander, Hegel, Hobbes, Spinoza, Kant, and Derrida. He touches upon debates, such as that of Oswald Bayer and Christine Helmer’s interpretation of Luther’s hymn, “Dear Christians, One and All Rejoice.” So for what kind of evangelical is Hinlicky writing? Luther for Evangelicals will elude those who lack familiarity with these names because their positions are presented too briskly or not at all.

Hinlicky is to be commended on the idea of Luther for Evangelicals. He is correct in thinking that evangelicals would benefit immensely from an encounter with Luther. However, the book suffers from two problems. Firstly, one struggles at times to recognize the Luther that Hinlicky portrays. One example will suffice. Hinlicky states (without proof) that Luther does not “think of election as having taken place in the eternal past of God’s absolute decree” but rather sees election as “occurring where and when the Spirit pleases, in the giving of the gift of justifying faith” (p. 19). But how does this square with The Bondage of the Will, which is so clearly Augustinian on election?

The second problem concerns Hinlicky’s depiction of an “evangelical.” He ignores the debate that surrounds the meaning and use of this word and assumes the conclusions of Bebbington, Worthen, and McDermott. As an Australian who lives in Singapore and identifies as an evangelical, I barely recognize myself in his depiction of evangelicals. For example, Hinlicky states evangelicals have struggled with a “dictation theory of scriptural authority” akin to the inspiration of the Qu’ran (p. 50). I know of no reputable evangelical who believes this. Perhaps Hinlicky does. But it highlights the problem of how evangelicalism is defined and the particular audience he addresses.

Evangelicals who seek a helpful introduction to Luther’s thought without a knowledge of the philosophers and theologians assumed by Hinlicky would be better served reading Carl Trueman’s Luther on the Christian Life (Wheaton, IL: Crossway, 2015).

Martin Foord is an ordained Anglican minister who lectures in systematic theology at Evangelical Theological College Asia in Singapore.