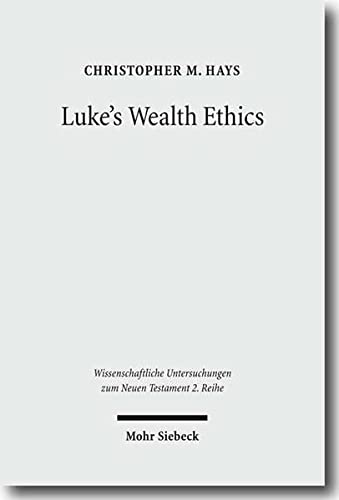 Luke’s Wealth Ethics: A Study in Their Coherence and Character

So much work has already been devoted to Luke’s presentation of money and possessions that one might question the need for yet another run at the material. But according to Hays, the scholarly consensus that Luke’s treatment of this topic is inconsistent and incoherent needs revision. The fact that some passages demand complete divestiture of possessions whereas others allow giving less than all, in tandem with passages where Jesus recommends almsgiving whereas Acts appears to advocate a communal form of distribution has led many to the conclusion that Luke’s treatment of the theme is contradictory. Hays’s entire project seeks to undermine this conclusion by demonstrating that Luke’s ethical teaching on wealth consists of a coherent principle.

Hays argues that there are four strategies for dealing with the apparent contradiction. Two of them he rejects: literary and interim solutions. Literary solutions account for the apparent contradictions by arguing that Luke has uncritically reproduced source material with which he does not agree. That such a literary artist as Luke should have made such egregious errors on a matter of such importance strains credulity for Hays. The interim solution suggests that Jesus’ demands for total divestiture pertain only to the period of Jesus’ ministry. But this solution runs into problems as it fails to account for all of the textual evidence (e.g., Luke 14:33). Hays accepts modified versions of the bi-vocational solution (which sees the inconsistency as arising due to the difference between itinerant and stationary disciples) and the personalist solution (which views a person’s use of possessions as a demonstration of their response to Christ).

According to Hays, Lukan wealth-ethics are built on the coherent principle of renunciation of all, a principle that expresses itself in a variety of contingent forms that depends upon a person’s wealth and vocation. Hays first examines the practices of Jesus and his disciples. Two of Hays’s key texts, upon which he puts a great deal of emphasis, are Jesus’ calling of the disciples in Luke 5:11 and 5:27–29. In both passages, Luke notes that the disciples leave behind “all” or “everything.” Luke is speaking of “all,” however, hyperbolically as Peter, James, and John do not sell their fishing nets and their garments. They simply leave it all behind to follow Jesus. Likewise, though Levi is said to have “left behind all things” he is portrayed as giving a great banquet for Jesus in his very own residence. For Hays, this indicates that renunciation of possessions is not synonymous with complete divestiture. Further, the female followers of Jesus in Luke 8:1–3 are depicted as model disciples as they continually use their possessions to provide for Jesus and the disciples. One of the linchpins for the interim solution is Luke 9:1–6 and 10:1–16, where the disciples are sent out by Jesus as missionaries with the bare minimum of basic provisions. Nevertheless, Hays argues that these poor itinerants are dependent upon the hospitality and provisions of those to whom they preach. Thus, there is again a depiction of discipleship which does not entail total divestiture.

Hays turns next to Jesus’ extended teaching on wealth in the Lukan Travel Narrative (TN). This section forms both the nucleus of the work and is where Hays’s exegesis shines the brightest. In Luke’s TN obedience to Jesus’ demand to renounce all, depending on the wealth and vocation of the disciples, is expressed through a manifold variety of behaviors. The parable of the Good Samaritan demonstrates that Jesus values the Torah’s command to love neighbor (Deut 6:5 and Lev 19:18) over cultic purity. In Luke 11:37–44, Jesus denounces the Pharisees precisely for neglecting love and justice (11:42) and encourages them to make themselves pure through almsgiving (11:41). Hays notes that in Luke 12:33–34 Jesus does not require absolute divestiture, though he does advocate generosity through radical almsgiving. When Jesus demands that all disciples renounce their possessions, Hays again argues that this renunciation is expressed through a fidelity to Jesus that overrides concerns over family, wealth, and one’s own life.

Hays’s interpretation of the difficult parable of the unjust steward (Luke 16:1–13) is nicely argued. As the unjust servant shrewdly used money to find a place of employment after his dismissal, so must disciples use wealth strategically to find friends and eternal dwelling places. By giving alms to the poor, the disciples can expect that these “poor” friends will give them aid in the age to come. Hays’s reading of Luke 16:14–31 demonstrates that seemingly out-of-place references to the Torah and the Prophets nestled within Jesus’ teaching on possessions (e.g., 16:16–18, 29, 31) are included precisely because Jesus sees the Law as demanding care for the poor. Jesus’ warnings against possessions climax with the negative portrait of the rich young ruler in Luke 18:18–30. Hays argues that Jesus’ command to sell “everything you have” (18:22) does not entail entire divestiture but is similar to what is found in 8:1–3 and means something along the lines of “gradually and persistently expending [his] wealth on the care of the other disciples” (p. 173). This is an option open to rich itinerants which the man rejects. In Hays’s attempt to coherently explain Luke’s wealth-ethics, he combines the best of the personalist and bi-vocational approaches. Ultimately, Hays’s approach is closest to the personalist as Luke evidences a variety of appropriate behaviors regarding wealth. Hays’s twist, as we have seen, suggests that these varieties of behaviors all appropriately express Jesus’ demand to renounce all. The contingent expressions depend upon two factors: vocation and wealth.

In the second major movement of the book, Hays examines the Acts of the Apostles to determine whether there is continuity between the wealth-ethics of the Gospel and Acts. Hays argues that in Acts 2:42–47 and 4:32–35 Luke uses both philosophical and utopian friendship language to describe the early church’s periodic divestiture of its possessions and the sharing of possessions and not a love-communism that abolishes private ownership. There is, then, no contradiction between the Gospel’s advocacy of almsgiving and Acts’ depiction of the early church. In fact, given the vocationally non-itinerant nature of the Jerusalem community at this point, they faithfully implement Jesus’ wealth-ethic through the richer members of the church using their possessions to serve the poor. While Luke’s concern with the proper use of wealth and possessions is much more muted in Acts 7–28, Luke never fails to mention both the proper use of possessions by the story’s protagonists (Tabitha, Cornelius, and Paul) and the character flaw of greed by the antagonists (Judas, Simon Magus, and Demetrius).

Hays’s dissertation makes a fine contribution to the ongoing and apparently endless spawn of publications to this Lukan topic. While his two chapters on Jewish and Hellenistic wealth-ethics nicely illuminate his reading of Luke-Acts, he rightly foregrounds Luke’s narrative and its distinct concerns without subsuming it under the weight of the background texts. His exegesis (more so of Luke than Acts) is rigorous and at times particularly illuminating. His treatments of Luke 16:1–31 and 18:18–30 are especially helpful. While Hays impressively argues that all of the behaviors Jesus advocates express renunciation of all, his claim that the precise expression depends upon one’s wealth and/or vocation is a bit more problematic. For example, both the rich young ruler and Zacchaeus are called “rich” (Luke 18:23; 19:2), so they do not differ in terms of their wealth. According to Hays, a rich itinerant such as the fellow from Luke 18 can properly use his possessions by providing the basic needs of fellow itinerants. But that this is what Luke advocates for the rich young ruler is simply speculation. That one can profitably divide disciples into rich itinerants, poor itinerants, rich localized disciples, and poor localized disciples, as a means of determining the proper use of possessions seems to me to be the most controversial component of Hays’s thesis. Nevertheless, despite the more than occasional typographical error (e.g., pp. 3, 16, 18, 30, 73, 87, 92), Hays’s dissertation is thoroughly researched, contains a wealth of solid exegesis, valiantly attempts to give a coherent logic to Lukan ethics, and will certainly be one of the three or four works I turn to when engaging Luke’s teaching on wealth.