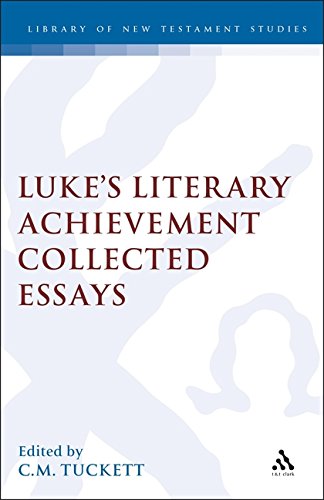 Luke’s Literary Achievement is a collection of essays which were given at a colloquium held in 1994 at the University of Manchester as part of a link established between that institution’s Department of Religions and Theology and the Faculté de Théologie of the Université de Lausanne, Switzerland. The essays in this volume are concerned largely with issues related to Acts, with only the editor’s essay concentrating solely on the Gospel.

As with any conference, the papers in this volume are varied in both quality and direction. They are not, as the title suggests, largely concerned with literary interpretation, although D. Marguerat’s paper on the three accounts of Saul’s conversion in Acts 9, 22 and 26 is a very helpful example of the formalist/narrative-critical branch of literary criticism. Other essays that merit attention are M. De Boer’s on the term ‘god-fearers’ in Acts, G. Brooke’s comparing the world-views from which the Qumran document 4QMMT and Acts were written, R. Tomes’s on the issue of the two incidences of seemingly Nazarite hair-cutting in Acts, and C. Tuckett’s on the Lukan Son of Man.

Reading this volume was a very enjoyable journey through much classical ground in Luke-Acts studies, and contained some interesting forays into fairly new territory, such as the issue of the Dead Sea Scrolls and their relationship to Acts. There are some essays in this volume which will undoubtedly become standard references in further discussion of their various topics, and others which are very helpful summaries of their particular issues for both the biblical student and researcher. It could also be a very useful volume for a seminar class on Acts (with apologies to C. Tuckett, whose lone Lukan essay leaves it somewhat in the minority), and is undoubtedly one which will prove of lasting value.

There are, however, two annoying characteristics of this volume which are perhaps inevitable in a project such as this: (1) in the half of the volume that has been produced by the continental scholars, the essays often contain few references to sources in English (although this is not always true, as in D. Marguerat’s case), which may limit their value for those who do not have facility is French and German; (2) two of the essays seem to have suffered somewhat in the translation process (A. Rakotoharintsifa’s paper and that by T. Römer and D. Macchi). These two annoyances aside, however, this is a volume whose positive factors far outweigh its negative ones.