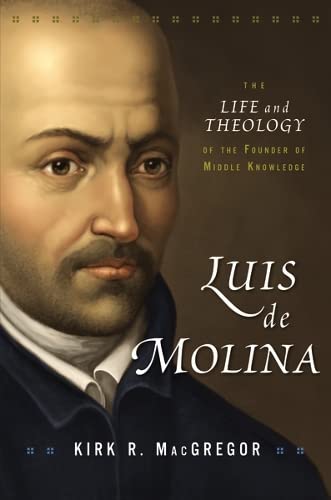 Luis de Molina: The Life and Theology of the Founder of Middle Knowledge

Luis de Molina: The Life and Theology of the Founder of Middle Knowledge is driven towards the following theses: (1) Molina’s story proves just as captivating, edifying, and inspiring as the stories of Luther and Calvin (p. 15); (2) Molina was an original thinker whose theological system is not identical to Calvin’s system or Arminius’s system (p. 19); and (3) Molina was a brilliant practitioner and theologian whose innovate thought continue to provide answers to questions posed by evangelicals in modernity (p. 29). For the purposes of this review, I will focus on the first two of these.

Regarding the first previously mentioned purpose, MacGregor uses Molina’s life events as the background to articulate Molina’s philosophy, theology, and social justice views. Thus, each chapter contains a suitable amount of biographical remarks before expressing Molina’s thought on the relevant matter. It isn’t until one reaches the end of the book where a robust view of Molina’s life emerges. The following is a summary of MacGregor’s biographical account of Molina: Molina had an evangelical and Luther-like conversion experience (pp. 36–38), he was a key player in trying to solve the ecumenical tensions that were brought about by the Reformation (p. 61), he was targeted by the Inquisition (p. 172), he was almost anathematized (p. 228), and that he faithfully stuck to his position and was ultimately vindicated (p. 241). Much more could be said, but ultimately, even from this brief sketch, Molina’s life seems as edifying and inspiring as the lives of Luther and Calvin.

In order to address the book’s second thesis, it would be helpful to first articulate Molina’s theory of middle knowledge. Molina believed that between God’s natural knowledge (knowledge of necessary truths) and free knowledge (knowledge of what could happen in all circumstances), was God’s knowledge of what individuals would do in every circumstance (p. 92). Accordingly, God chooses to actualize a world where individuals would freely act in accordance with His desires, at least as far as feasibility permits.

What grounds the truth of the proposition that S would do action A in circumstance C? God possesses supercomprehension which allows Him to have, “unlimited intellectual capacity to perceive infinitely, within his own mind, the individual essence (or pattern) for every possible thing he could create,” which includes, “knowing what each essence, if instantiated, would do … in any possible set of circumstances in which it existed” (pp. 100–1). MacGregor points out that this system is different than Calvin’s system, as individuals here have genuine freedom to respond to God’s grace. Molina also differs from Arminius’s system in holding that God not only possesses middle knowledge, but that middle knowledge is logically prior to any decision made by God (p. 20). This being so, it is hard to argue that Molina’s system isn’t unique in its own right.

Due to the present scarcity of English translated material from Molina, there isn’t anything in print that even resembles MacGregor’s ground-breaking work on the life of Molina. For this reason alone, MacGregor’s work deserves attention. And as articulated above, I think MacGregor has clearly been successful in arguing for his theses. It is therefore, no question that MacGregor’s work should be seen as successfully contributing to the literature on Molina and his thought.

Nevertheless, MacGregor’s work isn’t without its own problems. First, MacGregor paints a picture of Molina as a theologian who is offering a middle way between the Reformation and Trent, not only philosophically but also theologically. It is here that MacGregor could have been more thorough in investigating coherency problems with Molina’s thought and Roman Catholic teaching. For example, MacGregor argues that Molina embraced justification as a once-for-all transformative event (p. 69) that happens when a sinner responds to God’s prevenient grace by personally surrendering to God (p. 67). MacGregor isn’t at all clear how this relates to the Roman Catholic position that baptism is the normative means of tying the sinner to Jesus and thus initially justifying the sinner before God. Moreover, even granting that Molina’s view of justification is consistent with Roman Catholic teaching, questions still remain. For instance, would a Molinistic understanding of the perseverance of the saints seem plausible given that Molina’s doctrine implies that all of those who are baptized will forever be right with God? Having said all of this, it seems that MacGregor’s evangelical interpretation of Molina might come at the cost of Molina’s Roman Catholic identity.

Second, there seems to be some real tension in either Molina’s thought or MacGregor’s interpretation of Molina as it relates to God’s nature and knowledge. According to MacGregor, Molina rejected that God is actus purus (pure actuality) as with middle knowledge. Here, God would be seen as passive in respect to human actions and it would thus, be human actions that would be acting upon God insofar as effecting his divine decree (pp. 161–63). This reason for rejecting God as pure actuality is a little puzzling as this seems completely at odds with MacGregor’s statement that “God does not get His knowledge from things but knows all things in Himself and from Himself” (p. 22, emphasis original). For Molina, God’s middle knowledge is logically prior to His election and of course the elect’s actions. This means that there is no obvious way in which individuals effect or cause anything in God (see Thomas P. Flint, Divine Providence: The Molinist Account [Ithaca, NY: Cornell University Press, 1998], 85); and this being the case, there would be no reason to reject God as pure actuality. While I’m uncertain if the tension belongs to Molina or MacGregor’s interpretation, overall this book is very clear and consistent in thought. Regardless of one’s soteriological persuasion, this book deserves to be on the shelf of all students interested in the Reformation, the Free Will and Divine Foreknowledge Problem, and the Problem of Predestination.