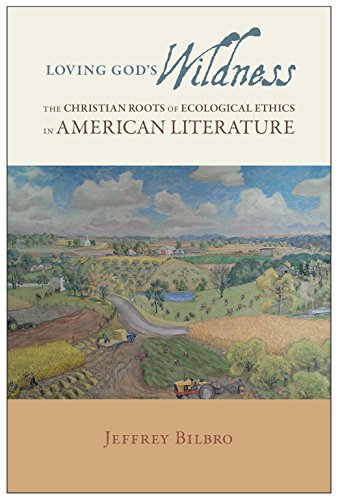 In his recent book, Jeffrey Bilbro looks beyond typical theological sources to evaluate how literature written from a background of Christian ideas has impacted environmentalism. By bringing his expertise as an assistant professor of English at Spring Arbor University to bear through literary analysis, Bilbro adds a new perspective to the discussion of Christian influences on environmental ethics.

The volume is divided into five chapters with a conclusion following. In the first chapter, Bilbro introduces some of the history of environmentalism in America within the Christian tradition. He begins with the Puritan colonists and moves through to the early nineteenth century. Chapter 2 offers an in-depth analysis of Henry David Thoreau. Bilbro outlines the way Thoreau adapted the religious language of his era and the Puritan interest in the created order to develop an ecological ethics. In this chapter, Bilbro reaches beyond Walden into other books and articles Thoreau wrote, which expands and enriches the rather limited analysis typically done on Thoreau’s environmentalism. Muir’s modifications of the Disciples of Christ theology are the topic of the third chapter. Bilbro notes that Muir never formally renounced the faith of his youth, but he is insufficiently critical of Muir’s departures from orthodoxy. Instead of either anthropocentrism or biocentrism, Bilbro argues that Muir developed a theocentric environmental ethics (p. 73). Despite this argument, Bilbro portrays Muir as finding the summum bonum in wilderness, seeking “wild salvation,” and rejecting “organized religion” in favor of a “glacier gospel” (p. 83). Bilbro portrays Muir as post-Christian though he never states that explicitly.

Chapter 4 offers a literary analysis of the Roman Catholic Willa Cather, the author of O Pioneers! and My Ántonia. Bilbro’s analysis of Cather shows the interest in a sense of place, balance, and community within Cather’s work that offers a base for an ecological ethic. The heroes of Cather’s novels, follow the example of Mary when they “obediently submit to God’s redemptive plan” and of Jesus when “they attentively watch and pray for God to restore all the members of his household” (p. 22). In this, Bilbro sees Cather rejecting the alleged dualism of the Puritans. The fifth chapter is an analysis of Wendell Berry’s ecological ethic as it is presented in Jayber Crow. Bilbro effectively shows how the novel Jayber Crow reveals Berry’s notions of the limits of human work and celebration of rural living. Berry’s sense of place and emphasis on maintaining the balance of the farmer’s efforts with the welfare of the land is well portrayed. This chapter, however, does not seem to fit with the methodology of the others as it focuses on only one novel and goes well beyond Berry’s environmentalism into his notion of marriage, love, and economics.

In the conclusion, Bilbro very briefly ties the four authors together and points toward “the way that America’s Christian tradition can continue to draw creatively on its theological resources to respond to changing cultural conditions” (p. 182). Based on his analysis, however, it is not clear that what results from that creativity will be authentically Christian.

The chief weakness of this volume is that Bilbro does not always accurately represent theological streams discussed in the book. The Puritans are a frequent victim of this inaccuracy, with Bilbro accusing them of Cartesian or Gnostic dualism, treating those forms of dualism as if they are identical (e.g., p. 5). Bilbro’s representation of the Puritans resonates with Max Weber’s interpretation of their theology, but has less to do with what the Puritans themselves wrote (p. 183n1). Additionally, the author presents the figures in the volume, particularly Thoreau and Muir, as if they were faithful Christians or had merely updated historic statements of doctrines in a manner consistent with Christian orthodoxy. Yet it is doubtful either would have claimed to be Christian. Neither Muir nor Thoreau were orthodox Christians as represented through their writing, though they both were sufficiently familiar with orthodoxy to communicate in terms that resonate with faithful Christians. The roots of ecological ethics in American literature may well be traced to the Christian tradition, but some of the figures presented in this text seem to represent a Christian orthodoxy with which they themselves had only minimal personal acquaintance.

Despite the weakness in the theological interpretation, the literary analysis is very well done. Bilbro should be commended for his work in examining the major texts of Thoreau, Muir, Cather and Berry to trace how Christian themes inspire their environmentalism. Bilbro’s analysis gives hope that a God-honoring version of environmentalism can arise within orthodox Christianity itself. Additionally, Loving God’s Wilderness does something new in the discussion of Christian environmental ethics. This is a book that deserves attention because Bilbro’s work advances the research on the topic and makes a compelling case for the relationship between Christianity and American environmentalism.