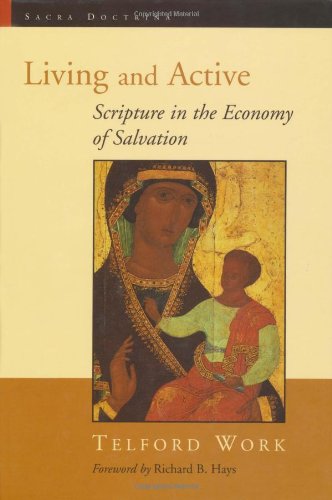 LIVING AND ACTIVE: SCRIPTURE IN THE ECONOMY OF SALVATION

Telford Work has produced a rich and stimulating book on the place of Scripture in theology and the church. For a long time debates about the Bible, particularly in North America (where Work is based), have centred around certain concepts (inspiration, infallibility, inerrancy), and some have concluded from this that a doctrine of Scripture is an unhelpful focus of interest. Work wants to establish a much broader and more profound approach to Scripture. In three main sections, he develops, first, what he calls a ‘bibliology’, i.e. a trinitarian ontology of Scripture—a description of what the Bible is in relation to who God is Father, Son and Spirit. Referring to two ancient theological greats (Athanasius and Augustine), plus two moderns (Barth and von Balthasar), Work argues that bibliology should be related both to Christology (to ensure the supremacy of Christ), and to pneumatology (to avoid exalting Christ’s words in Scripture over the rest of Scripture). The second main section offers ‘a soteriology of Scripture’, i.e. a description of the fact that God uses Scripture as a means of his saving presence and grace in a fallen world (19). Here Work gives us a chronological survey of how Scripture itself witnesses to the role of God’s words, both oral and written, in the history of his dealings with his people through both Testaments. He succeeds admirably in making his point that it was fundamental to the salvation of ancient Israel and of Christians now that God speaks through human words (thus, on the Ark of the Covenant. ‘It is in the Ark of God and in the words said to reside there that Israel sees God savingly present’, p. 142.) The third and final section builds on the earlier ontology and soteriology, and gives us an ‘ecclesiology’ of Scripture, i.e. an account of Scripture as a means of God’s saving presence in the church, and as ‘an instrument of the worshiping community’ (216). Work’s conclusion here is that ‘the Bible is an agent in the divine economy of salvation’ (313).

Work sometimes writes with a theological and rhetorical flourish that obscures rather than illumines the details of his own opinions, and undergraduates may find this hard going at points. He also refers to a ‘twofold inspiration’ of Scripture, including an on-going ‘inspiration’ of Scripture by the Church (262). He explains what he means, but the use of that quite specific term for the on-going relationship of Scripture and Church does not help clarify his point.

Yet these are fairly minor quibbles about the book’s precise destination, and are small in comparison to its massive strengths, which are to be found in its starting-point and overall direction. Work demonstrates powerfully that, whether theology is viewed historically via its greatest minds, biblically through the history that Scripture recounts, or systematically through its key doctrines, a doctrine of Scripture that looks preity much like the orthodox Protestant one is simply demanded everywhere. Anyone who has been given the impression that a fully worked-through doctrine of Scripture as ‘the Word of God’ is only an unfortunate and recent evangelical blind-alley in theology will be shown here how historically, biblically and systematically misinformed that view is. There is not much recent high-level writing around that makes this vital point, and Work’s book is a sophisticated filler of the gap. His criticisms of B. B. Warfield’s approach to the evangelical doctrine of Scripture should provoke further creative evangelical thinking. Work’s own doctrine of Scripture seems broadly similar to that developed from a more hermeneutical angle by Kevin Vanhoozer and others, and a good knowledge of the work of both would give an excellent understanding of Scripture’s nature and role.