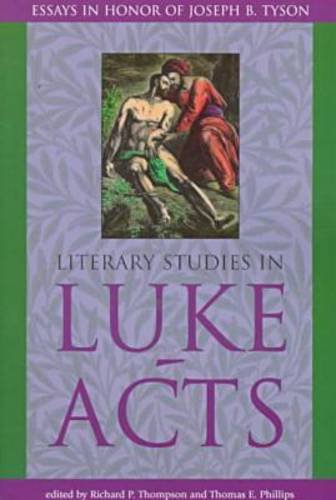 Literary Studies in Luke-Acts. Essays in Honor of Joseph B. Tyson

Joseph B. Tyson of Southern Methodist University, Dallas, Texas, has made his scholarly reputation mainly in the areas of Lucan studies, the Synoptic Problem and the relation of Christianity to Judaism. This volume by twenty colleagues and former students is concerned to develop these issues further. The authors who are most likely to be known within the constituency of this journal are Darrell Bock, who argues from Qumran evidence that a charge of sedition could be understood as one of blasphemy in the case of Jesus, and David Moessner who offers a close study of the use of the Psalms cited In Peter’s Pentecost sermon.

The veteran opponent of the ‘Two-Document Hypothesis’ and defender of the ‘Two-Gospel Hypothesis’, William Farmer gives a critical survey of recent writing in this area, concluding with the promise of a book showing how Mark has used Matthew and Luke as his sources. William Walker continues his case that the author of Acts knew, and tried to correct the impressions that readers might get from the Pauline epistles (here Galatians).

Several of the essays develop literary approaches to Luke-Acts. John Darr argues that the picture of Gamaliel is ironic rather than presenting him as eirenic. Charles Talbert offers a helpful survey of how ancient auditors would have recognised the phenomenon of conversion in Acts. Philip Shuler discovers some Hellenistic rhetorical motifs in the way that Luke narrates the birth stories, placing John and Jesus alongside each other and comparing them. Robert Tannehill argues for a reading of Scripture in the light of the dual command to love God and our neighbour, so that human benefit flows from the reading; this may involve us in saying ‘no’ to some passages of Scripture.

While Robert Brawley argues for a positive understanding of God’s promises to the Jews in Luke-Acts, Jack Sanders defends his view that there is anti-Semitism in Luke-Acts against Helmut Merkel and Craig Evans. Thomas Phillips shows how Luke uses the two ‘What shall I do to inherit eternal life?’ stories to indicate subtly that nothing can be ‘done’ to achieve it (other than repentance and faith in Jesus Christ).

Finally, in this selective survey, one article is quite different from all the others. Susannah Heschel uses archives to tell the little-known story of Christian scholars supporting and encouraging anti-Judaism in Nazi Germany. It is a harrowing tale and makes one ask whether Christians today would have the strength of their convictions to resist the awful pressures of a totalitarian state.

This rapid survey indicates that this is a volume of very mixed character with contributions of varying worth from different points of view. It is a volume that libraries will want to have, not only as a tribute to a highly respected scholar and teacher but also for its contribution to the ongoing debate on NT interpretation.