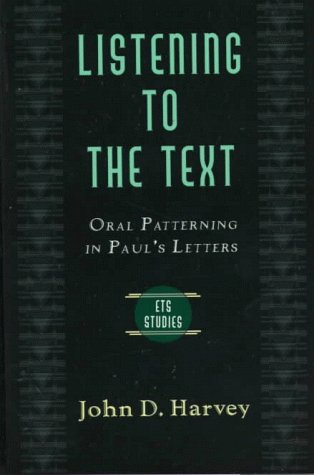 This is a useful reference book on the patterns of words and ideas in the seven ‘undisputed’ letters of Paul. Harvey’s interest is in patterns that would guide hearers of the letters through the points that were being made. As he points out, normal considerations of letter structure only really give much help for the beginnings and endings. In Paul’s letters there is usually a great deal of middle. Harvey demonstrates that there are many ‘oral patterns’ that help the hearer keep track of what is going on.

Both the strength and the weakness of the book is that it covers seven letters and covers all the examples of patterns that Harvey can see as well as many that other scholars see but which Harvey questions. The compendious nature of the resulting volume is made worse by the inclusion of a history of scholarship at the beginning. After this and a chapter on oral culture and literary culture, then two chapters on Graeco-Roman and OT examples, then one defining his method, Harvey has to rush through his dozens of patterns in Paul’s letters. He often gives only a few lines to patterns whose discussion would have merited several pages.

Having said that, all the material is very clearly set out and helpfully arranged. One does need to read Greek to understand Harvey’s arguments but if one does, one is shown clearly the ABAs, the word-chains and the instances of chiasmus, inversion, alternation, inclusion, ring-composition, refrain and concentric symmetry!

Harvey’s list of types of pattern seems over-long and the distinctions between them over-subtle. This is suggested particularly by some of the cases in which a passage could fit more than one type. However, all the patterns are interesting and worth looking at, irrespective of how accurately we can classify them. The crunch is: how useful are the patterns for exegesis? They can be very significant. Harvey reads 1 Corinthians 5–6 as an ABA pattern centred on 6:1–11, the passage on law-courts. He infers that the ‘judging’ topic there is central to understanding each of the flanking passages about sexual immorality. Less directly, he argues that similarities between 2 Corinthians 2:12–13 and 7:5–6 suggest that these form a ‘ring-composition’. This means interpreting 2:14–7:4 as part of the same original letter as the surrounding passages, contrary to theories advanced by some scholars.

Both of these are interesting suggestions and many more could be drawn from patterns observed by Harvey. However, one is generally left to do all the exegesis for oneself. Of 357 pages, only eight focus on exegesis. This is not a good balance! Hopefully, Harvey will follow his book up with some more exegetical articles.

Harvey has provided observational raw material for a wealth of further study. His book gathers in one place a range of material that would otherwise be hard to access, compare and consider. Of course, he also engaged in claiming territory on behalf of oral studies of Paul. Most of the types of pattern that he looks at are ones already recognised by scholars: but they are usually viewed as literary patterns rather than oral ones. In principle, Harvey is probably right. In practice, since the models that literary critics draw on are ones such as Homer, which Harvey cites as oral poetry, the disciplines of literary and oral criticism of ancient texts are going to be very difficult to prize apart.

Northern College and University of Manchester