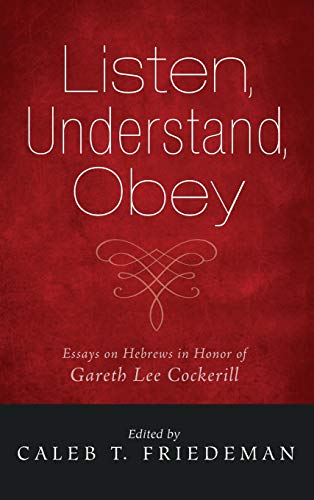 How does one review a Festschrift? This book is a fitting compliment to Gary Cockerill, recently retired professor of New Testament at Wesley Biblical Seminary, insofar as it displays his own values: breadth of interest (the book has contributions from historians, exegetes, and systematicians) and pastoral heart (every essay is ultimately aimed at the church, despite varying degrees of technical interest along the way).

I focus here on a couple of the book’s essays that are more significant, in my opinion. First, Jon Laansma reflects on Hebrews’s emphasis on divine speech, and particularly God’s speech in relation to his promises to Abraham, en route to a fascinating exploration of theological hermeneutics. Laansma parallels the possible backdrop to Hebrews (some denying that the new has come and affirming the ultimacy of the old) with those who want to ignore the coming of the Son in order to grasp the OT only in its “original context”—“to insist on [that] attempt might be tantamount to turning back to the shadows, against which this entire epistle warns, rather than holding fast to one’s confession” (p. 67). In describing Hebrews’s own hermeneutic, he says that since that hermeneutic “is not in fact a product of human genius, no amount of [historical] exegesis will be able finally to retrace the exegetical path that led to [it]” (p. 65). But having constructed a theological rather than a merely historical account of Hebrews’s interpretive methods, should we go and do likewise? “Not to do what [the NT writers] did hermeneutically would finally be disobedience to the gospel itself, to deny that it is the God who is the Father of the Son, who is known only in the Son, who speaks in these [OT] Scriptural texts” (p. 66). Much food for thought here!

Amy Peeler takes up the question of human priesthood in light of the surpassing priesthood of Christ in Hebrews. “If Jesus is truly our high priest, should anyone else play the role of priest on earth?” This becomes two questions: (1) “What should human priesthood look like in light of Jesus’ sole, sufficient, and eternal priestly ministry?” and (2) “If all are priests then what is the biblical justification for the ordination of some?” With respect to the first question, Peeler surveys priestly language—applied to believers—in the NT and argues that it stems from their filial relationship to the Father. “Sacramental ministry,” she suggests, is no less birthright-based than it was in Israel; the difference is that now the whole community are sons and daughters and therefore priests (p. 105). On the second topic, Peeler goes back through the NT and asks whether it offers any justification for “priests among priests” (p. 110)—an ordained sacramental set of believers as a subset within the priesthood of all. She answers in the affirmative, but hesitantly—all serve and worship as priests, and that is the dominant emphasis of the Scriptures, but some have a specific priestly role (preaching, sacraments, pastoral care) toward other priests.

Tom McCall engages a vital theological issue in Hebrews—the submission and obedience of Christ to the Father—in conversation with Thomas Aquinas and Karl Barth. Surprisingly, he says, Hebrews 5:8 (Jesus “learned obedience from the things that he suffered”) has not featured prominently in conversations about Christ’s submission—but it ought to! Barth, says McCall, argued for an eternal (ontological) subordination of the Son: the Son as eternal Son is subordinated; there is a hierarchy in the Trinity (pp. 136–37). Aquinas, on the other hand, argued for the Son’s “missional obedience”—“it is the incarnate Son who is subordinate” because he “has the form of a servant” (137–38). Against Barth, McCall argues that Jesus’s obedience is presented as a surprise in light of his sonship (Heb 5:8), and so it is unlikely that his sonship is (eternally) constituted by his obedience (p. 145). Digging deeper into Aquinas, McCall notes the disconnect between Aquinas’s claim that the incarnate Son possessed the beatific vision throughout his earthly life and those who see in the cry of dereliction a separation of Father and Son. McCall, as those familiar with his marvelous book Forsaken (Downers Grove, IL: IVP Academic, 2012) will know, sides with Aquinas. “It is because [Jesus] is the one who is both human and divine—and thus the one who enjoys … unbroken loving communion shared with the Father (the beatific vision)—that he is able to fully sympathize with us in our weaknesses while also uniting us to God” (p. 149).

Chris Bounds presents a survey of early (1800–1840) Methodist readings of Hebrews; it does not offer a single thesis, as many of the essays in this collection do, but as one unschooled in Wesleyan theology and commentary I found it extraordinarily informative. The dominant themes will not be surprising: the person of Jesus, the Wesleyan “synergistic understanding of salvation” (p. 162), the possibility of apostasy, and the pursuit of Christian perfection. Among the more interesting points were the following: (1) affirmation of Pauline authorship of Hebrews, (2) rejection of the doctrine of eternal generation of the Son, (3) insistence that apostasy is willful rejection and not mere backsliding (I’m reminded of the unfortunate joke about the Arminian daisy to counter the Calvinist TULIP: “he loves me, he loves me not …”), and (4) Wesley’s own suggestion that God raised up the Methodist church for the chief end of “propagating” the doctrine of perfection (p. 166).

This is a fine collection of essays and a fitting tribute to Gary Cockerill, a man whom all of us who study Hebrews count as a mentor and model of faithfulness to God and His Word.