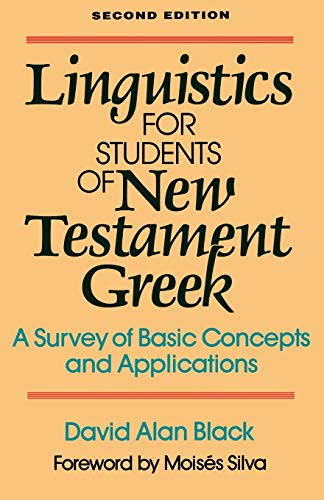 Every student knows the frustration of encountering technical terms which must laboriously be looked up in some obscure dictionary or encylopedia. Linguistics, increasingly finding its way into biblical studies, has its own quite enormous specialist terminology, and this book explains and illustrates most of it. There is a useful index to ensure that the reader can readily locate tagmemes, morphemes, paranomasia, metonymy and so on. The book is carefully organized, with an explanation of what linguistics is, and then chapters on phonology, morphology, syntax and semantics, the sounds of Greek, word formation, the grammar of strings of words, and the study of meaning. The book is very carefully written, and well laid out.

So the first thing to be said is that most students will profit from owning and using Linguistics for Students of New Testament Greek. It’s the kind of book you can dip into at any time, read a bit, and learn something from. Or the kind of book to have ready on the desk when reading a serious commentary. And when the word hendiadys turns up you’ll know where to turn to find out what it means.

But the second thing is that the book could unintentionally give the reader the wrong idea about meaning. Actually chapter five, which is all about semantics, meaning, is good: clearly Black does understand what James Barr and others have been saying about the source of meaning. But in earlier chapters of the book some odd things appear on meaning. On p. 72 we are told that the root ag means to lead or to drive, and that agros is to be understood as ‘field (where cattle are led)’. And on the same page the root ba means to go, and probaton means ‘sheep (that which goes forward)’. And still on p. 72 we have an explanation of diabolos from bal meaning to throw: the devil is ‘one who throws words at’.

The illustration from Hockett on p. 79 is similarly unfortunate. A Greek word is compared to a locomotive (the word stem) which picks up inflectional morphemes like so many boxcars, ‘each carrying a particular load of meaning’. This model is then used to suggest that morphological analysis ‘enables the reader to obtain the significance of each morpheme and thus to understand the total significance of the verb form’. But meaning is not determined in this way. As the author almost certainly knows, past tenses do not always signify the past, imperative forms are not always commands, interrogative particles do not always signal questions, and meaning is to be found not in the word, still less in the morpheme, but in the context within which language is being used.

I think that a second edition of this work will be called for. And then the chapter on morphology can be brought up to date.