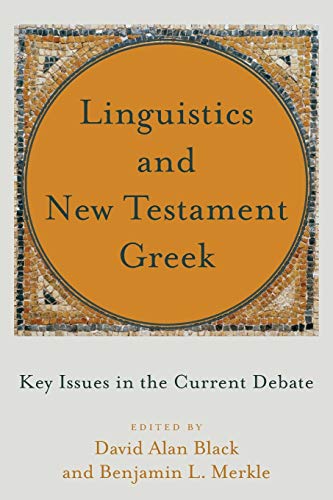 Linguistics and New Testament Greek is a collection of eleven papers presented at a conference of the same name in April 2019 at Southeastern Baptist Theological Seminary. In addition to these papers, the book’s editors, David Black and Benjamin Merkle, provide a preface and postscript respectively. Many of the chapters are clear, helpful, and thought-provoking. However, while many “key issues” are discussed, one may wonder whether every chapter meets this criterion and whether every chapter meets the stated goal of the book: “to try to help our Greek students become more familiar with the significant contributions that linguistics can make to their study of New Testament Greek” (p. 2).

Black’s preface (“Where Did We Come from?”) successfully defends the need for this book. He notes that only very recently have we recovered a “temporarily mislaid interest in the science of linguistics” (p. 2) and then argues for the value and necessity of linguistics to the study of Greek. As his final remarks make clear, New Testament scholars and students can no longer afford to be ignorant of the field.

In the first chapter, Stanley Porter provides a history, summary, and analysis of the major linguistic schools that have underpinned and do underpin how we understand and analyze Greek (even if we are not aware of it). This chapter is a needed encouragement that those studying Greek ought to come to greater understandings of these schools. However, it is not clear how this chapter helps the typical student. The practical implications of subscribing to this or that school are not drawn out well. Moreover, there is an underlying theme throughout the chapter that pits Porter and his school of thought, Systemic Functional Linguistics, against everyone else. This results in one-sided critiques of other positions and an uncritically positive assessment of the place and value of SFL.

Constantine Campbell’s chapter, “Aspect and Tense in New Testament Greek,” details what is meant by these terms, summarizes the history of the debates surrounding the Greek verbal system, and considers the relevance linguistic insights into the Greek verbal system have for exegesis. Overall, this is a helpful chapter that is clearly written. However, given the nature of the debated topics and Campbell’s own investment in them (in particularly his idiosyncratic perspectives on semantics/pragmatics and tense/remoteness), the lack of an additional voice is a missed opportunity. Campbell’s section on “Relevance for Exegesis” is excellent, and I only regret that it was not longer, with more examples for students.

Michael Aubrey’s chapter on the Perfect tense-form is exceptional. It provides a clear, linguistically based description of the perfect tense-form, successfully arguing that in order to understand it we must consider aspect, event structure, and transitivity. It is a dense chapter, but the plethora of examples and visuals demonstrate Aubrey’s claims well. Aubrey’s work is cutting-edge and will benefit scholars and students alike. (It has already made its way into my Greek lectures!)

In chapter 4, Jonathan Pennington discusses the history of the debate surrounding the middle voice and demonstrates how a linguistically informed understanding of middle voice helps us to read Greek well and benefits our exegesis. More interaction with Rachel Aubrey’s work would have benefitted the paper—generally but also specifically. For example, Pennington claims that the θη suffix was “the more familiar productive form for producing aorist passive endings” and that it “was encroaching into the aorist middle space” (p. 91), ignoring that θη was originally a marker of state predicates that became a marker of perfective aspect and middle-passive semantics (see Rachel Aubrey, “Motivated Categories, Middle Voice, and Passive Morphology,” in The Greek Verb Revisited: A Fresh Approach for Biblical Exegesis, ed. Steven E. Runge and Christopher J. Fresch [Bellingham, WA: Lexham, 2016], 578–81). Nevertheless, Pennington is clear and convincing throughout.

In chapter 5, Stephen Levinsohn details the nature and benefits of discourse analysis, using Galatians as a case study. Levinsohn, a seasoned linguist and Bible translator, helpfully introduces the reader to the benefits of and need for discourse analysis. He then models a step-by-step method for determining the discourse structure of a text. This will surely be an invaluable resource for students and scholars for years to come.

Steven Runge’s chapter on constituent order in Koine Greek is impressive in its ability to take a complex issue and explain it clearly and concisely. Runge provides a linguistically based perspective on constituent order and information structure, models its application with numerous examples, and explains how it informs our understanding and exegesis of Greek texts.

I cannot do justice to chapter 7 (“Living Language Approaches” by T. Michael Halcomb), chapter 8 (“The Role of Pronunciation in New Testament Greek Studies” by Randall Buth), chapter 9 (“Electronic Tools and New Testament Greek” by Thomas W. Hudgins), and chapter 10 (“An Ideal Beginning Greek Grammar?” by Robert L. Plummer). I group them together as they are the most out of place in this book. This is to say nothing of their individual value. Indeed, they are thought-provoking essays that are worth engaging with and learning from. I particularly enjoyed Halcomb’s paper on pedagogy in the Greek classroom. Even though he and I are not quite on the same page (though I think we are close—perhaps on facing pages), it is a paper that challenged me and that will likely effect some change in my teaching. His concluding remarks were especially powerful. Nevertheless, these essays are pitched at those who teach Greek, such as myself, rather than students, and I cannot think of any instance where I would assign them. (Hudgins’s chapter on electronic tools is an exception here, as it is incredibly valuable for students, but it does not fit in a book on key issues at the intersection of linguistics and New Testament Greek.) Moreover, with a small caveat to be made for Buth’s chapter, these papers do not demonstrate the practical application of linguistics to our understanding of Greek text and our subsequent exegesis. I am glad to have read them, but their inclusion feels odd given the stated goals of the volume.

The final chapter, “Biblical Exegesis and Linguistics: A Prodigal History” by Nicholas J. Ellis, is a tour de force that examines the history of New Testament scholarship, its relationship with linguistics, and the resultant fractures within the field. It is a powerful and convicting essay that calls on biblical scholars to own their responsibility to engage with and become conversant in linguistics to be able to evaluate linguistic claims, to sharpen their knowledge, and to synthesize and disseminate knowledge. Ellis ends by surveying a few areas in Greek studies where linguistics provides practical contributions. It is an essay well worth reading by scholar and student alike, as it contextualizes the discussions in the field and motivates them to pursue excellence in biblical studies.

Benjamin Merkle’s postscript (“Where Do We Go from Here?”) reflects on the book’s contents and even evaluates some of the book’s papers. His insights are helpful, and I appreciated having him as a “conversation partner” as I reflected on the chapters and the book. Notably, given Merkle’s clear preference for some views, it is commendable that he and Black invited such a range of views to contribute to this volume.

In the end, this is a valuable book, and Black and Merkle are to be commended for bringing it together. Though some chapters feel out of place, all are thought-provoking. As a whole, the book helpfully situates the relationship between linguistics and New Testament Greek and pushes us to move forward by engaging more with linguistics, to learn from it and apply its insights to the study of Greek. As an interdisciplinarian with one foot in linguistics and one in biblical studies, I view this as positive movement and am grateful for this book’s contribution.