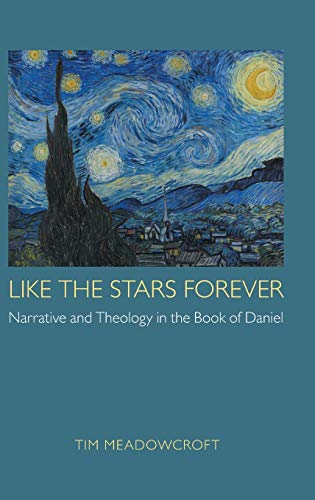 Like the Stars Forever: Narrative and Theology in the Book of Daniel

Tim Meadowcroft is a fine New Zealand evangelical scholar who has taught Old Testament at Laidlaw College, Auckland (formerly called the Bible College of New Zealand) for 25 years. His main scholarly focus has been on the book of Daniel, and eight of the nine chapters in this book have been previously published between 1997 and 2017. This means that the book will not always interact with the most recent scholarship, but it is much more cohesive than many collections of essays since its key argument is that the visions of the second half should be read as an extension to the story of Daniel in the first half. The introduction attempts to tie all the essays together, showing the progressive development of the author’s ideas. Inevitably, there is some unevenness of coverage in a collection of originally unrelated essays, so a reader should not expect that every part of the book will be covered. All of the essays deal with Daniel, although two-thirds of the book deals with the second half of Daniel.

In relation to the first half of Daniel, this is introduced by one chapter on narrative point of view, developing the analogy of the “camera angle” (ch. 1), followed by a thoughtful exploration of metaphor, especially in Daniel 2–5. Both these chapters offer astute insights into the literary features of the text. The only drawback here is that these chapters were published in 1997 and 2000. While they still provide useful interpretive insights, the choice not to update the essays means that there is no interaction with more recent scholarly sources. Chapter 3 rounds off consideration of the first half of Daniel. While its title may imply a narrow focus on one verse (4:9), it is actually a broad-ranging coverage of wisdom in Daniel 1–6. Unlike the earlier two chapters, this was first published in 2016, and so represents the author’s increasing focus on reading the book theologically.

Chapters 4, 5, and 8 can be dealt with together, as they originally appeared between 2001 and 2004 and all seem much less focused on the issue of the connection between Daniel and wisdom. Chapter 4 explores the difficult passage of Daniel 9:24–27. It is quite detailed and technical, arguing for a community understanding of the holy of holies and the anointed one/messiah. Chapter 5 explores the identity of the princes of Persia and Greece, concluding they are human figures taking part in a celestial battle. Neither of these chapters deal in any substantial way with the issue of wisdom, but they are part of his argument that the visions of Daniel need to be understood as an extension of the court tales (conflicts and contests) of the first half of the book. Chapter 8 similarly focuses on a specific passage (11:40–45), drawing out the tension between historical and eschatological readings. Much of the discussion concerns the difficulties of 6th and 2nd century datings of the section (he adopts a late date for the book in general), and the author argues for a literary solution.

While it is difficult to review nine separate essays, it is a very helpful collection of studies on Daniel. I will focus in my evaluation on the key argument in the book—that Daniel is portrayed as wise. This argument is largely found in chapters 3 and 6, with some threads drawn together in chapter 7, all of which were published in 2016 or 2017. Thus, while his earlier work (1997–2004) concentrates on more literary matters, his recent essays explore this more theological issue of the connection between Daniel and wisdom (hence the book’s subtitle, “Narrative and Theology in the Book of Daniel”). He argues that Daniel sets out the programmatic wisdom categories, which run through not only Daniel 2–7, but even 8–12. He proposes that participation in the divine life (for him, a way of re-conceptualizing wisdom) in Daniel 1–6 concerns wise action, but in the latter part of the book it “leads to wise affiliation, to loyalty, and to faithfulness” (p. 124).

Chapter 9 is the most recently written (an earlier form of it was presented as a conference paper in 2018) and interacts with systematic theologians over the issues of eschatology and election. Yet it also contains a useful recap of his argument about wisdom (participation in the divine life) in Daniel 8–12, as well as suggesting that insufficient attention has been paid to the continuity between the apocalyptic visions of Daniel and the emergence of Jesus teaching about the kingdom of God, which has ethical implications (p. 152). The brief epilogue draws out several prominent concepts in Daniel, arguing that 12:3 is the capstone to the story.

This is a thoughtful book, which shows sensitivity to the literary features of Daniel, while highlighting the value of theological readings of the text. It is not polemical but irenic, using the force of his arguments to convince readers. He helpfully draws out the community focus of several key ideas in the book (son of man, eschatology, even resurrection), and grounds his reading on a strong continuity between the court tales of Daniel 1–6 and the visions of 8–12, with chapter 7 operating as a literary and theological hinge (p. 109)

As someone with a particular focus on wisdom, I would like him to justify more his view that wisdom can be categorized as “participation in the divine life.” There was little mention of how this concept fits the foundational wisdom book of Proverbs, and it sounds much more like a Greek than a Hebrew idea. The second idea that I think needs further exploration is the link between wisdom and eschatology. While von Rad has suggested that apocalyptic has emerged out of wisdom, very few have followed his lead since the key wisdom books—and especially Proverbs—have a “this-world” focus, expecting wrongs to be righted and good actions rewarded in this life, not in the far distant future. This has rightly been seen as one of wisdom’s distinctive ideas. Wisdom undergoes some changes in the late intertestamental period (e.g., the fusion of wisdom and law in Ben Sira), but further argument needs to be provided to establish that this is also happening with wisdom and eschatology.

Yet, notwithstanding these under-explored issues, this book makes a serious and original contribution to scholarship on Daniel. It would be a useful reference for scholars and theological libraries. The book has a nine-page bibliography, as well as indexes of biblical (and some extra-biblical) references and authors.