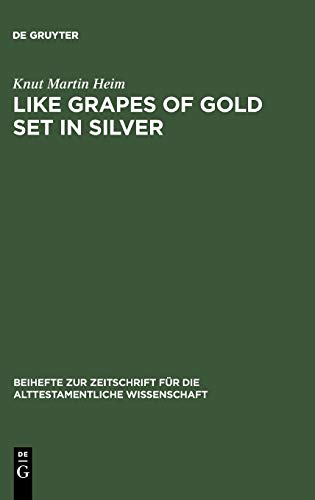 LIKE GRAPES OF GOLD SET IN SILVER. AN INTERPRETATION OF PROVERBIAL CLUSTERS IN PROVERBS 10:1–22:16, BZAW 273

This book is Knut Heim’s doctoral dissertation, submitted to the University of Liverpool and supervised by Professor A.R. Millard. Heim’s thesis is that Proverbs 10:1–22:16 is not a collection of 375 unrelated sayings, but that these sayings have been intentionally arranged into small clusters and that these clusters provide interpretative contexts for the individual sayings.

The book opens with a well-written survey of the scholarly debate on this issue. Heim finds that scholars are increasingly positive to the possibility that there is a conscious arrangement in this part of the book of Proverbs. Scholars like Scoralick, Meinhold, Murphy and Whybray have identified certain sections as coherent groupings of sayings. Heim goes one step further by dividing the whole collection into small clusters of sayings. Heim finds that wanting more carefully defined criteria for identifying such clusters and an important part of his work is his definition of such criteria.

Part two of Heim’s study is devoted to the relationship between proverbs and collections. An important point is Heim’s argumentation for the term ‘co-referential’ instead of ‘synonymous’. The point is to show that appellations like ‘wise’ and ‘righteous’ may refer to the same object, even though they are not exactly synonymous and belong within different sets of vocabulary, i.e. wisdom and moral language. Co-referentiality becomes an important point in Heim’s demonstration of coherence within his clusters and he chooses to list and compare all appellations in Proverbs 10 to demonstrate that almost all appellations in the whole collection can be co-referential.

Part three is the most extensive and consists of Heim’s attempt to reconstruct the arrangement of Proverbs 10:1–22:16. Heim divides the 375 sayings of the collection into 59 clusters, which gives an average of six to seven sayings per cluster. For each cluster Heim provides a translation and, in relation to other scholars’ suggestions, he argues for the proposed delimitation as well as supplying an interpretation that shows the coherence of the unit. In line with his criteria Heim demonstrates how both external features of language and themes of content played roles when these clusters were formed. Heim also points out many connections between clusters but abstains from reconstructing larger units.

The results of Heim’s research can best be illustrated with an example from Proverbs 13:4 which contrasts the needy sluggard with the diligent person. This saying belongs to a cluster consisting of 13:1–6 that is characterised by vocabulary of speech. This saying may seem out of place but Heim shows that it shares terminology with the surrounding verses which indicates that it should be interpreted in relation to its present context: ‘As the treacherous will eat violence and the chatterbox is ruined, so one who is too lazy to improve his (oral) abilities will not attain what he desires’ (161).

No doubt the discussion concerning the division lines between individual units will continue but Heim has furthered the research by his demonstration of possible coherence within small clusters through the whole collection. This strengthens the case for a conscious arrangement of the collection and is influential for the interpretation of individual sayings.

Heim’s book is not easy to digest and demands that the reader knows Hebrew and some terminology of both traditional exegesis and modern linguistics. What we can hope is that Knut Heim will be commissioned to write a commentary on the book of Proverbs. The groundwork is done and his model for interpreting proverbs in collections would be most fruitful for such a project.