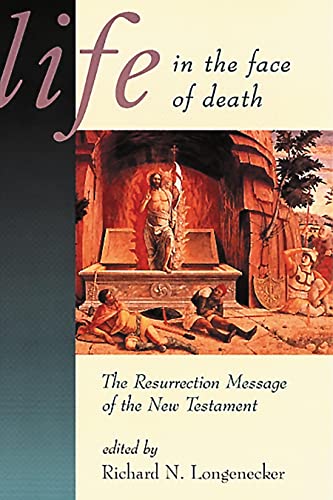 Life in the Face of Death: The Resurrection Message of the New Testament McMaster NT Series

Some evangelicals may be surprised, but Scripture relates the resurrection of Jesus to far more subjects than just apologetics and soteriology! The third text in the McMaster New Testament series addresses the significance of this event ‘for the living of life, the facing of death, and the longing for the future after death’, as editor Richard Longenecker states in the Preface. Thus it ‘resonates with most of the deepest concerns of the human consciousness’ (ix). This volume is popularly written by distilling the best of the academy for believers, in order to help them in their Christian pilgrimage as they face death (x).

Eleven distinguished scholars contribute to a text that includes four sections: background, Jesus, Paul, and the early church. After Longenecker’s Preface and Introduction, the background chapters deal with death and the afterlife in several ancient cultures. Edwin Yamauchi addresses the subject in the ancient near east, Peter Bolt in the Greco-Roman world and Richard Bauckham in Second Temple Judaism. The chapters on the teachings of Jesus include Donald Hagner’s treatment of resurrection in the synoptic Gospels and Andrew Lincoln’s exploration of John.

The section on Paul includes studies of the relation between resurrection and immortality by Murray Harris, whether Paul’s view changed by Richard Longenecker, and G. Walter Hansen’s analysis of Jesus’ resurrection as a basis for the Christian life and ethics. Early church issues include Joel Green addressing the impetus that Jesus’ resurrection gave to discipleship and mission in Acts. William Lane considers Christian living in the face of death and persecution in Hebrews. Allison Trites treats the Book of Revelation’s encouragement to believers in their confrontation with persecution and other tough times.

This book is simply packed with relevant information. It is a masterful overview bringing years of research to an intelligent, though general, audience. Most of the authors have published previously on their topics. While each chapter includes a selected bibliography, no footnotes or endnotes are given. Citations of sources—both ancient and modern—are sprinkled throughout the text. Some authors (like Yamauchi, Bolt, and Bauckham) use this option more frequently.

The three background chapters provide a wealth of extra-biblical sources, traditions, and beliefs existing in contrast throughout the ancient Mediterranean world. Yamauchi’s treatment of the mystery religions (especially 30–32) and his critique of the popular view that Judaism borrowed its views on the resurrection of the body from Zoroastrianism (39–42, 47–49) are among the most instructive portions of the entire book. The same is true, to a lesser extent, of Bolt’s mention of apotheosis (70–72).

The remainder of the volume is basically a NT biblical theology of resurrection—both Jesus’ and the believer’s. Along the way the reader is given plenty of helpful instructions for Christian living. Harris’ entire chapter is a brilliant comparison of the differences and similarities between resurrection and immortality that is a real encouragement for the believer’s eternal hope in Jesus Christ.

Following the theme of the book, other snippets provide fertile ground for further development and application. Hansen’s thoughts on the relation between Jesus’ resurrection and Christian ethics (206–209) and breaking sinful habits (212–13), Green’s linking this event to mission (239) and feeding the hungry (242), are examples. So is the encouragement provided by both Lane (254) and Trites (281–282) to stand firm during tough times. Many of these comments are devotional in nature. I was puzzled, however, that Lane had virtually nothing to say about Hebrews 2:14–15, given the theme of his chapter and the excellent opportunity for application.

The book also highlights prominent themes from recent theological discussions—like the centrality of the Kingdom of God in Jesus’ teaching (118–19), the dominance of Jesus’ resurrection throughout the New Testament (99, 122, 147), and the argument that this event confirmed Jesus’ person and message (118–20, 208, 244–45). Almost every theological chapter discusses various aspects of the relationship between Jesus’ resurrection and that of believers.

The use of critical methods is obvious throughout the volume, although not flagrant. I also wondered about the stated goal of writing popularly to assist believers in their pilgrimage through life and towards death. The application is there, but most frequently not ‘delivered’ in the way that I think the average, intelligent reader might want it. While there are certainly many wonderful insights, some who read the Preface or the back of the book may wonder how actually to bring home these lessons in real life. How are these fears quelled, or at least eased?

Still, for those who want to be both challenged and blessed by many aspects concerning Jesus’ resurrection beyond those normally discussed in evangelical volumes, this text is a treasure. Although some careful thinking needs to be done, much is contained here that might be crafted in the direction of further application.