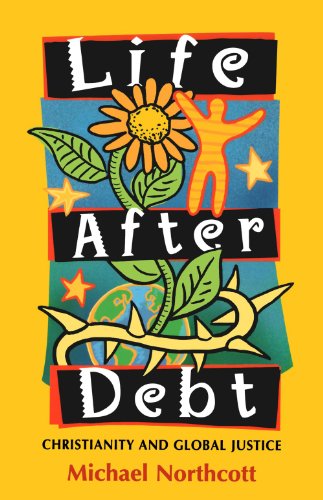 Michael Northcott has written an excellent little book expressing a determined hope for a life after debt. Its excellence lies not so much in the originality of the arguments presented, but rather in their ingathering. The author begins each chapter with a story ‘designed to draw the reader into direct engagement with the subject of the chapter through personal encounter’. These stories are composites of verbatim reports from testimonies taken by Christian Aid workers in different locations around the South. (‘South’ and ‘North’ being the terms Northcott adopts for either side of the world’s economic divide, rather than assuming a crass geographical divide.)

This is more than a post-modern stylistic choice, for the book develops a critique of markets, free trade liberalisation and consumerism that is based on the growing trend to see development in holistic, personal terms, with initiatives such as ‘barefoot banking’, credit unions and fair trade (122 ff.). In the face of the debt crisis, this critique, Northcott argues, unmasks the hypocritical self-interest that the North projects, through supposedly well-meant structural adjustment programmes run by the International Monetary Fund. Such programmes do not have as their aim the help of persons, but the maintenance of a global economic order which has the inevitably vaster Northern financial interests at heart. Northcott makes proposals for ethical regulation of the global economy by way of exploding the myth of the totally free and unregulated market. Don’t worry if you are not an economist. Northcott does not assume economic expertise in his readers although he does show that the matters of the global economy cannot be addressed simplistically, even if the root spiritual cause is simply idolatry.

Each chapter ends with a Christian theological critique of the preceding discussion. Helpfully the much used notion of structural sin is clarified: ‘For sinful structures to be built and sustained requires the actions and consent of sinful people’; elsewhere we find recourse to the biblical teaching on idolatry and gift-giving (64 ff.), a tempering of an African theology that has veered too close to political Messianism in its triumphalism (90), and a developing theme that sees the church as a necessary model of community in the world.

Refreshingly Northcott seeks to learn and engage with theologians from the South, including Pentecostal, Roman Catholic and Ethiopian Orthodox. These are geographically drawn from African, Indian and South American sources. Appended to each chapter is a discrete list of sources alongside contact addresses and web sites of relevant organisations, including both governments and non-governmental organisations. The packaging is therefore one of a publication in the social sciences.

Although this book may not appear to be one of continuous and sustained theological and moral reflection it is clear that, for the author, the response of Christianity in favour of global justice is one of obedience to evangelical truth, so that it might recognise the good in secular efforts in this area whilst not surrendering the right, under Jesus’ sovereign Lordship, to critique underlying currents of humanist ideology-idolatry (176). The theological methodology underlying the book is that of engaging in reflection upon truth, (including the truth of the present human situation), and so bringing God’s prior word to bear as the normative fund for subsequent deliberation on action. If the fully fleshed political theology is to be found elsewhere we should be all the more grateful for the author’s readiness to bring a clear unifying analysis to the disparate cases along with questions that lobby for our attention, prayer and action.