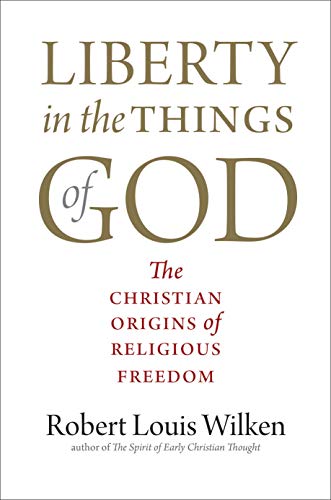 In this superbly written work, Robert Wilken, William R. Kenan Professor Emeritus of the History of Christianity at the University of Virginia, challenges the prevailing narrative that situates religious freedom almost entirely in the European ideas that emerged from the intellectual milieu of the Enlightenment. Instead, Wilken argues that many of the ideas that led towards religious freedom are grounded in the Christian tradition, reaching back to the apostolic period. 16th and 17th-century thinkers and their forbears drew upon these sources in the pursuit of religious liberty. Throughout, Wilken emphasizes freedom of conscience and free exercise as two intertwined and inseparable expressions of religious liberty. In brief, freedom of conscience means nothing if one cannot exercise that conscience in communal religious practice that conviction indicates. Alongside these, Wilken returns to three main themes throughout the work: “first, that religious belief is an inner conviction accountable to God alone and resistant to compulsion; second, that conscience is a form of spiritual knowledge that carries an obligation to act; third, that human society is governed by two powers” (p. 4). Wilken argues that religious liberty arose in the West not only from Enlightenment ideas regarding conscience but Christian ones as well.

In the first few chapters, after a brief nod to the accommodation the Romans gave to Jewish religious practice, Wilken cites both Tertullian and Lactantius as representative advocates of the position that, as a matter of conscience, religious belief could not be coerced but must be persuaded. He then quickly moves to the protocols of Milan, in which, he asserts, the emperors had more than simple toleration in mind. Medieval theologians built on those ideas, but the real work came in the Reformation period, the pivot point around which Wilken’s narrative hinges.

Beginning in chapter 3, Wilken tackles the Reformation era, rightly noting that there were many “reformations.” He challenges the traditional rubric for the era, writing “the fault line on religious liberty ran not between Catholics and Protestants but between those who ruled and those who were ruled” (p. 46). In Nuremberg, for example, the Franciscan sisters appealed for liberty in a manner analogous to Protestants; they appealed to conscience, using the “theological and moral ideas received from earlier generations”—just as Luther had at Worms (p. 53). In an ironic twist, Wilken suggests that the Lutheran reformation did not destroy Christendom’s two swords doctrine but recapitulated it at the level of the magistrate. The Peace of Augsburg’s settlement of cuius regio, eius religio makes it hard to argue otherwise. The next two chapters continue along this line of thinking. In Geneva (ch. 4), Calvin and Beza employed a revitalized two swords doctrine that, on the ground, blurred the distinction between church and state, while in France (ch. 5), bloodshed led to hope for a new way forward in the Edict of Nantes (1598). This hope proved to be short-lived with Louis XIV’s revocation of the Edict in 1685. Next, Wilken turns to the Reformation-era Netherlands (ch. 6). Long-percolating ideas regarding religious liberty were tangibly expressed by Dutch thinkers who argued that liberty of conscience is a natural right given by God and that free practice for religious communities was its corollary. The two could not be separated. From the ascension of Elizabeth I to the period of the Civil War, both Recusants (ch. 7) and Separatists (ch. 8) argued for freedom of conscience against the Church of England’s social, economic, and legal pressures towards conformity. For both, freedom of conscience must encompass the freedom to act upon the convictions of conscience in the expressions of liturgical practice and religious community that one’s conscience dictated. Here, the logical conclusions of Christian convictions regarding freedom of conscience reach their full expression for Wilken.

As the Reformation era drew to a close, the knotty question of how to disentangle church and state remained. Given the opportunity, even the Puritans enforced their brand of conformity. So it would be up to radical Separatists such as Roger Williams, Thomas Helwys, William Penn, and others to provide the only retrospectively sensible way forward: the dissolution of the state church and an embrace of a voluntary gathered church model. They rightly assessed the logical conclusion of the inchoate ideas of the patristic period regarding conscience towards which the Christian ideas regarding religious liberty had been running for a while, namely that “liberty of conscience had to include public worship” (p. 167). In the coup de grâce, Wilken demonstrates how even John Locke and Thomas Jefferson drew upon the “Christian origins of religious freedom” to articulate their perspectives.

Liberty in the Things of God is not heavy-handed in its argumentation; it is not a comprehensive treatment of religious liberty as imagined by Christian thinkers. Instead, it is a compelling and suggestive “historical essay” by one of the greatest historians of Christianity of his generation (p. 5). It should, as Wilken intends, inspire more research on the topic. In the meantime, the evidence he provides should give pause to those of us who have oversimplified the narrative regarding religious toleration as Wilken ably shows that there are “Christian origins of religious freedom,” not just secular Enlightenment ones.