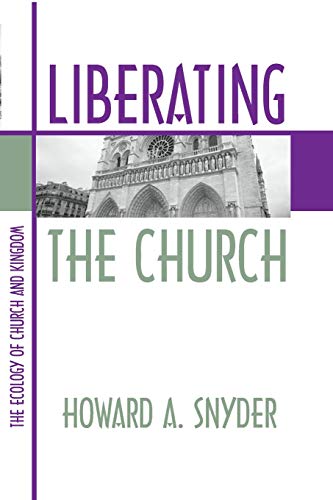 Liberating the Church: the Ecology of Church and Kingdom

Written by Howard A. Snyder Reviewed By Joel B. Green
Mission and Culture

To those interested in, and working towards, the renewal of the church, Howard Snyder should be no stranger. From his pen have come three previous studies—The Problem of Wineskins (IVP, 1975), The Community of the King (IVP, 1977), and The Radical Wesley and Patterns for Church Renewal (IVP, 1980)—each of which were significant contributions to a more mature, biblical ecclesiology. This newest volume follows in the wake of the earlier studies, probing deeply into the purpose and function of the church in the world. According to Snyder, the church’s greatest need is ‘to be set free for the Kingdom of God, to be liberated from itself as it has become in order to be itself as God intends. The church must be freed to participate fully in the economy of God’ (p. 11). How the church can be thus liberated sets the agenda for the present book.

For Snyder, the modern church suffers from nearsightedness. It is caught up in the ‘church business’—primarily concerned with self-preservation and maintenance of the status quo. Required, then, is a radical re-thinking of the church’s purpose and service in God’s kingdom. To this end, Snyder employs two key words: ecology—descriptive of the essential inter-dependence of all aspects of life on this planet; and economy—the ordering or managing of these interrelationships. With these concepts, he drives home the church’s purpose to glorify God in submission to his sovereign lordship in his kingdom which encompasses all of creation, and not just ‘spiritual affairs’. ‘God’s plan is a plan for real human history in all its social, personal, political, economic, scientific, and spiritual beauty and ugliness’ (p. 29). Snyder then proceeds to elucidate bold models for the church and its ministry. To the reader is unveiled in prophetic fashion the responsibilities of the church vis-à-visthe poor, the lost, the environment, the systems of society—that is. towards all creation.

In addition to the depth of reflection evident on every page, a major plus of Snyder’s work is his ability to be practical in both general and specific terms. Importantly, such provisons are made without causing the book to appear as a superficial, ‘three easy steps to success’ guide. So, the fundamental reorientation and restructuring of the church for which Snyder calls comes across as more than theory. For example, Snyder asserts, ‘the church’s most potent role as community is in community building’ (p. 128)—and then goes on briefly to spell out this kind of service in terms of the family, church, and neighbourhood. One might wish, however, that Snyder had specifically addressed the practicalities involved in redirecting the course of theological education and pastoral training; long term, pervasive renewal of the nature he envisions will hardly be possible until changes are made at this level.

Others may find Snyder’s study lacking in his presuppositions about the character of ministry. Ephesians 4:10–13, the pivotal passage for Snyder, is certainly important. However, it is debatable whether it outlines theNew Testament pattern of ministry. How does Snyder deal with the diversity of the New Testament portrayals of church order?

Over-all, Liberating the Church should prove a helpful, provoking tool for pastors and church leaders. It contains one of the most balanced discussions to be found on relationship of the church to the poor and on the role of women in the church. Above all, it will serve as a prophetic word compelling the church to risk itself in the service of the kingdom. It should be noted that the book was written with the American church scene in view; nevertheless, its timely message will benefit a wider audience.

A guide to the study of the prophets

Curriculum for credo: the content and aim of the church’s teaching task

Secularization: the fate of faith in modern society

by Edwin Yamauchi
VIEW ALL VIEW ALL

Ugarit and the Old Testament

Living as the people of God: the relevance of Old Testament ethics

The Revival of the Griesbach Hypothesis

Reviewed by Steve Walton
Religious Studies
VIEW ALL VIEW ALL