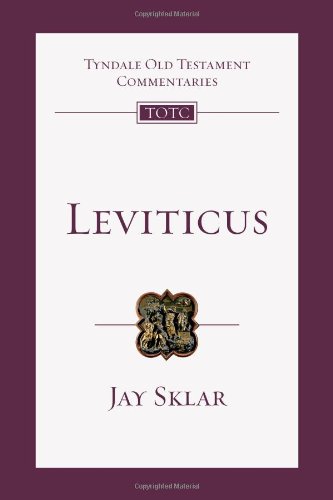 The replacement of the Tyndale Old Testament Commentaries has seen some excellent new volumes already (e.g., Tremper Longman III on Psalms), and Jay Sklar’s entry on Leviticus is no exception in taking the place of R. K. Harrison’s 1980 commentary on this book. Typical of this new Tyndale series is the analysis of the passage under three headings, ‘Context’, ‘Comment’ and ‘Meaning’. This follows an excellent ‘Introduction’ of 85 pages which covers the following: context and title, authorship and date, Hebrew text of Leviticus, theology of Leviticus, special issues in Leviticus, and Leviticus and the NT: the ‘how much more’ of Jesus.

Suitably for the series, Sklar does not go into technical issues of Hebrew, and his summary of scholarly matters is judicious and brief throughout. Footnotes are kept to a minimum. Dotted through the commentary are helpful tables, which do not always include headings but flow from the text of the commentary to make things clearer. The bibliography comes early in the book, but there are no indices as is typical of this series. The commentary is unapologetically evangelical in orientation, and apart from the appropriate sections of the Introduction, the connections and application for Christians are mostly covered in the ‘Meaning’ sections of the commentary, though always and rightly after discussing the meaning in its original context for ancient Israel. The Hebrew where referred to is transliterated, so the commentary is easily accessible for a layperson. The commentary divides the book into eight sections, with chapter 27 treated with chapters 25–26, rather than separately as most critical scholars do.

Leviticus has a reputation for being dry and dull, but this commentary is far from that. Right from the preface, Sklar anticipates that Leviticus directs us to some of the most pressing questions of our day: Who are we? Why are we here? What is our life about? Interest provoked, the commentary does not disappoint. Sklar writes lucidly and his commentary is eminently readable. His language is not too technical and he keeps a lay reader in mind always. Sklar repeatedly reminds us that obedience to the law is to be Israel’s response to a gracious God who has made promises to Abraham and rescued Israel from Egyptian slavery. He also sets the law in the wider biblical story as a gift of God to his people, and one can almost feel Sklar rejoicing with the Psalmist at the goodness of God’s law. So as he comments on the meaning and purpose of various laws, Sklar helps the reader see that the law is a good and gracious gift, righteous and attractive.

Sklar frequently uses the analogy of God being our King, with the tabernacle as his palace. Thus the laws of sacrifice and holiness are set in the context of approaching the King. The moral laws also bear witness to imitating this King’s character to the world. Such use of this theme of divine kingship, while not overt in Leviticus itself, relates Leviticus well to the Bible’s overarching story and also keeps us reminded of the bigger picture behind ritual.

It could be argued that many evangelical readers of Leviticus from low-church traditions come to the book with an aversion to ritual. Sklar draws us in to read Leviticus sympathetically, as when he helpfully explains ritual using contemporary analogies, such as weddings (p. 70) and in explaining that ritual impurity does not mean sin. Other modern examples from farming and sports (e.g., p. 202) are very vivid in conveying the importance of ritual in an attractive way.

While showing a mastery of scholarly discussions, Sklar never gets bogged down in such debates, with crisp and clear summaries of various positions and then stating his own viewpoint, or at times where undecided, leaving options open (e.g. mandatory death sentences, p. 68; meaning behind impure and pure foods, p. 168). As a more prominent example, in recent years there has been much discussion on the theology of sacrifice, with varying views on the purpose of sacrifice and the meaning of the Hebrew verb kipper. Sklar succinctly summarises the views and in his conclusion accepts both cleansing and atoning notions for this verb, since sin both makes people impure and enslaves them (pp. 50–53).

Another contentious issue in reading Leviticus has been the place of the OT law for Christians. Sklar categorises the laws of the OT into four groups: those repeated in NT, those not repeated because of cultural reasons, those not repeated because they are set aside in Jesus, and those not repeated because they were especially related to a theocratic Israelite nation. For each, he states that the values behind the laws still apply for Christians. I wonder, though, are there some laws that are not repeated in the NT simply because they do not need to be? Sklar relegates this fifth category to a footnote (p. 61) with the warning of this becoming a catch-all category, but I would resist any strategy that downplays the prominence of such laws. Would laws of homosexuality fall into that category? Or the parapet on the roof of a house (admittedly from Deuteronomy)? I would argue that there remain laws of the OT that still apply in practice, yet are not repeated in NT. Having said that, Sklar is brief but clear in drawing the reader’s attention to the principles behind the laws, and in guiding their application today. For example, tattoos no longer having pagan associations can be acceptable for Christians today (p. 250).

It is fascinating to hear the resonances of Leviticus for Majority-World Christians as I read this commentary from Asia, where I live and serve. When explaining the efficacy of animal sacrifice in the Bible, I found Sklar uses the same illustration as I do, namely, writing a cheque (‘check’ in USA!). However, this illustration doesn’t work in Myanmar and other developing Asian countries where there are no cheques. On the issue of burning fat in sacrifices, Sklar comments that in ancient Israel, ‘fat was considered the very best portion’ (p103). Unlike the Western aversion to fat, in Asia it is still the case that fat portions are valued, and it was precisely my Asian experience that alerted me to the value ascribed to fat in Leviticus. Another issue my ‘Asian’ eyes noticed was on eating blood. I had never considered this issue when I lived in Australia, but in much of Asia it is relevant and pertinent. So I was a little disappointed that Sklar only mentions Acts 15 in a footnote and says that its prohibition in Acts 15 for Gentiles is because of the risk of offending Jewish Christians, a view which does not make sense of the prohibition of fornication and idolatry in the same verses, as Richard Bauckham argues (“James and the Jerusalem Church,” in The Book of Acts in its Palestinian Setting, ed. Richard Bauckham, BAFCS 4 [Grand Rapids: Eerdmans, 1994], 415–80).

Overall, this is an outstanding commentary that will serve pastors and preachers well for at least another generation. It opens up the world of ancient Israel’s laws and ritual in a clear and understandable way, rejoicing in the grace of the law of the Lord that is more to be desired than gold, a law which leads us to the majesty and glory of Jesus.