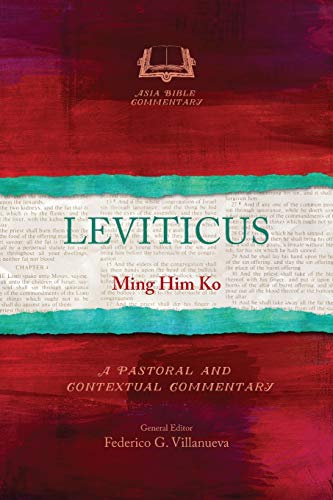 In 2015 I reviewed the outstanding commentary by Jay Sklar on Leviticus for Themelios and made a passing comment that, then living in Asia, there were a few issues that Sklar glossed over because of the Western context of both the author and the series. So it was with some interest I read Ko’s new commentary in the Asia Bible Commentary series.

This series, originally a project of and published by the Asia Theological Association, is now published by Langham under the editorship of Rico Villanueva in the Philippines. The authors come from a wide range of Asian countries and the series is certainly adding weight and credibility to Asian scholarship. Ko’s contribution adds further to that.

Ko’s handling of the text is not word for word but rather a comment on paragraphs of the text. He often cites others’ chiasms (calling them “inverted structures,” e.g., p. 220), but does not get bogged down in scholarly argument or different opinions.

At times a little more discussion of different opinions might have been useful. For example, there is surprisingly little emphasis on atonement. Yom Kippur is called the Day of Purgation (p. 147), and the main aim of the burnt offering is to “attract divine presence” (p. 21 and elsewhere throughout). I was unpersuaded by this latter understanding. He argued, without giving evidence, that the purificatory role of the burnt offering had been demoted behind its role as a gift offering (p. 18). I was unconvinced by this, and wonder whether overall he downplayed too much the idea of sacrifice as atonement. He dismisses the view that laying the hand on the animal denotes a transfer of sin, and instead thinks it denotes an acknowledgement of ownership of the animal (p. 17).

One of the weaknesses to my mind, in contrast to Sklar’s great strength, is the lack of a biblical theology or even a sense of biblical unity. Ko appeals at times to Chronicles, on which his doctorate was based, and implicitly seems to accept the JEDP reconstruction of the Pentateuch’s origins. He sees Priestly theology as building on a priestly creation theology (e.g., pp. 153, 161) and suggests Leviticus is in contest with Deuteronomy (e.g., p. 158 on Deuteronomy 12).

Having said this, Ko regularly links the text to the New Testament, often in helpful and thoughtful ways. He clearly sees Leviticus foreshadowing or leading us to Christ. Jesus is certainly the fulfilment of the rituals and sacrificial system in this commentary.

At times I would have preferred a more nuanced reflection of continuity or discontinuity between ancient Israel and Hong Kong (his main background for examples, e.g., p. 230 on land laws) and between ancient Israel and Christians. The priestly sections of the first half of Leviticus he often links to Christians via the idea of a royal priesthood (e.g., pp. 82–85), but that idea was already in place in Exodus for all of God’s people. So more nuancing might be helpful. Another example is the discussion of foreigners and aliens (p. 186), where he doesn’t distinguish carefully enough between the two in the text and thus applies it too vaguely to Hong Kong and migrant issues.

This last issue exposes again a weakness of his biblical theology. The laws of ancient Israel were, in part, to shape Israelite society as the people of God. They cannot be simply transposed into a modern country. He doesn’t appear to see the role of ancient Israel to attract the nations to God’s blessing through their holiness.

Some language struck me as odd, such as Day of Purgation already mentioned, but he also prefers to use “adytum” for the central part of the Old Testament temple rather than Holy of Holies and Holy Place. The Lord’s Supper is called the “holy supper” (p. 207) and he refers to something “seeable” (p. 238) rather than visible.

The main issue glossed over in Sklar’s commentary that is more significant in Asian practice is eating blood. Ko addresses this, but unsatisfactorily to my mind. He doesn’t see the implication of the blood prohibition in Genesis 9 applying to all humanity, and that the blood prohibition in Leviticus and Deuteronomy are both separate from the food laws. So he considers that blood can now be eaten, as all foods are now clean, and that Acts 15 applied to the context of food offered to idols in the ancient Roman Empire. So he considers eating blood to be a cultural issue, not a theological one. Acts 15, linking the blood prohibition to fornication and idolatry, doesn’t allow such an interpretation. This issue remains important and contentious in many Asian contexts.

One of the comments on Asian society I did find helpful was on Leviticus 23. Chinese and I would add Burmese, often have superstitions attached to dates and numbers, and he wisely and explicitly excludes such superstitions when commenting on Israel’s festival calendar. However, another example failed to compel, when he used disrespect of a nation’s flag as a parallel to blaspheming God’s name (p. 215). There is surely something much more personal in blaspheming God’s name than showing disrespect to a flag.

Ko’s commentary is readable, consistently wanting to show the usefulness of Leviticus for the modern Christian, Asian or otherwise. The Asian context is refreshing and the examples from Hong Kong or China are thought-provoking. My quibbles and questions show that the commentary is stimulating and engaging.