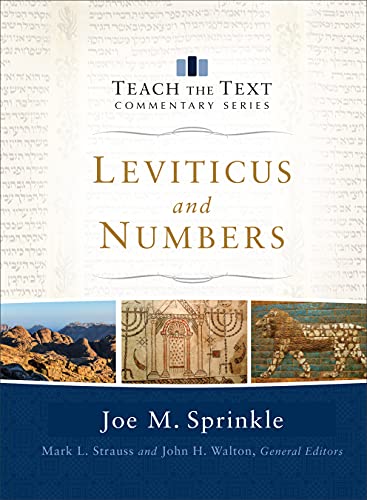 In a recent essay, John Goldingay bemoans the “uselessness for theologians and preachers of nearly all scholarly biblical commentaries written over the … [past] two centuries” because they “generated nothing that would preach” (“Hearing God Speak from the First Testament,” in The Voice of God in the Text of Scripture: Explorations in Constructive Dogmatics, eds. Oliver D. Crisp and Fred Sanders [Grand Rapids: Zondervan, 2016], 60). The Teach the Text Commentary Series aims to buck that trend. The series has been designed primarily with pastors and preachers in mind, rather than academics, while at the same time utilising the best of biblical scholarship. Its explicit goal is “to provide a ready reference for the exposition of the biblical text, giving easy access to information that a pastor needs to communicate the text effectively” (p. ix). This volume by Joe M. Sprinkle, Professor of Old Testament at Crossroads College in Rochester, Minnesota, applies these aims to the books of Leviticus and Numbers.

Following brief introductions to both Leviticus (pp. 1–5) and Numbers (pp. 185–89), the volume pursues a unit-by-unit exegesis of the biblical text. In line with the series’s guidelines (see pp. ix–x), each textual unit receives six pages of discussion. A “Big Idea” is offered as a summary of the central message of each pericope and “Key Themes” are listed. The bulk of discussion is then devoted to “Understanding the Text.” Here, Sprinkle considers contextual, historical and cultural matters before offering select interpretative insights and discussing problems arising from the passage. The section closes with consideration of theological issues raised by the pericope. To this point the commentary follows the pattern of traditional commentary, albeit not necessarily with verse-by-verse discussion. The next two sections attempt to bridge the divide between commentary and sermon. First, a “Teaching the Text” section distills a selection of application points based on the theological emphases of the passage. Second, an “Illustrating the Text” section offers potential connections between the text and life. The richness and diversity of this final section is increased by incorporating suggestions from a team of consultant pastors and teachers.

Sprinkle is a seasoned scholar when it comes to the legal texts of the Old Testament, and the benefits are evident throughout the commentary. His treatment of the biblical material is judicious and offers numerous insightful observations. At no point was I as a reader left feeling that issues had been fudged or ignored. There are of course many complex matters that the books of Leviticus and Numbers raise that cannot be treated at length due to the space restrictions of the series. Some of these, however, are taken up in “Additional Insights” excurses (e.g., “Atonement” [pp. 30–31] and “On the large numbers in the census” [pp. 196–97]). Footnotes also point readers to further resources at many junctures. This approach has the value of limiting technical discussion, thus ensuring that treatment of the text avoids becoming bogged down. An added boon is the volume’s liberal use of color photographs, illustrations and charts throughout. Not only does this shed further light on the text but implicitly develops an awareness of the ancient world for readers, which in turn deepens understanding of historical context.

While Sprinkle’s handling of the text is excellent, I was not always convinced that the big idea reflected the central message of a given pericope. Moreover, suggested big ideas tend to be assertions. While the text undoubtedly does make assertions, it is not apparent that asserting facts is always the primary intent. The force of the text may lie elsewhere. For example, the big idea listed for Balaam’s first three oracles (Num 22:41—24:13) is, “God’s will is to bless the people” (p. 344). While this assertion is true and evidently flows from the text, I wonder whether this fully reflects the illocutionary force of the passage. This section of Numbers seems rather to ridicule Balak’s “superweapon,” Balaam, by highlighting his inability to curse Israel. Thus, the implied readers are reminded of God’s unchallenged control over all nations, either inspiring confidence or rebuking them with respect to faith in God’s ability to do what he promised, no matter the opposition. That the big idea should reflect the primary illocutionary force of a passage becomes all the more important if, as Sam Chan has persuasively argued, re-illocuting the biblical text is really the fundamental task of the preacher (Preaching as the Word of God: Answering an Old Question with Speech-Act Theory. Eugene, OR: Pickwick, 2016).

Another issue arises in relation to the breakdown of the books. Leviticus is divided into twenty-eight units and Numbers into thirty-nine. However, no rationale for this division is provided. Thus, at times, I was left wondering why pericopes have been approached in the manner they have. For example, Leviticus 16 is treated as two units, vv. 1–14 and 15–34 (pp. 100–113). Yet the divine speech formulae appearing in 16:1–2 and 17:1 suggest that chapter 16 should be treated as a single unit. Thus, it is not clear why a split has been made at v. 14, or if the implication is that the chapter is best preached as two units. In fact, this seems to be an issue with the Teach the Text Series more generally. Although the introduction to the series states that units are “of an appropriate length for teaching or preaching” (p. xiii), I am not convinced that the aim of preaching is mere content delivery. Rather, getting to grips with the rhetoric of the biblical text seems essential. Thus, a division into rhetorical units may be more helpful.

Along similar lines, not every preacher will want to spend twenty-eight weeks working through Leviticus. What might a four-week series on the book look like? Or a ten-week look at Numbers? Some guidance on alternative ways to tackle the books, with accompanying rationale, would have been a valuable addition not only for this volume but for others in the series.

These issues aside, Sprinkle has produced a commendable commentary that deserves a wide reading. Those wanting to preach through these theologically vital parts of the Old Testament will derive much help from this volume.