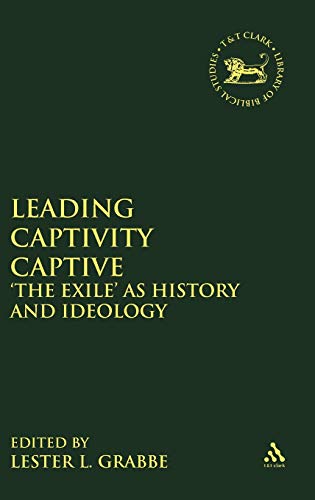 Leading Captivity Captive. ‘The Exile’ as History and Ideology

This volume consists of papers presented in July 1997 at the European Seminar on Methodology in Israel’s History, along with responses to some of the issues raised. The editor has also contributed a helpful introduction and concluding reflection. The Seminar arose in response to the methodological crisis affecting the study of the history of ancient Israel within critical scholarship. Until the 1960s, a moderately conservative consensus on the history of Israel (c. 1200–165 bce) and the use of the OT in this reconstruction was broadly accepted, depending largely on the work of Albright, Bright and Wright. However, since the early 1970s, several writers have rejected or heavily disputed the historical value of the patriarchal. Mosaic and monarchic narratives, and have proposed reconstructions of this period differing very radically from the Bible’s own account.

The Seminar’s first volume was a programmatic collection, Can a History of Israel Be Written? (Sheffield, 1997). The present work on ‘the Exile’ (the speech marks are deliberate) follows on directly from that discussion and includes essays by most of the original participants. The major concern of this symposium is with Ezra-Nehemiah (as well as 2 Ki. 25 and 2 Ch. 36). The contributors do not speak with one voice, except in rejecting evangelical approaches to the historical books (predictably labelled ‘fundamentalist’) and in taking a more sceptical view than the older consensus of the historical value and ideological character of Ezra-Nehemiah. They are also all to some degree ‘positivistic’ In their approach to historiography, with some clearly rejecting theological realism in favour of a materialist philosophy and practising a hermeneutic of suspicion towards the writers of Ezra-Nehemiah.

The contributors all agree that the concept of exile and restoration has had a profound effect on scholarship, both in the evaluation of the OT materials (cf. Wellhausen) and in the historiography of the post-monarchic period. Beyond this, a wide range of opinion prevails. Rainer Albertz compares the biblical text with Neo-Babylonian royal inscriptions, concluding that a ‘theological tendency’ in a work does not in itself refute its historical value (Hans Barstad makes a parallel point). Bob Becking deals with some of the philosophical problems of writing history and the structure of the Book of Ezra (this essay would have benefited from closer interaction with Hugh Williamson’s detailed discussion of the sources, historical context and literary form of Ezra). Robert Carroll considers that Ezra-Nehemiah is ‘contaminated’ by the interests of a ‘Jerusalem-centred ideology’ (Philip Davies makes some overlapping observations on the relation of the returnees to those who were never exiled). Lester Grabbe concludes that ‘the biblical concept of exile and return’ was based on actual events (Knud Jeppesen supports this to some extent). Thomas Thompson sees ‘exile’ as a myth of piety expressing a religious consciousness much more than a historical datum.

These diverse essays reflect a much larger set of critical (and religious) views held by the contributors; so it is impossible to come to a single judgement on the collection. They do. however, provoke the reader to think more carefully about the meaning(s) of ‘history’ as a literary construct. Evangelical readers would not share the starting point of the writers, nor most of their (sometimes rather opaque and provisional) conclusions. An excellent starting point for such readers is Phillips Long’s The Art of Biblical History (Apollos, 1994), which is a sensitive discussion on the interplay of history, literature and theology in the biblical narratives. It would be helpful to see some interaction between Long’s careful arguments and the views expressed in this volume.