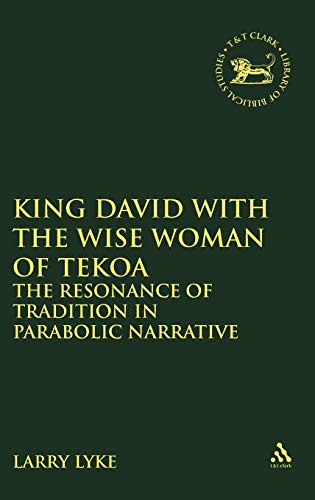 King David with the Wise Woman of Tekoa: The Resonance of Tradition in Parabolic Narrative (JSOTSS 255)

This is a slight revision of Lyke’s 1996 Harvard University doctoral dissertation. After methodological discussions, Lyke deals with the ‘mashal proper’ (2 Sa. 14:6), then 14:1–11, and finally with the whole of the Tekoite’s mashal (14:1–20).

The last words of the book summarize Lyke’s hermeneutical position: ‘interpretation is everything’. To his ‘post-modern reading sensibilities’, interpretation is not attained by ‘univocal readings’, ‘what the author or redactor wanted [the texts] to mean’, but by ‘multiple readings’ which accrue over an extended period of time, since ‘the texts represent the social and communal process of articulating core idioms and conceptualizations’ (192).

Lyke finds his methodological bases in David Stern’s works on the ambiguity of the Midrashic meshalim and Mikhail Bakhtin’s notion of ‘dialogization’, i.e. ‘the inter-relationships and dialogue between various aspects of a composite narrative’.

For this work, as the woman’s mashal hardly corresponds to the events in David’s biography, Lyke pays close attention to ‘its verbal, motivic, and thematic particularities’ for a clearer understanding of its significance, since ‘the narrative represents … a complex accumulation of overlapping biblical topoi, each of which must be interpreted within its present as well as traditionary context’. For example, Lyke compares the fratricide of v. 6 with Genesis 4:8 and notes resonance between them. Then, using Genesis 4:8 as ‘a lens by which to view the episodes of sibling rivalry in Genesis’, he moves on to the ancient Jewish traditions, which believed, for example, that Cain was the son of Sammael and that ‘each of major stories of sibling rivalry in Genesis is associated with Pesach’ (37).

Lyke devotes a fair number of pages to the views of the ancient Jewish interpreters as peerless ‘careful readers of the text’ (29). in order to find ‘the intertextual and literary resonances’ of the mashal.

This is certainly a well thought-out thesis which rigorously applies a post-modern methodology to the study of the mashal and its narrative context. Several points might be raised as criticism:

Finally, Lyke’s frequent use of terms such as ‘ambiguity’, ‘polysemous’, ‘multi-’, ‘association’, ‘allusion’ and ‘resonance’ suggests his relativistic, pluralistic, and subjective hermeneutical position, which is typical of a post-modern approach.