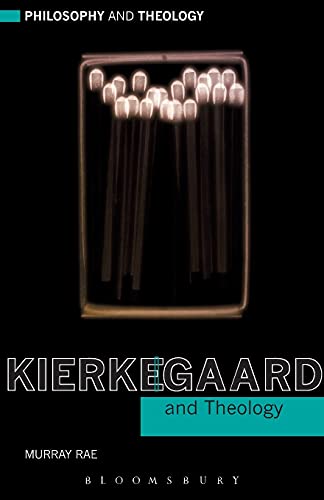 Søren Kierkegaard (1813–55) is a well-known Danish philosopher, theologian, and existentialist who criticized the works of G. W. F. Hegel, Friedrich W. J. Shelling, and Karl Wilhelm Friedrich Schlegel. Anyone endeavoring to study Kierkegaard’s writings may initially be daunted by the invocation of pseudonymous characters who display complex dialogues in the midst of competing perspectives. This is where Murray Rae’s work is an invaluable contribution to those who wish to gain an introductory exposure to Kierkegaard’s thoughts.

The first chapter thoughtfully delimits the range of his interaction with Kierkegaard’s theology and conveys the important caveat that not all scholars concur with his interpretation. Here the reader must pay close attention to the first footnote (p. 1), which indicates that other scholars (e.g., Alastair Hannay) advance a different reading from Rae. Kierkegaard has also been interpreted, for example, as fostering a consistent ambivalence towards Christianity, which Rae passionately takes exception to. The rest of the book builds upon, and in fact attempts to prove, Kierkegaard’s positive relationship with the Christian faith.

Chapter 2 is a biographical chapter that illuminates and personalizes Kierkegaard’s works. In a Christian home, Kierkegaard experienced the dark ironic reality of a depressed father who could not escape the haunting fear of having committed the unforgivable sin as a child. The reader must keep in mind that Rae does not emphasize the father’s domination or his moral failure but opts to highlight the positive facets of the father-son relationship. Rae also portrays Kierkegaard’s interactions with the Lutheran church and the Moravian fellowship that impacted much of his writings.

Chapter 3 depicts Kierkegaard’s polemics against Hegel, who averred that truth is something latent within the human soul. Hegel proposed that truth can be vitalized by the use of human reason. For Kierkegaard such a claim was averse to the very tenets of the Christian faith. Truth is not something that is already inherent within humanity; rather, humanity is estranged from truth and therefore must become accommodated to truth. In this chapter the reader can gain from Rae’s understanding of Kierkegaard’s discussions regarding objective and subjective inquiry in relation to the Christian life.

Chapter 4 is the Christology chapter. Against Hegel, L. Feuerbach, and D. F. Strauss, Kierkegaard defended the classic christological formulation of Chalcedon. Rae highlights Kierkegaard’s disdain for needless academics that shuts divine metaphysics in the ivory tower. Jesus, Kierkegaard opined, is not an abstract idea; rather, he is known in his lowly state, the sacrificial savior of the human race. In sum, Kierkegaard contended against needless pedantic banter and was disinclined to Christendom’s desire for Christ without sacrificial discipleship.

Chapters 5–6 comprise Kierkegaard’s thoughts on anthropology and Christian practice. The former delineates Kierkegaard’s hamartiology and highlights his existential component, the pitfalls and dangers of sin. He clearly outlines and argues for Kierkegaard’s close affinity to orthodoxy. However, the reader is initially befuddled when Rae states that Kierkegaard departed from the “traditional Western ordo salutis” that viewed salvation as a process initiated by the individual’s own power to discern sin (p.100). It would be helpful if Rae explained which “Western ordo salutis” he was referring to; for many in the Western tradition would not equate salvation with humanity’s ability to repent before divine aid is engendered (p. 100).

Chapters 6–7 are especially helpful in expelling common misconceptions of Kierkegaard’s theology. Karl Barth, for example, interpreted Kierkegaard as being too negative in asserting the divine “No” to human hypocrisy rather than focusing on the divine “Yes” in the forgiveness of sins. Rae proceeds to argue that Kierkegaard did not possess such a thin description of God’s relation to humanity. Rather, Kierkegaard expounded a rich pastoral theology that encompassed this divine affirmation, but this “Yes” did not abnegate the call to risk faith even when all doubt had not been completely eradicated (p. 128). Chapter seven addresses the common critique leveled against this Danish theologian, namely, the accusation of being too individualistic. Rae argues that Kierkegaard was against a certain type of “human togetherness” (p. 134), namely, the herd mentality. Kierkegaard posited, according to Rae, a relational concept of the individual that conformed more to the patterns of the Christian faith.

The last chapter attempts to place Kierkegaard in the tradition of Christian theology. Rae acknowledges once again Kierkegaard’s profound critique of the orthodox faith. True faith does not cheapen the demands of the gospel. Any orthodox theologian can resonate with Kierkegaard’s call to sacrificial discipleship, which Christendom did not always emphasize during his day.

Rae’s work on Kierkegaard is a must-read for anyone serious about or even inquisitive of Kierkegaard’s theology. As indicated earlier, Rae is able to clearly delineate the major tenets of Kierkegaard’s complex works, making intricate dialogues of pseudonymous characters sing of a lucid and harmonious chord, which gives the reader a solid framework to understanding this particular author. However, one must bear in mind Rae’s initial and concluding admission that interpreters are liable to draw upon themes that most appeal to theira priori convictions. If readers can keep in mind that Rae’s work is one of multiple interpretations, they can profit from reading this powerful work.