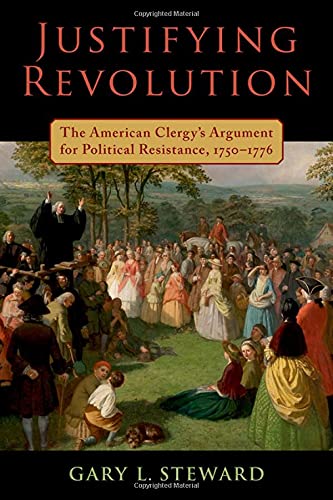 Colonial American pastors were vocal participants in debates over revolution and independence. Some opposed what they saw as rebellion, while others advocated revolution. More recently, the pro-revolution pastors have themselves been subjects for debate. Modern Christian political activists claim them as their forefathers. Other contemporary Christians see them as examples of faith being trumped by political commitments. Some academic historians have argued that the “patriot preachers” of the 1750s–70s allowed liberal, rationalist political ideology from the Enlightenment to supplant their commitment to Scripture. In Justifying Revolution, historian Gary Steward offers an insightful new study of the clergy’s arguments for revolution. According to Steward, the pro-revolution pastors of the eighteenth century were not choosing enlightenment liberalism over Scripture. On the contrary, they drew on deep traditions in Reformed theology and English legal thought.

Steward starts the story with Jonathan Mayhew’s celebrated 1750 sermon, “Discourse Concerning Unlimited Submission,” defending a right of resistance to tyrannical rule. Jonathan Mayhew was a prominent Congregationalist pastor in Boston. This sermon was one of the more famous defences of resistance to the tyranny of the era. It became a touchstone for the revolutionary generation and was reprinted again as the American colonists’ conflict with the mother country grew into a full imperial crisis. Mayhew was a theological liberal. Does this suggest a connection between religious liberalism and revolutionary political attitudes? Steward says no. Despite Mayhew’s heterodoxy in other areas, Steward shows that his arguments on resistance belong firmly in a long tradition of Reformed thinking on the duties of citizens and magistrates. Mayhew drew on decades of reflection by orthodox Calvinist English Puritans and French Huguenots.

Steward introduces readers to the pro-resistance arguments—not only of Mayhew but of numerous other American colonial preachers. He then traces the roots of these arguments to their sources earlier in the Reformed tradition and English history. After all, the American Revolution was not the first time English preachers had to grapple with the appropriate scope of the duty to obey the civil government.

As Steward explains, in the early sixteenth century, Puritans led the opposition to the Stuart monarchy’s notion of an unlimited divine right to rule. According to the Puritans and their Scottish Reformed allies, the Bible sets out a normative presumption to obey the civil government. But that obligation is not absolute. There are exceptions when a ruler has abdicated his duties to rule justly. On this view, Romans 13 builds in limitations on the duty to obey, for it describes the ruler to whom obedience is due as one who punishes evil and praises the good. Examples from the Old Testament abound in which the godly navigate unjust rulers and don’t always passively obey. Righteous kings are bound by the law of God (Deut 17:18–20) and take oaths to God and to the people to obey God’s law (2 Kgs 11:17).

In short, this biblical framework imposes duties on a king and limits the citizen’s duty to obey. As Steward explains, this informed the Reformed interpretation of English history. The Puritans in the English Civil War argued that Charles I had violated the laws of England and that the war was not an ungodly rebellion but a righteous defense of English law. Similarly, many English preachers believed the Glorious Revolution of 1688 was justified as a righteous defense of English rights and liberties against James II’s interference. Similar arguments appeared in the American colonies to justify the deposition of the royal governor of Massachusetts in 1689 after news of the Glorious Revolution reached the colony.

Steward argues that the American Revolution belongs firmly in this tradition of theological and legal argument. For Americans in the 1760s and ’70s, Parliament’s efforts to regulate the colonies were affronts to their rights as Englishmen. These rights included the ability to govern themselves through their colonial legislatures (including the levying of taxes), be tried by juries of their peers, and even have religious self-government (called into question by efforts of some to introduce an Anglican bishop to the colonies).

Steward guides the reader through this history and theology clearly and concisely. He provides a persuasive rebuttal to the historians who trace American revolutionary thought primarily to the Enlightenment and a powerful case for the importance of the Reformed resistance tradition in revolutionary America. Steward is sometimes a bit too concise, at least for scholarly readers, who might like to know more about some nuances. For instance, were there regional variations in attitudes towards resistance? (The book’s coverage skews toward New England ministers.) Were there differences among denominational traditions beyond the importance broadly ascribed to the Reformed tradition? But there is only so much a short book can cover. And for most readers, the concision will be a virtue.

Justifying Revolution is a valuable addition to the literature on American history and church history alike. Academic historians and casual history buffs will all learn new things. And pastors grappling with age-old questions about how far duties are owed to the government can read this book with profit too, as an introduction to an important line of Reformed thought about the duties owed by the citizen to the civil government.