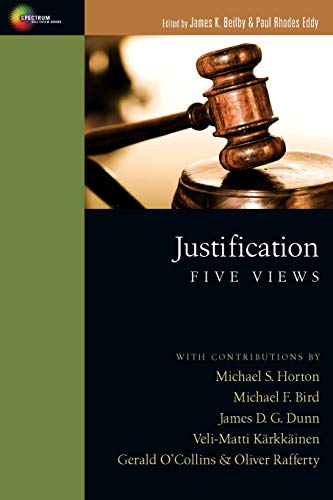 Historically the doctrine of justification has garnered ample attention, as it stood as the prominent dividing line between Protestant and Catholic understandings of soteriology. In recent years this discussion has become more nuanced, particularly with the entry of the New Perspective on Paul, as well as the new Finnish interpretation of Luther. One can quite easily get bogged down in the various details of this debate, and thus James K. Beilby and Paul Rhodes Eddy have done a great service to the church and academy in bringing together five scholars who clearly articulate the various viewpoints on justification.

Beilby and Eddy are both professors of theology at Bethel University. They have edited a number of books in the “multiple perspective” format, and this is certainly a great addition. Their purpose was to have specific scholars engage with the topic of justification and defend their position in a biblical, historical, and theological fashion (p. 10). The work begins with two chapters by the editors where they give a brief historical survey of the doctrine of justification and also delve into more recent debates, interacting most specifically with the New Perspective on Paul. Each of the remaining chapters contain the contribution of a specific scholar detailing their view on justification, followed by responses from the other four contributors who point out areas of agreement and also divergence in relation to their own view.

Michael Horton begins this volume’s contributions with the traditional Reformed view of justification, which is “functionally identical” in all significant theological aspects to the traditional Lutheran view (p. 10). Michael Bird elucidates a mediating approach between the New Perspective and traditional Protestant perspective. James Dunn capably explicates the New Perspective and its impact on understanding the issue of justification. The new Finnish view of Luther has garnered much discussion, and Velli-Matti Kärkkäinen describes how such a perspective fits well with the Eastern doctrine of deificiation, all the while demonstrating his passion for an ecumenical rapprochement on this issue. Finally, Gerald O’Collins and Oliver Rafferty represent the Roman Catholic view, and it is a helpful addition as Protestants can hear this perspective directly from Roman Catholic theologians.

This is an excellent work for introductory study—though certainly not exhaustive—on this crucial subject. The editors state in the preface that a good book dealing with multiple perspectives must address an important and debated theological issue, be capable of clear definitions, and contain positions that are identifiably distinct from one another (p. 9). Certainly this work meets such criteria. Alongside the distinct positions represented, one should note that the introductory chapters detailing the historical and contemporary factors of this debate on justification superbly summarize this topic. As such, the book is well-structured and helpfully orients the reader to the details of the debate.

In assessing the various viewpoints represented, one can note a fair degree of disparity in engaging with the biblical text. Part of this stems from the fact that the contributors are made up of both biblical scholars and systematicians. Specifically the essays by Kärkkäinen, O’Collins, and Rafferty do well in engaging with the historical and theological details of their various positions, but the biblical text, while engaged to a degree, seemingly receives short shrift. Kärkkäinen makes his view quite clear that Luther’s understanding of justification should entail a belief in theosis, “real-ontic” participation with God, and that justification is both declaring and making one righteous. One must ask, however, why Luther would be deemed a heretic by the Catholic Church should this be his view. Also, it appears that Kärkkäinen is driven in his conclusions by a desire for ecumenism as well as documents such as “The Joint Declaration on the Doctrine of Justification” (Kärkkäinen does interact frequently with Luther’s corpus). As such there is relative inattention given to biblical exegesis. Similarly, the Catholic view receives a very helpful historical treatment and a personal testimony, but Scripture is not specifically engaged. This results at times with contributors talking past one another as they seek to define their position.

While the last two chapters of this work—as helpful as they were historically and theologically—were left exegetically wanting, this is not the case with the chapters by Horton, Bird, and Dunn. While the New Perspective has been quite polemical in their castigations of the “old perspective,” it would appear in this chapter that Dunn seeks to affirm much in traditional Lutheran readings in his analysis of the biblical text. As such, his reading comes across more as a “both-and” approach, though the accent still falls on exclusion of Gentiles from covenant membership instead of a failure to keep the law of God, which seemingly misconstrues Paul’s emphasis. Bird’s chapter holds many similarities to Dunn, though he stresses that one is brought into the covenant family by means of a forensic declaration of a new status in Christ. While exegetically a very strong chapter, Bird does caricature the Reformed view on several points, particularly regarding imputation. Horton makes a strong defense of the Reformed position, affirming imputation and demonstrating that justification is a forensic, courtroom term denoting a legal status. Horton’s essay and responses to the other contributors throughout demonstrate a fitting balance of exegetical, historical, and theological rigor.

Many more details could be explicated from this work, as it is an excellent introduction to the current debates surrounding justification in the midst of a proliferation of publications on the topic. Justification is a crucial doctrine for rightly understanding issues of sin, atonement, conversion, and righteousness. As such, this work is definitely worthy of study and engagement, and is written at a level that can be read by pastors, students, and scholars alike.