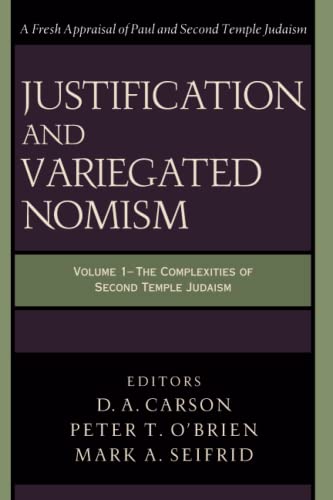 JUSTIFICATION AND VARIEGATED NOMISM: THE COMPLEXITIES OF SECOND TEMPLE JUDAISM

Written by D. A. Carson, Peter T. O’Brien and Mark A. Seifrid (eds) Reviewed By Alistair I. Wilson
New Testament

This huge volume is the first of a two-volume set on one of the most contentious issues in recent biblical scholarship and also one of the most significant issues for the church’s faith and proclamation: justification. While detailed analysis of the writings of the apostle Paul are clearly of particular significance for understanding this theological issue correctly, this volume lays the foundations for study of the NT documents by means of a careful study of Jewish literature, mostly non-canonical. Such a study is prompted particularly by the similarly substantial studies of Judaism by E. P. Sanders (especially Paul and Palestinian Judaism [SCM, 1977]), out of which came the term ‘covenantal nomism’ which has become famous as Sanders’ description for the ‘pattern of religion’ of Second Temple Judaism. While numerous studies of the writings of the NT have included some measure on interaction with Sander’s thesis, this book mark a completely different level of engagement with the Jewish materials. The Second volume which deals with Pauline texts is forthcoming.

A wide range of literature is examined as the chapter titles indicate: Psalms and Prayers (D. Falk); Scripture-Based Stories in the Pseudepigrapha (C. A. Evans); Expansions of Scripture (P. Enns); Didactic Stories (P. R. Davies); Apocalypses (R. Bauckham); Testaments (R. A. Kugler); Wisdom (D. E. Gowan); Josephus (P. Spilsbury); Torah and Salvation in Tannaitic Literature (P. S. Alexander); Some Targum Themes (M. McNamara); Philo of Alexandria (D. M. Hay); 1QS and Salvation at Qumran (M. Bockmuehl); Righteous Language in the Hebrew Scriptures and Early Judaism (M. A. Seifrid). The final chapter by R. Deines has a somewhat different character in that it examines not a body of ancient literature but a Jewish party—the Pharisees. To bring the book to a close and to prepare the way for the second volume, D. A. Carson provides a brief summary of each essay, identifies several other contributions to the debate and draws together some of the threads in nine ‘concluding reflections’. This summary chapter itself extends to forty-four pages and is a useful map for the reader who is trying to negotiate the great amount of detail in the various essays. The book is concluded with an extensive set of separate indices for ancient names, Scripture, the apocrypha, the pseudepigrapha, Qumran texts, Philo, Josephus, rabbinic literature, Targums, miscellaneous texts and subjects.

Although the level of discussion is pitched quite high, the various authors have provided a useful resource for students in the brief introductions to these Jewish documents.

It is particularly important to notice the great care that is taken by the various authors to ensure that they are working with documents which give as accurate as possible an indication of views held prior to or during the early first century. Compare this with the fact that Sanders’ devoted half of his study of Jewish texts in Paul and Palestinian Judaism to rabbinic writings, which date (at least in written form) from 200 ad and beyond.

This book is not a ‘conservative’ response to Sanders’ work. While the editors are well recognised for their conservative theological positions and several of the contributors are known evangelicals, others certainly are not. The Contributors have clearly been chosen for their competence in dealing with the primary sources rather than to ensure a unified theological position and this makes the impact of the book all the more substantial and should add all the more to the credibility of the volume’s findings.

What is the outcome of these detailed investigations? Some readers will no doubt hope to learn that Sanders’ views have been completely demolished. This is not the case. As Carson acknowledges, ‘Several of the scholars found that at least parts of their representative corpora could be usefully described as reflecting covenantal nomism’ (543). Yet, this is not to say that Sanders in vindicated. Carson concludes. ‘There is strong agreement that covenantal nomism is at best a reductionistic category’ (543) and then again, ‘covenantal nomism is not only reductionistic, it is misleading’ (544). This is the case because Sanders’ category suggests that there is more uniformity across the Jewish literature than there is and because the category does not clarify the meaning of ‘being in’ the covenant.

This book marks a distinct advance in the debate stimulated by Sanders’ work in that it addresses his thesis on his own terms, seeking to evaluate it not primarily by how orthodox its results are but by how fart it does justice to the texts it claims to reflect. While this book is no easy read and will probably not make the top of the bestsellers charts, its significance is immense and all who have the competence to read it should certainly do so.