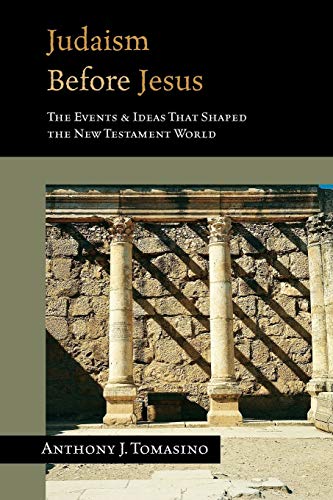 JUDAISM BEFORE JESUS: EVENTS AND IDEAS THAT SHAPED THE NEW TESTAMENT WORLD

Anthony Tomasino has attempted to produce the first basic guide to the complex field of Second Temple Judaism (ca. 516 BC–AD 70). He directs this work to ‘a Bible school student, a seminarian or a Sunday school teacher’ (8) who has little or no knowledge of the history or theology of this time period. Even though there is a plethora of books on Early Judaism, this one, so he claims, is the first that assumes a reader with little knowledge of Judaism and a ‘conservative view of the Scriptures’ (8). In light of this purpose, the author has more than succeeded.

For the most part, the book emphasises the historical aspect of the period and spends less time on the literature of early Judaism. He has one chapter on the period covered in Ezra-Nehemiah (ca. 536 BC–440 BC), one chapter on the rise and results of Alexander the Great (ca. 333 BC–200 BC), two chapters on the Maccabean revolt and the Hasmonean Dynasty (167 BC–63 BC), and two chapters on the Roman period (63 BC–AD 70). Interspersed are various chapters which deal with such issues as the origin and influence of the various sects (Pharisees, Sadducees, Essenes—see ch. 6), the impact of Hellenism on Judaism (ch. 8), and the influence of the Persian religion (Zoroastrianism) on Judaism during the Second Temple religion. Though he does not spend much time on the literature of the period, he does include a helpful summary of the Pseudepigrapha, Apocrypha, and Dead Sea Scrolls including some useful charts.

The one thing that characterises this book is its extreme readability. In keeping with his purpose, he is constantly aware that his reader may not know a Sadducee from a Pharisee, or Rome from Persia, and for this reason he constantly defines his terms. For instance, he states that he will cover the time period called ‘the Second Temple Period’ but then adds ‘515 BC to AD 70—aptly named because it was the time when the Jews’ second temple stood in Jerusalem’ (18–19). This type of clarification might seem elementary to some, but everyone has to start somewhere and thus this book makes a superb introduction to the novice reader.

Scholars, will also find this book an exciting read. The third chapter on ‘The Persian Impact on Judaism’ is a rather lengthy treatment on a much-debated issue: what strands of early Jewish theology are a product (or at least highly influenced by) Persian thought? Tomasino reveas a thorough knowledge of the issues and presents them in a clear way. The final chapter, ‘Oppression, Resistance and Messianic Hopes’, explores the various facets of early Jewish messianic hopes. Any scholar well versed in the variegated spectrum of early Jewish messianism will appreciate Tomasino’s ability to succinctly summarise the issues and present them (again) in a characteristically readable fashion.