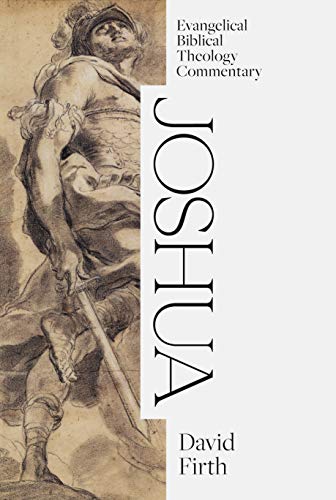 New commentary series are proliferating, and Joshua regularly is one of the first biblical books to be investigated. After Kenneth Matthews published his Joshua commentary in Baker’s Teach the Text Commentary Series (2016), and Lissa M. Wray Beal hers in Zondervan’s The Story of God Bible Commentary (2019), David Firth follows in the Evangelical Biblical Theology Commentary series of the digital-first publisher Lexham Press. The EBTC series launched in 2021 with volumes on Joshua, Daniel (Joe Sprinkle), Romans (David G. Peterson), Pastoral Epistles (Andreas Köstenberger), and Hebrews (Thomas Schreiner). It presupposes inerrancy and inspiration of the bible. The commentaries present the text of the Christian Standard Bible (CSB) of 2017. The major contribution is “a thorough discussion of the most important themes of the biblical book in relation to the canon as a whole” (p. ix), with an orientation towards Christian proclamation. This task seems to be in good hands with David Firth, tutor at Trinity College in Bristol, since he already wrote a 226-page application-oriented commentary on the book of Joshua: The Message of Joshua: Promise and People, The Bible Speaks Today (Downers Grove, IL: InterVarsity, 2015).

Although the commentary dedicates only a few pages to introductory questions and biblical theological themes (pp. 1–30, 33–66), it does not lack surprises. There are no introductory chapters on textual criticism or archaeology; rather, Firth sporadically includes these issues later in the commentary (e.g., concerning Jericho on pp. 127, 151, 164, 399, and Ai on pp. 129–30, 147–48). Regarding the date and authorship of Joshua, Firth solely depends on Brian N. Peterson (The Authors of the Deuteronomistic History: Locating a Tradition in Ancient Israel [Minneapolis: Fortress, 2014]), who assumes that Abiathar of Anathoth is the author of Judges and Samuel, editor of Deuteronomy, and compiler (not author) of Joshua. This is not a mainstream opinion, not even in conservative circles. Firth is a bit more hesitant with concrete names, but points to King David’s court as the “most likely point of origin” of the book (p. 4); dissenting evidence is dismissed. Firth starts with Hendrik Koorevaar’s fourfold division of the book (1:1–5:12, 5:13–12:24, 13:1–21:45, 22:1–24:33; De opbouw van het boek Jozua [Heverlee: Centrum voor Bijbelse Vorming België, 1990]). Drawing from the French literary theorist Gérard Genette, Firth develops the idea that Joshua 1–5 is characterized by a phenomenon called “external focalization”: the reader is purposely left without guidance about how to interpret the described events (p. 18). Of course, there is always a danger of reading the disorientation of modern readers back into the minds of the first readers, who would have had a much better understanding of spying, crossing the Jordan, and religious rituals.

The theological part of the introduction covers the themes of faithfulness/obedience, identity, Jesus, land, leadership, power/government, rest, and promise. Surprisingly, the theme of God’s presence (ark, tent) is left out; according to J. Robert Vannoy (“Joshua: Theology of,” in NIDOTTE 4:814), this is the most important topic of the book. The question of violence is dealt with twice in the introduction (pp. 24–27, 54–57; cf. 134–37, 203), and, like others, Firth argues that notions of complete destruction might be hyperbolic. The focus is not on killing innocent women and children, but city kings and their armed forces. His view does not silence but at least softens modern atheistic and humanistic objections.

The exegetical part of the commentary comprises three elements: “context,” “exegesis,” and “bridge.” Firth is not really interested in questions of literary criticism or structural analysis. Instead, he painstakingly explains the meaning of Hebrew words, and the historical and socio-cultural background of difficult terms. He tries to “feel into” the text, reflect on what the actual point of the author might be and when the reader might have expected otherwise. Important decisions are backed by references to relevant literature; however, they are not always up to date. For example, concerning the term אֶלֶף (“thousand”) in Joshua 4:13, he points to an article from 1967 (p. 108), but misses the development since then (summed up in Carsten Ziegert, “Die großen Zahlen in Num 1 und 26,” Bib 90 [2009]: 237–56).

Of course, it is always interesting to see a scholar’s decisions on controversial issues. For instance, based on Ralph K. Hawkins (How Israel Became a People [Nashville: Abingdon, 2013], 49–90), Firth assumes a late date for the conquest (p. 22). Against Josephus, Firth prefers a verbal understanding of “prostitute” (p. 84). The repeated “three days” in 1:11, 2:16, 3:2 are interpreted as an idiom like “a few days” (p. 74). The “we” in 5:1 (עָבְרָנוּ, ketiv) is ignored; the “we” in 5:6 (לָנוּ) is interpreted as referring to the new generation (p. 119). The “disgrace of Egypt” is interpreted as slavery (p. 120). Firth avoids any speculation on 5:13–15: God is present, but the warrior is neither identified with God nor his logos (p. 128). Firth believes that God has the power to delay sunset, but interprets Joshua 10:13 otherwise: there was a storm, but the sunlight was not reduced during the whole length of a regular day (p. 200). The Torah in 24:26 might be the Torah of Moses; however, Joshua did not manipulate the text but wrote an addendum on his scroll (p. 387).

I should note that the “bibliography” is merely a list of recommended literature since many of the works quoted in the text cannot be found there. Also, the fathers of the church, Calvin, and critical standard literature on Joshua (Noth, Fritz, Knauf, Dozeman, Bieberstein, van Bekkum, etc.) are missing.

Without question this commentary more than satisfies the practical purposes of the series. Even though it will not replace David Howard’s NAC commentary (1998) as the best-informed evangelical analysis of Joshua, it is a remarkable, and in some ways unique and surprising, contribution to modern conservative scholarship.