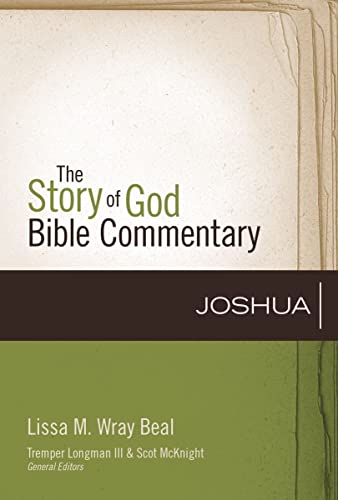 Writing a commentary on Joshua presents a daunting challenge for the interpreter, and especially so when it is written for evangelical lay and clergy readers. Joshua raises vexing questions of history and ethics that press hard on conservative sensibilities. Salient among these are the assessment of Joshua as a historical resource for Israel’s origins in Canaan and the ethical challenge of the divinely-ordered massacres related in the first half of the book. Interacting with current scholarship on Israel’s origins and with ethical critiques of divine violence, in short, has the potential to unsettle readers who may be unfamiliar with the complex issues the book raises.

Lissa Wray Beal knows her readership well and has written a commentary that succeeds exceptionally in helping readers grapple with Joshua’s historical and ethical challenges, while providing an insightful reading of the text and thoughtful reflections on how the text may be lived out by the contemporary church. The volume’s introduction offers a particularly lucid overview of what Wray Beal acknowledges as the “real interpretative challenges” Joshua sets before its interpreters (p. 20). Of particular note are her discussions of the book’s relationship to history, the problematic issue of warfare, and the narrative’s exploration of Israelite identity. On the topic of history, Wray Beal affirms that Joshua recounts actual events but reminds readers that Joshua’s theologically-rendered account of the past, when read within its cultural milieu, differs considerably from the dictates of modern historiography (pp. 26–30). The contentious issue of divine violence is addressed by a canonical exploration of the motif of the Divine Warrior, which frames the problem within the context of God’s relentless battle with destructive spiritual realities (pp. 35–39). Finally, Wray Beal explains how the narrative establishes an insider/outsider scheme that presents Israel as a community defined by covenant faithfulness (pp. 44–47), echoing a prominent argument in this reviewer’s early work.

Wray Beal explores these and other aspects of Joshua more fully in the body of the commentary. Following the series format, she guides readers through each section along three different lines. “Listen to the Story” presents biblical and contextual background material relevant to the text. “Explain the Story” then offers accessible exposition of the text in its historical context. “Live the Story” concludes the comments on the passage with reflections on the meaning of the text in the light of the New Testament and its significance for contemporary Christians. Wray Beal returns repeatedly to the themes of theology-as-history, violence, and identity (as does Joshua itself) repeatedly throughout the volume, by introducing relevant ancient Near Eastern texts, undertaking keen and lucid close readings of the text, and offering incisive expositions on the book’s contemporary relevance. Each reiteration of a theme allows Wray Beal to explore it from a new perspective. Thus, over the course of the book, the reader is introduced to the complexity of Joshua’s treatment of these and other topics and receives a wealth of resources for thinking about them.

The two sections on the campaign at Ai (7:1–16 and 8:1–29) are illustrative. Wray Beal introduces Achan’s story by asserting that it raises the question of what makes one an Israelite and then reads the story accordingly. Reflections on the story’s relevance comprise a discussion of the corporate character of sin and punishment (pp. 160–62), set in New Testament relief by the stories of Ananias and Sapphira and Paul’s discussion of unworthy approach to the Lord’s Table (pp. 167–69). Additional expositions on the Divine Warrior and on the redemption of sin follow. Her analysis of battle narrative against Ai includes diagrams and charts that illumine the narrator’s rhetorical flair, followed by a discourse on divine anger and an account of Canada’s Truth and Reconciliation Commission, cast as an example of the importance of remembering the past (pp. 190–92).

As a whole, Wray Beal’s reflections on the contemporary relevance of Joshua follow conventional evangelical talking points, which means that other ways of living the story are not addressed. There is no exploration, for example, of how Joshua might speak to resurgent nationalism, ethnic strife, religiously justified violence, or the residue of Euro-American colonialism. The silence on these and related topics is disappointing, as it signals that contentious social issues are not significant for Christian faith and mission, reinforcing the idea that the Bible has little or nothing to say about such things and intimating that readers need not interrogate their assumptions on such matters.

To recognize why this omission diminishes Joshua’s revelatory power, consider Wray Beal’s proposal that the peoples of Canaan might have been spared if they had followed the example of Rahab and the Gibeonites and confessed Israel’s God. The suggestion glosses the moral problem of Israelite conquest by effectively blaming the indigenous victims, implying that, had the peoples of Canaan not resisted the invaders, they might also have been allowed to survive “outside the camp” or as menial laborers for the conquerors. This thinking comes uncomfortably close to the logic of the Requerimiento, the Spanish conquistadors’ proclamation that indigenous peoples recognize the supremacy of the Spanish monarch and submit to the Church and which, when ignored or rejected, provided the warrant for the massacre and subjugation of the population. Viewed from this perspective, the proposal may hint at a strain of colonial thinking that lurks beneath the collective unconscious, which Joshua might unmask and address if approached with different kinds of questions.

To be sure, Wray Beal’s insightful explication of the text, along with her cogent reflections on Joshua’s significance, distinguish this volume as one of the best in the series. I am left to ponder, nonetheless, whether application-oriented series best serve readers by confining conversations on relevance to variations on familiar themes, while ignoring the ways Scripture might speak to insistent socio-political subjects. If the Bible is to speak significantly to a culture in flux, both commentators and readers may have to move out of their hermeneutical comfort zones.