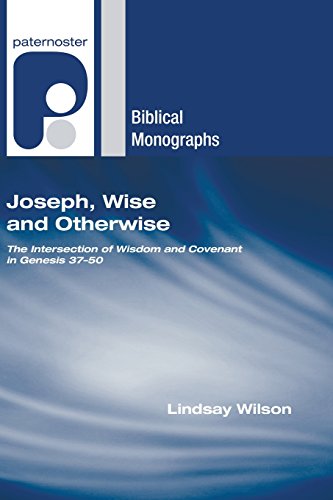 Joseph Wise And Otherwise: The Intersection Of Wisdom And Covenant In Genesis 37–50 Paternoster Biblical Monographs

In his doctoral dissertation Wilson discusses how wisdom ideas in the Joseph narrative of Genesis 37–50 relate to the themes and motifs that emerge from the Abrahamic promises. He determines that Genesis 37–50 is not ‘wisdom narrative’ but contains ‘wisdom-like elements’. Accordingly, he completes a literary analysis of the final text for wisdom-like elements. In addition, he discusses the importance of the Abrahamic promises in Genesis and the Joseph narrative. For his conclusion, Wilson describes the intersection between wisdom and covenant as ‘Joseph’s wise actions and human Initiatives enable and achieve the preservation of God’s covenant line, as well as having a wider utility’ (303).

Methodologically, Wilson’s work is sound. In the first part, he discusses the influence of ‘wisdom-like elements’ in non-wisdom texts. In his second part, he analyses five major sections, Genesis 37, 38, 39–41, and 46–50 for structural and exegetical details related to plot, character, thematic development, and wisdom influence. In his third section, Wilson emphasizes the prevalence of the Abrahamic promises in the Joseph narrative, Genesis, and the Pentateuch. This is followed with a synthesis of his literary analysis into four categories: Joseph’s public and private wisdom; Joseph’s tested character; and divine activity and human initiative. This section ends with a discussion on the embracing theme for wisdom and covenant, ‘God’s active rule’.

Wilson’s conclusions can be summarized as follows: (1) wisdom and covenant can co-exist in the same narrative; (2) ‘God’s active rule’ is the embracing theme for wisdom and covenant; (3) both of the intertwined strands assume their own validity as part of the variegated whole of the Old Testament; (4) preservation of God’s covenant people can be accomplished by ways other than divine intervention or obedience to covenant stipulation, for God uses human initiative to accomplish his purposes.

Wilson’s work is well organized with a balance of exegetical details and thematic syntheses. In his study, Wilson demonstrates that the final form of the narrative ‘has genuine integrity, regardless of its prehistory’ (304). In his literary analysis Wilson describes comprehensively how the themes and motifs come together in the major sections. In addition to interacting with the current literature, he evaluates thoroughly the repetition and relationship of words, phrases, clauses and themes for meaning, plot and character development.

As part of his conclusion Wilson has proven that ‘Joseph’s human initiatives, his ability to see what works in life and what will bring success are wisdom-like ideas which become the means God uses to preserve his covenant, and ultimately his kingly rule’ (303). He particularly emphasizes the work of God behind-the-scenes. Because of the dominance of each strand, Wilson believes that neither covenant nor wisdom is subsumed under the other, but that they function together as two strands entwined together. Accordingly, he argues that wisdom and covenant can be embraced in a broader category of ‘God’s active rule’.

It seems though, that Wilson’s emphasis on the ‘hidden activity of God’ overshadows a more helpful embracing category—‘God’s sovereign working of his covenant plan through the varied faith responses of his servants’. Although ‘God’s active rule’, applies to the Joseph narrative and the Old Testament, it does not accurately reflect the broader literary argument of Genesis. The literary development of Genesis portrays, ‘The development and preservation of God’s program of blessing and humanity’s faith response’. By faith Abraham obeyed God’s direct revelation (Gen. 12) which led to the inauguration of the covenant promises and blessing to others. In contrast, God’s covenant programme continued despite Jacob’s lack of faith and deceiving of others. The Joseph narrative shows how God preserves his people and perpetuates the seed promise through the faithful and wise initiatives of Joseph. The narrative shows that Joseph’s wise initiatives were borne out of a faith relationship with God despite circumstances of ambiguity and pain.

In conclusion, I wholeheartedly recommend this work to those desiring a more comprehensive understanding of the relationship between wisdom and covenant. Wilson’s literary analysis and synthesis are enlightening. His discussion helped in understanding both the descriptive meaning and theological implications of the Joseph narrative. Furthermore, his discussion on the intersection of wisdom and covenant was helpful for appreciating the work of God behind-the-scenes.